It’s long been common wisdom that one of the safest places to keep your cryptocurrency holdings is in a hardware wallet. These are small, portable devices that encrypt your keys and offer a bit more peace of mind than holding your coins in a soft or web wallet. 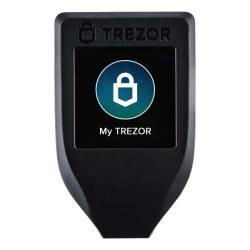 But of course, as we know, nothing is totally secure.

And we were reminded of this fact by Kraken Security Labs, when they showed us how they bypassed all of the safeguards in a popular wallet, the Trezor, to dump and decrypt it’s seed.

It’s worth noting that the hack does require physical access to the wallet — albeit only about fifteen minutes worth. And by “physical access” we mean that the hack leaves the device thoroughly mutilated. The Kraken team started by desoldering the heart of the wallet, a STM32 processor. They then dropped it into a socket on an interface board, and got to glitching.

The hack relies on an attack known as voltage glitching. Essentially, at a precisely-timed moment during the device’s boot sequence, the supply voltage is fluctuated. This enables the chip’s factory bootloader, which can read out the contents of it’s onboard flash memory. The memory is read-protected, but can be accessed 256 bytes at a time through a second voltage glitch. Neither of these attacks work 100% of the time, so if the device fails to boot or the memory remains locked, the FPGA performing the attacks simply tries again. After enough iterations, the Kraken team was able to fully dump the chip’s flash memory.

There’s one more hurdle here —  the memory dump is encrypted. Enter brute forcing. Trezor devices allow a maximum pin code length of nine digits, but if you assume the average user’s pin is only four digits then it can be guessed via an automated script in a matter of minutes. Even a longer pin can be worked out in a matter of days or weeks — certainly within the realm of possibility. This yields the seed, which could then be entered into a new hardware wallet to effectively steal any cryptocurrency assets that lived on the original device.

So, aside from some cool hardware hacking techniques, what can we learn from the Kraken Security Lab’s work? First up, for any designers out there, the STM32 is not suitable for high-security applications. For all the end users, this doesn’t mean you need to trash your Trezor (even though this isn’t the first wallet hack we’ve seen). It does mean that you should keep it away from other people, and that you should enable the BIP39 passphrase, which Kraken says can protect against the attack. Perhaps most importantly, this serves to remind us all that nothing is 100% secure.

30 thoughts on “Hacking Hardware Bitcoin Wallets: Extracting The Cryptographic Seed From A Trezor”