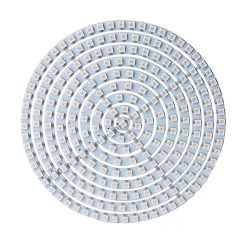 The rings aren’t wired together, and it seems like these are designed to be separated, but it’s pretty easy to wire them together in order to have a circle of individually accessible RGB LEDs.  Each hand of the clock is a different color and is antialiased to give a smoother look, since the LEDs don’t line up.  [Clueless] wanted the second hand to rotate smoothly, so it is updated using the milliseconds as an offset to the second.  An ESP8266 runs the code and controls the LEDs getting the time from an NTP server. Occasionally, [Clueless] has the clock display a quick effect, such as a Pac-man or a radar scan animation.

All the files are up on the Github page, including the Blender models for the case, available to build your own and a simple search for “241 LED ring” turns up the LED hardware used. There are plenty of clock projects on the site, like this multicolor LED ring clock and we’re sure that you can find something interesting.

5 thoughts on “Circle Full Of LEDs Becomes A Clock”