For as raucous as things can get in the comments section of Hackaday articles, we really love the give and take that happens there. Our readers have an astonishing breadth of backgrounds and experiences, and the fact that everyone so readily shares those experiences and the strongly held opinions that they engender is what makes this community so strong and so useful.

But with so many opinions and experiences being shared, it’s sometimes hard to cut through to the essential truth of an issue. This is particularly true where health and safety are at issue, a topic where it’s easy to get bogged down by an accumulation of anecdotes that mask the underlying biology. Case in point: I recently covered a shop-built tool cabinet build and made an off-hand remark about the inadvisability of welding zinc-plated drawer slides, having heard about the dangers of inhaling zinc fumes once upon a time. That led to a discussion in the comments section on both sides of the issue that left the risks of zinc-fume inhalation somewhat unclear.

To correct this, I decided to take a close look at the risks involved with welding and working zinc. As a welding wannabe, I’m keenly interested in anything that helps me not die in the shop, and as a biology geek, I’m also fascinated by the molecular mechanisms of diseases. I’ll explore both of these topics as we look at the dreaded  “zinc fever” and how to avoid it.

One of the first things you’ll notice if you research zinc fever is how hard it is to find useful information. Googling “zinc fever” will get you a load of articles about using zinc supplements to stave off viral infections, not to mention other medically dubious uses for zinc. That’s partly thanks to living in these pandemic times, but also shows the unusually high noise floor that attends most searches for actionable medical information, as opposed to anecdotes. 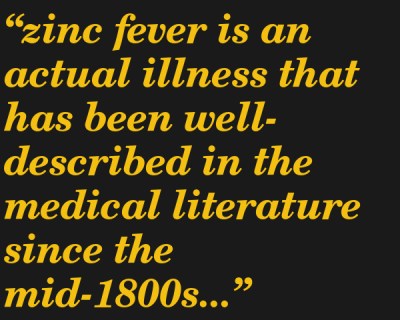 Thankfully, though, I was able to dig deep enough to discover that what’s called zinc fever is an actual illness that has been well-described in the medical literature since the mid-1800s. It goes by a wide range of names, from the wonderfully medieval-sounding “brass founder’s ague” to “the galvie flu”, all of which reflect the fact that this is largely an occupational hazard of the metalworking trades. The illnesses all fall under the broad category of “metal fume fever” or MFF.

The metal most strongly associated with MFF is zinc, either alone or in alloy with other metals — hence the association with brass, an alloy mainly composed of copper and zinc. Other metals that can cause the illness pretty much run the gamut of commonly worked metals; the most common culprits after zinc are chromium, cadmium, and copper.

Metal fume fever typically presents as a sudden onset of classic flu-like symptoms — fever, headache, muscle and joint aches, fatigue, nausea, and violent chills. Symptoms usually begin within a few hours of exposure to metal fumes, either via welding, grinding, or foundry operations. Diagnosis is typically made based on the history, as opposed to any blood tests or other diagnostics; basically, someone who presents to an emergency room with flu-like symptoms who reports welding within the last day or so will get a presumptive diagnosis of MFF, after ruling out other possible causes.

In almost every case study and review on MFF that I could find, the course of the illness was characterized as “self-limiting”. This is medical shorthand for “it’ll go away in a couple of days,” and indeed, for most metalworkers that’s clearly the case. While some people who’ve gotten MFF report a week or so to get back to feeling normal, most are up and around again after just a few days of feeling really, really crappy.

Most, but not all: take the extreme case of Jim “Paw-Paw” Wilson, a blacksmith of some renown in the smithing community. Back in 2005, when Jim was 65, he was building a stock rack from surplus galvanized pipe. Knowing the dangers of zinc fumes, Jim attempted to burn the coating off some pipe fittings in a gas-fueled forge. He apparently charged the forge with too many fittings at once, which filled the shop with billows of thick, white zinc oxide smoke. The smoke was so thick that it left deposits of zinc oxide 1/16″ (1.5 mm) thick on the inside of the forge.

As he probably had multiple times in his metalworking career, Jim took ill with the classic symptoms of MFF shortly after that forge session. He felt well enough within a few days to take a trip, but a week after the exposure he came down with bilateral pneumonia, which killed him the next week. While it’s true that Jim suffered from emphysema before the forge incident, and that probably contributed to the outcome, the fact remains that he likely would not have gotten the pneumonia that killed him had he not tried to burn off those fittings.

Although Jim’s case was an extreme one, both in terms of the amount of zinc oxide fumes produced and the victim’s underlying medical issues, it does illustrate the point that MFF can be dangerous under the right conditions. However, the risk of dying from MFF seems to be quite low. I couldn’t find much information about the epidemiology of the illness except that there are an estimated 1,500 to 2,500 cases per year in the United States, about 700 of which were reported to poison control and a third of which required medical treatment1. It’s not clear from this review whether any of these cases resulted in death, but it’s probably safe to assume that the authors would have mentioned any deaths that had occurred.

Speaking of poison control, an interesting aspect of MFF was revealed by a 2012 review of data from poison control in Victoria, Australia2. They plotted the number of calls to poison control against the day of the week that the incident occurred, and found that Monday was by far the most likely time for someone to come down with MFF. This goes along with one of the alternate names for MFF, “Monday morning fever”, and may have to do with a certain degree of tolerance that the body builds up with extended exposure to small amounts of metal fumes. The thinking is that after a weekend away from the shop, the body’s ability to deal with the zinc toxin has decreased, making it more likely to cause symptoms after a weekend away from the shop.

This is all well and good, but what about the meat of the problem: how do metal fumes cause flu-like symptoms? Put simply, we just don’t know. The mechanism doesn’t appear to be well studied, possibly due to the fact that the illness is generally self-limiting and non-fatal. But it’s likely that what causes the symptoms experienced during a legitimate case of the flu — or, as we’ve learned the last year, a coronavirus such as SARS-CoV-2 — also causes the symptoms of MFF. So the blame falls on the human immune system, with activation of white blood cells called neutrophils; the release of cytokines, signaling chemicals related to inflammation responses; and formation of oxygen radicals. These form the biochemical brew that makes you feel so bad during the flu, and it’s thought that zinc oxide and the other metal vapors associated with MFF somehow trigger their release too.

Another clue as to how MFF happens is revealed by looking at that “Monday morning fever” aspect of the illness3. The ability to develop tolerance to metal fumes over time is thought to be related to the expression of metallothioneins (MTs), which are sulfur-rich proteins that are specialized for binding metal ions in the body. A single human MT molecule can scavenge up to seven zinc ions, sequestering them and preventing them from doing whatever they do to activate the immune system. Small amounts of metal ions are thought to stimulate MT expression, which tracks with building up a tolerance over the workweek. In the absence of stimulus, though, like over a weekend away from the shop, expression of MTs is down-regulated, meaning the hapless welder who gets a big dose of zinc on Monday likely has a reduced ability to deal with the threat.

And because someone is sure to mention it in the comments, we’ll point out that old-school welders swear by the drinking of copious quantities of milk before welding anything with zinc in it to stave off the symptoms of MFF. There are plenty of anecdotes out there about how well this works, and there’s speculation that the calcium in the milk somehow blocks or competes with the zinc ions. But given that most recommendations are for drinking four or more liters of milk, and that it has to be done before welding starts, it’s probably not going to be practical for most people as a prophylactic method.

So, what’s the take-home message on metal fume fever? I think, first and foremost, that welders need to realize that it’s a real illness and not just some old wives tale. From all accounts, the illness is self-limiting and temporary in nature, but unless you have underlying medical conditions, it doesn’t seem likely to kill you. Given how debilitating flu-like symptoms can be, though, I’m not sure why anyone would even flirt with something that will make you feel like that, even if only for a couple of days. If I absolutely had to weld something galvanized, I’d make sure to do it with some sort of positive-pressure respirator, with fume extraction, or even outdoors to keep those noxious fumes away. Better to be overly cautious than to be laid up for a couple of days with symptoms that could easily be confused for something else, especially in this day and age.

69 thoughts on “Zinc Fever: A Look At The Risks Of Working With Hot Metal”