A Breath of Fresh Air 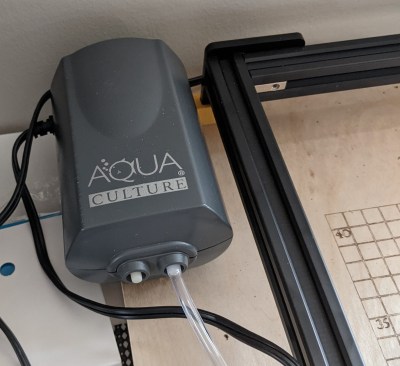 By the end of the last post, I had installed an air assist system but cut the air hose off of it because I never did get around to boiling some water to bend the air tube. However, it did let me move the laser head up and down easily, which is very useful.

This wasn’t the first air assist design I’d tried. If you look at Thingiverse, there are many different takes on this. Some have 3D printed nozzles that take an air needle or a 3D printer nozzle. Some just direct fan air at the part.

I found some just didn’t fit or didn’t work well. Others would interfere with the X stop or interfere with the Z motion of the laser which, admittedly, wouldn’t have been a problem on a stock machine. One of the designs had a custom top plate for the laser that had a little hose guide and even though I didn’t keep that air assist project, I didn’t remove the custom top plate and that turned out to be lucky, as you’ll see.

I had really been interested in putting an air assist on ever since I saw [DIY3DTech’s] video on how it improved cutting. I had even bought a small air pump for the purpose before the laser even arrived, but it mostly sat, unused, for lack of a good way to direct the air.

Finally, I found [DIY3DTech’s] design that is very quick and simple to print. A bracket circles the laser head and mounts a small tube holder. You can adjust the angle and a 3D printer nozzle is wedged into the end of the tube. It is a simple design, but very adjustable.

Of course, there’s one small problem. If your laser head doesn’t move, the bracket is no problem. But if you can slide the laser up and down, the bracket needs to clear the big acorn nuts that hold the laser to the X carriage.

At first, I tried putting some washers to move the laser body away from the housing, but that didn’t seem like a great idea — I worried it might not be very stable if there were too many washers and I would have had to fish up some longer bolts. Instead, I did some surgery on the bracket and cut away the offending part, leaving it shaped like a U with the sides about 3cm long. Of course, that removed the fixing screw and made it not grip very well. However, a little double-stick tape nicely holds it on. You could probably also use some hot glue.

A nylon bolt — which could probably be shorter — holds the black hose module to the white bracket. It also grips the tube, so don’t tighten it all the way or you’ll pinch the airflow off. A nylon nut locks it in place. Placing the nozzle in the tube is a bit of a challenge. You might heat the hose a little, but I didn’t. I just used needlenose pliers to stretch the tube in both directions and threaded the nozzle into the widened tube. I didn’t seal it, but a blob of hot glue or silicone might be a good idea.

The only other part of the air assist isn’t strictly necessary. I had a top plate from another air assist attempt still mounted to the laser and it had a little feed tube for the air hose that works well with this design, so I kept it. It keeps the hose lined up nicely and you can also bundle the hose with the rest of the wires if you want to keep it from flopping around everywhere.

Does it work? It does! Cutting out thin plywood takes only a few passes now and seems to make cleaner cuts. The accompanying picture shows a small test piece on 2mm plywood. Using 2 passes of the laser cut the outline perfectly and — looking close up — it appears I could even cut the engraving power down. Without magnifying it, though, it looks fine.

By the way, these cuts were with what Ortur calls a 15 W laser and using the standard lens. Keep in mind, though, the 15W number is the input power. The actual output power is probably just north of 4W.

Another side effect of the air blowing from the right? You can see all the smoke now hangs to the left side of the machine.

Speaking of smoke, you do need ventilation and that’s one thing I’m not finished working on. I’m still trying to figure out exactly what I want to do. A vent hood or an enclosure with an exhaust seems ideal but a pain to set up. For now, I have an open window with a dual window fan set to blow out.

Wood doesn’t smell too bad, but leather does. I understand, too, that some glue in plywood and some tanning chemicals in leather produce very nasty fumes, so this is one downside to these machines. If you think printing ABS smells, you aren’t going to enjoy an open laser cutter very much.

For now, though, I’m pretty satisfied with the results this modest machine can provide. If you really need a laser cutter for commercial purposes, you are probably going to look elsewhere. But if you want to spend about what a fair 3D printer costs and add a lot of capability to your workshop, you could do worse than one of these inexpensive engravers.

Read more from this series:
Ortur Laser How To

13 thoughts on “Hacking An Air Assist For The Ortur Laser”