Let’s start with messages. Dolphins and primates are closer to us than any alien we can imagine, and yet although we have known for a while that dolphins talk to each other, we have no idea what they are saying. It won’t be easier with the aliens.

Recently I read Extraterrestrial Languages by [Daniel Oberhaus]. The book tackles the question: can we communicate with ET? There have been many serious attempts to send things to aliens that they could interpret, but some of the efforts have been little more than stunts. After all, it would be tricky to decode an unknown audio or video format from Earth, and you have some idea what it ought to sound or look like. Only on Star Trek does your video from an alien spacecraft come out perfect on your viewing screen.

The more you think about the problem, the thornier it gets. For example, do aliens use sound to communicate? Can they hear the same range of sounds we hear? Do they see more colors, fewer colors, or do they not have vision as we understand it? Moles are blind, after all, and they seem to do fine. Maybe our alien neighbor sees radio waves or senses electric charges, who knows?

Then there’s the frame of reference. If you’ve ever traveled to a land where you don’t speak the native language, you know how frustrating that can be, and yet we have a lot of common ground with the typical Earth resident. [Oberhaus] points to papers that question if even math is universal — a supposition made by many attempts at alien communication. Personally, I think math has to be universal but apparently some smart people say that it could just be something we make up so aliens might have a different reality of math. [Oberhaus] even has a chapter suggesting art might be a more suitable universal language. Given that I only understand about half of human art, I’m not sure I agree.

In any case, it is a difficult task. [Frank Drake] a well-known name in searching for extraterrestrials, created a test message of 551 bits that you could arrange as an image. The number 551 is semiprime, so that’s a clue as to the layout of the bits. Upon sending the message to nine prominent researchers, only one seemed to have any idea it was an image and replied with an image of a martini glass. Some Nobel laureates did no better. One decided the string was an approximation of the number describing the position of electrons in an iron atom. And these were fellow humans. 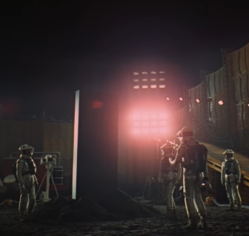 What if you found an alien artifact or stumbled onto an alien transmission. Would you know? After all, if you found, say, a calculator made in another country that didn’t speak your language, you’ll still expect it to have many identifiable components and you could probably figure out its operation. An alien calculator might look like anything, and there’s no telling what a resistor, a capacitor, or an IC would look like even assuming it uses analogs of those. The same goes for a transmission. Even though there are many types of digital and analog modulation in use by humans, you have some idea of what you are looking for and what the result will look like or sound like when you are done.

Our challenge to you, then, is twofold. If an alien artifact dropped from the sky, what would you do with it? This would be the most amazing reverse engineering job ever. You could assume nothing and you probably only have one priceless copy to experiment on. A 20 cm gray cube (or large black monolith or a giant solar sail) lands on your desk. Do you open it? How? What if it is full of some gas that is essential for its operation? What if it is extremely radioactive inside? What if it is made to detonate if tampered with? None of those things are terribly far-fetched. What’s more is, how do you know the cube isn’t the alien itself or its spacesuit or vessel? Opening it could be considered quite unfriendly!

The second challenge: A signal comes in and you are pretty sure it is from an intelligent alien. How do you decode it and what would you do to respond to it? Turns out that [Drake’s] test message was eventually published to the public and an electrical engineer in Brooklyn successfully decoded it. So we expect Hackaday readers could do well at this task.

Tell us your approach to either or both in the comments.

112 thoughts on “Ask Hackaday: If Aliens Came By, Would We Even Notice?”