You don’t have to look very hard to find another rousing success by SpaceX. It’s a company defined by big and bold moves, and when something goes right, they make sure you know about it. From launching a Tesla into deep space to the captivating test flights of their next-generation Starship spacecraft, the private company has turned high-stakes aerospace research and development into a public event. A cult of personality has developed around SpaceX’s outlandish CEO Elon Musk, and so long as he’s at the helm, we can expect bigger and brighter spectacles as he directs the company towards its ultimate goal of putting humans on Mars.

Of course, things don’t always go right for SpaceX. While setbacks are inevitable in aerospace, the company has had a few particularly embarrassing failures that could be directly attributed to their rapid development pace or even operational inexperience. A perfect example is the loss of the Israeli AMOS-6 satellite during a static fire of the Falcon 9’s engines on the launch pad in 2016, as industry experts questioned why the spacecraft had even been mounted to the rocket before it had passed its pre-flight checks. Since that costly mistake, the company has waited until all engine tests have been completed before attaching the customer’s payload.

But sometimes the failure isn’t so much a technical problem as an inability for the company to achieve their own lofty goals. Occasionally one of Musk’s grand ideas ends up being too complex, dangerous, or expensive to put into practice. For instance, despite spending several years and untold amounts of money perfecting the technology involved, propulsive landings for the Crew Dragon were nixed before the idea could ever fully be tested. NASA was reportedly uncomfortable with what they saw as an unnecessary risk compared to the more traditional ocean splashdown under parachutes; it would have been an impressive sight to be sure, but it didn’t offer a substantive benefit over the simpler approach.

A similar fate recently befell SpaceX’s twin fairing recovery ships Ms. Tree and Ms. Chief, which were quietly retired in April. These vessels were designed to catch the Falcon’s school bus sized payload fairings as they drifted down back to Earth using massive nets suspended over their decks, but in the end, the process turned out to be more difficult than expected. More importantly, it apparently wasn’t even necessary in the first place.

Credit where credit is due, both Ms. Tree and Ms. Chief did successfully catch fairings during their tenure with SpaceX. The ships proved the concept was viable, and on two missions in 2020, they even managed to capture both fairing halves. But taken as a whole, their success rate was quite poor. According to a tally from SpaceXFleet.com, of the 37 missions on which one or both ships attempted to recover the fairings, they only managed a total of nine catches. That’s already a pretty bad average, but when you realize each mission actually has two fairings that needed to be caught, it’s abysmal.

The low success rate is bad enough, but even when the ships actually nabbed one of the fairings in mid-air, it didn’t always end well. During the October 18th, 2020 Starlink mission, the live video feed from Ms. Tree briefly showed a fairing ripping through the net and smashing down onto the deck. With each fairing half estimated to weigh approximately 950 kilograms (2094 pounds), having one break lose presents a clear danger to the crew and equipment aboard the recovery vessel, to say nothing of the fairing itself. After all, the goal is to recover them intact so they can be used on a subsequent flight.

It might seem odd that SpaceX had so much trouble catching these relatively large and docile objects as they drifted down to the surface under their parafoils, especially when compared to the fire and fury of the Falcon 9’s first stage landing. Over the last three years SpaceX has managed to maintain a success rate of around 90% for booster recoveries at sea, and at least on the surface, it would seem both procedures are more alike than they are different.

But ultimately, it’s a question of command authority. The active grid fins and thrust vectoring capabilities of the Falcon 9 make it far more maneuverable on descent than the steerable parafoils used by the fairings. Even with the recovery ship actively communicating with the fairing’s own avionics and attempting to plot an intercept point, a strong gust of wind at the wrong moment was all it took to knock them off course.

From the beginning, SpaceX believed that they’d need to catch the fairings with a net because allowing them to come into direct contact with salt water would damage them beyond the point of economical repair. While specific details are hard to come by publicly, it’s widely believed that the concern stemmed not so much from the electronics onboard, which could presumably be waterproofed, but the unique construction of the fairings themselves. Made from an aluminum honeycomb structure sandwiched between layers of composite material, water intrusion could be a serious problem; as once salt water got inside the structure of the fairing itself, getting it back out quickly and economically might not be possible. 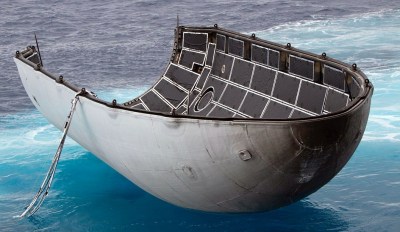 But in the face of a recovery program that seemed to be going nowhere, the engineers at SpaceX have apparently figured out a way to make it work. Closeup photographs of recently constructed fairings show that various vents and openings have been relocated so they’ll be higher from the surface of the water, and rumor has it that the internal sound dampening panels are now considered a consumable and discarded after each mission rather than trying to dry them out. What, if any, steps were taken to prevent water from seeping into the  fairing’s aluminum/composite construction is currently unknown.

While the refurbishment process for these “wet” fairings is undoubtedly more costly and time consuming than if they had been caught in the net, the difference is evidently not enough to justify the continued operation of Ms. Tree and Ms. Chief. Instead, SpaceX has chartered the much larger Shelia Bordelon to take over as primary fairing recovery vessel. Intended for underwater research, the 78 m (256 ft) long ship features wide open decks, a built-in crane, and a Triton XLX remotely operated vehicle (ROV) that can dive down to 3,000 m (9,840 ft).

The integrated crane makes it easier to pull fairings out of the water and drop them on the dock, but otherwise, this vessel doesn’t seem particularly well suited to the task at hand. For one thing, its underwater capabilities are being completely squandered. But more importantly, the rapid launch cadence demanded by Starlink missions means that the recovery vessel should ideally be able to hold four fairing halves before returning to port. So either the Shelia Bordelon is going to be getting some modifications of its own soon, or SpaceX is only using it temporarily until they can come up with a long-term solution.

91 thoughts on “SpaceX Drops The Ball On Catching Fairings”