On February 22nd, a Falcon 9 rocket lifted off from Vandenberg Air Force Base in California and successfully delivered into orbit an Earth-observation satellite operated by the Spanish company Hisdesat. Compared to the media coverage received by the launch of the Tesla-laden Falcon Heavy earlier in the month, this mission got very little attention. But that’s hardly surprising. With respect to Hisdesat, the payload this time around was not terribly exciting, and even the normally dramatic landing of the Falcon 9’s first stage was skipped in favor of simply allowing the booster to crash into the ocean. 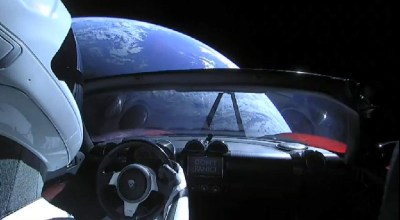 As far as SpaceX launches go, this one was about as low-key as they come. It wouldn’t be a surprise if this is the first time some readers are even hearing about it. But while it didn’t invoke the same media circus as the images of a spacesuit-wearing mannequin traveling into deep space, there was still a historic “first” performed during this mission.

In an effort to increase the re-usability of the Falcon 9 booster, SpaceX attempted to catch the payload fairing (essentially a large protective nose cone) with a huge net as it fell from space. The most interesting thing about this new chapter in the quest for a fully reusable rocket system is that while SpaceX is generally considered to be pioneers in the world of bringing hardware back from space, this particular trick dates all the way back to the 1960’s.

At first blush using a net to catch huge, falling objects sounds preposterous — like something out of Wile E. Coyote‘s bag of tricks. But remember this is a company that has made a name for itself largely based on being able to land rockets on their tails Buck Rogers style. It’s fair to say that SpaceX is not a company overly burdened by the status quo.

As comical as the idea might seem, the logic is sound. Due to the downrange distance at which the fairing is released, it has to come down in the ocean. But even if the fairing could be gently lowered into the ocean with parachutes, it contains active components (thrusters, avionics, parachutes, etc) which would need to be protected from water. But more importantly, the very construction of the fairing makes water landings a dicey proposition. It’s made of an aluminum honeycomb sandwiched between layers of carbon fiber; reliably waterproofing such a structure, to say nothing of draining water out of it in the event the waterproofing failed, would be difficult to say the least.

This leads us to an inescapable conclusion: if the fairing can’t be allowed to touch the water, the only option left is to catch it while it’s still in the air.

On this attempt to catch the fairing, SpaceX failed. But only just. Elon Musk reports that the fairing touched down in the ocean only “a few hundred meters” from the ship-mounted net. Not bad for a first attempt, and Elon believes that slowing the fairing down a bit more by way of a larger parachute should give them enough time to get the ship into position.

As luck would have it, the seas were calm and the parachutes got the fairing moving slow enough that it actually survived touchdown and was able to be recovered once the ship reached its location. The fairing is unlikely to be reused due to the issues outlined above, but it’s still a promising first step and will surely result in useful data for SpaceX to go over.

On August 19th, 1960 the US Air Force proved that mid-air recovery of an object returning from space was possible when a canister of film ejected from a Key Hole spy satellite was snatched by a C-119 “Flying Boxcar” as it descended under a parachute.

Due to the sensitive nature of the images being taken by these satellites, it was deemed that the best way to ensure the film was not intercepted before the US could reach it was to simply not let it land. The canister’s parachute slowed it down enough that pilots would be able to get a few tries at making the capture before it hit the water, but in the event that the film canister failed to be recovered by the aircraft they were designed to sink after 48 hours.

Catching a falling object from an airplane is an exceptionally difficult maneuver, and crews practiced constantly by catching dummy payloads that were dropped from planes flying above them. Being able to drop the film canisters directly onto a waiting Navy ship would have been much preferred, but in the early days of the Space Age that sort of reentry accuracy simply wasn’t possible. Indeed, occasionally they managed to get so spectacularly far off course that they would miss the ocean entirely; at least one film canister ended up landing in Venezuela.

Before anyone beats up on SpaceX for stumbling on a task that the US Air Force was able to accomplish with 1960’s technology, let’s not forget the high profile failure of NASA’s Genesis sample return mission in 2004.

The goal of Genesis was to capture solar wind particles and bring them back to Earth for study. Much like the fairing of the Falcon 9, the sample return capsule of the Genesis spacecraft was considered too fragile to land under parachutes.

Instead, the capsule was to be plucked out of the air by a helicopter flown by Hollywood stunt pilots. In an improvement over the 1960’s technology used for the Key Hole program, the Genesis capsule would be using a parafoil which allowed for controlled forward flight during the descent; the same type of parachute SpaceX is using to guide the Falcon 9 fairing towards their net.

Unfortunately, an incorrectly installed accelerometer meant the capsule’s electronics never deployed the parachutes. The capsule hit the ground at nearly 200 MPH in the Utah desert, though in the end scientists were able to recover enough material from the wreckage that all scientific goals of the mission were accomplished.

If recent history has taught us anything about SpaceX, it’s that you shouldn’t bet against them. While it won’t be the first time somebody has caught an object returning from space, when they finally manage to catch the fairing of the Falcon 9, SpaceX will surely be able to claim it’s the largest object to ever be recovered in such a manner. The inevitable social media blitz that will follow the first successful recovery should really be something.

Given SpaceX’s rapid launch rate and iterative approach to development, we likely won’t have to wait long to see the next attempt. Since the only net-equipped ship is on the West Coast, only launches from Vandenberg Air Force Base will be able to attempt a fairing recovery. A check of their advertised launch manifest for 2018 shows a number of upcoming launches from Vandenberg: the Iridium 5 launch currently scheduled for March 29th, followed by Iridium 6 sometime in April.

Nobody outside of SpaceX currently knows if fairing recovery will be attempted on these missions, but given the potential savings it seems unlikely they’ll be skipping any opportunities to try. The Falcon 9 fairing is estimated to cost $6M USD to produce, and due to its size and complex construction, has been identified as a bottleneck in an increasingly rapid launch cadence.

With nearly 30 more launches scheduled for 2018, and most of those requiring payload fairings, there’s plenty of incentive for SpaceX to make catching a school bus sized object as it falls from space seem as routine as landing a rocket on the deck of a barge.