Ask any electronics hobbyist or professional what the simplest building blocks of electronic circuits are, and they’ll undoubtedly say resistors, capacitors, and inductors. Ask a mechanically-inclined person the same question about their field and the answer will probably be less straightforward. Springs would make the list for sure, but then… hmm. Maybe gears? 80/20 aluminum extrusions?

As it turns out, there are a handful of fundamental building blocks in the mechanisms world, and they’re functionally very similar, and mathematically identical, to the Big Three found in electrical engineering.

Before we look at the components themselves, let’s step back a moment and think about voltage and current. Voltage is a potential difference between two points in a circuit, sometimes called electromotive force (EMF). It turns out that EMF is an apt term for it, because it is roughly analogous to, well, force. Voltage describes how “hard” electrons are being “pushed” in a circuit. In much the same vein, current describes the rate of electric charge flow.

Now that we’ve got that squared away, let’s break down what each of the three popular passives actually does, starting with the humble resistor. Resistors convert voltage to current — that is, the 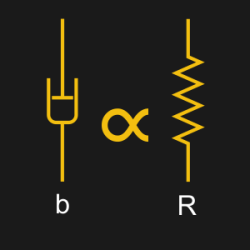 There’s a mechanical element that behaves in exactly the same way — the dashpot or damper. A dashpot is often a fluid-filled cylinder with a piston the liquid can flow past, and it pushes back harder the faster it is compressed. Your car suspension has a damper and a spring on each wheel — as you go over bumps, the springs let the car bounce a bit, and the dampers keep it from bouncing forever. The faster the car bounces, the harder the dampers push back. If you didn’t have dampers to dissipate the extra energy, much in the same way resistors dissipate energy in a circuit, you would be in for a rough ride.

Next up is the capacitor. Capacitors store and release energy — a voltage across a capacitor causes it to accumulate charge, which causes the current to drop until the device is fully charged, and the current 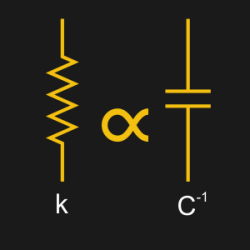 Again, let’s think about this mechanically. We have a device that stores energy and pushes back when force is applied, and then releases that energy when the force is removed: a spring! The speed at which a spring is compressed determines the rate at which it’s “push back” increases, until the “push back” is equal to the driving force — just like a charging capacitor. Your car’s shocks are a single-pole RC lowpass filter, but there’s one more element in the system to talk about.

Inductors are kind of the opposite of 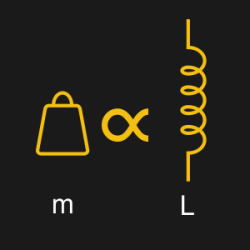 Differences aside, the two are quite similar, but inductors are bit more difficult to conceptually reconcile into a mechanical element. What device has an acceleration proportional to applied force? Everything! Everything with mass, that is. Good ‘ol

states that force is proportional to acceleration, so mechanically, an inductor can just be though of as, well, a brick.

It’s a cruel trick of fate that the physical spring, the analog of the capacitor, is drawn the same as the electrical resistor, the analog of the dashpot. Worse, the inductor looks more like a spring than either of them. Make sure you keep them straight.

Time For Some Differential Equations

Now that we have a conceptual understanding of how these elements are related, let’s take a deeper dive into the math behind the components to show that they really do behave identically. If you’re content with the mostly math-free discussion we’ve had so far, feel free to skip ahead to the example below. By convention, we’re going to think about velocity and acceleration as the first and second time derivative of position,

Looping back to the resistor-dashpot relationship, let’s look at the equations that govern each. The resistor obeys the all-too-familiar relationship:

While the dashpot, relating force and velocity, operates as:

Comparing these formulae, it becomes clear that the resistance

is analogous to the damping factor

Taking a glance at the equations that describe the “motion” of capacitors and springs, we can note a similar resemblance. For a capacitor:

And for a spring:

These equations sure do look similar, and much the same as before we can see that the capacitance

is “equivalent” to the reciprocal of the spring constant

. Those of you familiar with springs already may have raised an eyebrow at this one though, since it doesn’t follow the classic form

, but bear with me here. If we solve the differential equation and rearrange a tad, we can put it in a much more comfortable form:

Ah, that’s better, and now the equation even accounts for the initial displacement

One more to go! Here’s the differential equation that governs the behavior of an inductor:

And as you’ve come to expect, here’s a suspiciously-similar-looking equation for the motion of a mass:

Which is, of course, the old classic

. Much like before, we can see here that the inductance

has the same effect as the mass

Now that we’ve defined a bunch of equations, let’s stick them all together in an example! The old classic here is a cart connected to a wall by a spring and a dashpot.  We can even take that and model it as an electric circuit. Our example doesn’t show this, but its worth noting that springs in parallel and series behave just like capacitors in parallel and series, and the same goes for dashpots and resistors. Here are our two equivalent models of the system: 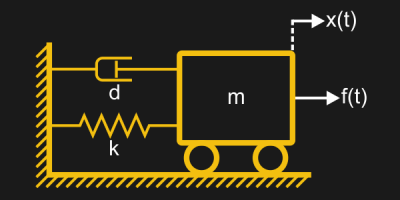 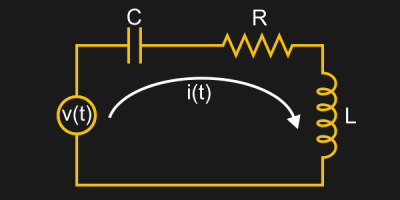 Time for some analysis. Much like the Kirchhoff Voltage Law says that the voltages in a closed loop must sum to zero, the forces in a closed system must also balance out. I’ll spare you all of the math, but the equations work out to:

Alright, these look a tad different, but remember when we talk about current, we’re really talking about the rate that charge

is passing by a point. If we rewrite the second equation with that in mind, it’s relationship to the first is much clearer:

Let’s bring all this math into reality. Are masses, springs, and dampers the building blocks of mechanical engineering? Well everything has mass, so I guess we’ve got that one covered. As for the other two, it really depends.

Personally, I often use springs in my designs, and I’ve yet to use a dashpot anywhere that isn’t a controls problem set from back when I was in school. There are also many different kinds of mechanical engineering. Structural engineers, for example, have a very different idea of what “building blocks” are than what thermal engineers do. Thermal engineers use the idea of “equivalent resistance” in an entirely different way, to describe heat transfer.

For dynamics problems, the mass, spring, and damper are unarguably the core components but there are a ton of other interesting mechanisms and devices out there that are ubiquitous in other subfields of mechanical engineering and design that we can explore in future articles. For now, at least we know how to analyze simple electric circuits by building a mechanical system.