Everyone needs to be able to communicate and express themselves, even people with blindness or low vision. Embossing paper with some kind of stylus is a popular, low-tech option, but there’s one big problem: pressing paper from the top leaves a dent, and so letters have to either be written backwards or else felt-read backwards. For this year’s Hackaday Prize, [Subir Bhaduri] is working on a fantastic tool that embosses positively, and from the top side of the paper. 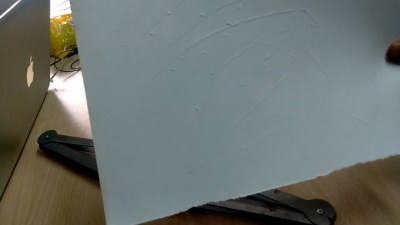 Here’s how it works: a pointed stylus pushes upward from the underside and meets up with a concave receiver on the top side through the paper. The two stylii move in concert thanks to the pantograph-inspired parallelogram setup, which we imagine would make it easier for someone with low vision to keep their bearings as they move around the page.

The video below shows prototype #2, which is the first one that worked. Well, it works, but [Subir] says it needs improvement, so prototype #3 is in the sketching stage now. [Subir] is planning to fix the paper in place somehow and also figure out how to keep the pantograph arms out of the user’s way.

Pantographs are used for all sorts of things, but the sweetest use we’ve seen was to carve messages into chocolate hearts.

4 thoughts on “Simple Tactile Drawing Pad Is Quite Impressive”