You’ve probably encountered this before — you have a circuit board that is poorly documented, and want to know the part number of a tiny SMD chip. Retro computer enthusiast [JohnK] recently tweeted about one such database that he recently found, entitled The Ultimate SMD Marking Codes Database. This data base is only a couple of years old judging from the Wayback Machine, but seems to be fairly exhaustive and can be found referenced in quite a few electronics forums.

Unlike their larger SMD siblings, these chips in question are so small that there is no room to print the entire part number on the device. Instead, the standard practice is for manufacturers use an abbreviated code of just a few characters. These codes are only unique to each part or package, and aren’t necessarily unique across an entire product line. And just because it is standard practice does not imply the marking codes themselves follow any standard whatsoever. This seemingly hodgepodge system works just fine for the development, procurement and manufacturing phases of a product’s lifecycle. It’s during the repair, refurbishment, or just hacking for fun phases where these codes can leave you scratching your head.

Several sites like the one [JohnK] found have been around for years, and adding yet another database to your toolbox is a good thing. But none of them will ever be exhaustive. There’s a good reason for that — maintaining such a database would be a herculean task. Just finding the part marking information for a known chip can be difficult. Some manufacturers put it clearly in the data sheet, and some refer you to other documentation which may or may not be readily available. And some manufacturers ask you to contact them for this information — presumably because it is dynamic changes from time to time. 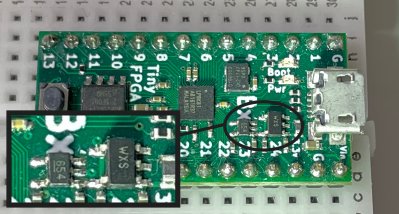 As a quick example of the pitfalls encountered when using these reverse lookups databases, consider two small-footprint SMD parts from a Tiny FPGA module that is sitting on my desk. Using the database that [JohnK] posted, the WXS is most likely a 3.2 V LDO by Richtek, part number RT9013-31GB. But WXS is also the code for a 3-pin PNP transistor. Richtek themselves says the RT9013 should be marked WX=, but that is based on a document from 2009. Richtek is one of the companies that says to contact them for the latest marking codes, so this may have changed in the past ten years.

The other chip marked 654 is more than likely a linear voltage regulator, such as the Micrel MIC5365-1.2YCV5. Here is a situation, presumably by coincidence, where several manufacturers are using the same code to represent different kinds of chips — interestingly all of them power supply circuits. Except for the Micrel part, the others all generate 5.4 VDC. For an FPGA board that probably uses 1.2 V, it’s reasonable to rule out those others. As you can see, knowing the package details and guessing the basic function of the chip can help narrow things down. Even though these lookups aren’t perfect, finding a match in the database and considering other things you know about the chip means you can usually find the information you want.

In the future, will we have a web-crawling AI who automatically generates and maintains such a database, even calling the manufacturers to obtains codes that aren’t published online? What is your favorite go-to site for looking up these codes? Let us know in the comments below. Thanks to [J. Peterson] for sending bringing this to our attention via the tips line.