Put a Little Plankton in Your Tank

When you fill the gas tank in your ICE or hybrid vehicle and start the engine, you’re closing a loop on chemical processes that started billions of years ago. The petrochemical fuel that powers most vehicles started as atmospheric carbon dioxide, greedily gobbled up by uncounted trillions of microscopic organisms like plankton, algae, and cyanobacteria via the process of photosynthesis, and locked into their biopolymers — lipids, carbohydrates, proteins, and nucleic acids.

These microorganisms multiplied fruitfully in the oceans and lakes of the primitive Earth, falling as sediment when they eventually died. The constant rain of death built thick layers of sediment, rich in organic molecules. Most of the carbon in these sediments decomposed via oxidation reactions, but in some areas, vast layers of the rich organic slime ended up covered by inorganic sediments thanks to geological processes. Locked away from the corrosive effects of oxygen and experiencing increasing heat and pressure thanks to the weight of the material on top of them, these partially decomposed sediments gradually transformed into kerogen, a deposit of organic material locked inside a sedimentary rock.

While kerogens are rich in large, complex hydrocarbons, and some are even rich enough to be used as fuel — coal is essentially a kerogen whose starting biomass was largely land-based plants — most kerogens don’t fully convert into petroleum. Kerogens like the shale oil fields in North America are said to be “thermally immature” — basically, they haven’t cooked enough. But other kerogens, ones that have deeper layers of sediment deposited on top of them, go through further geochemical reactions, breaking their complex hydrocarbons down into simpler and simpler compounds as time goes by, eventually forming vast pockets of liquid crude oil.

The most thermally mature products, the ones that have cooked the longest, are the short-chain gaseous hydrocarbons from the single-carbon methane to the four-carbon butane. On the other end of the thermal maturity spectrum, long-chain hydrocarbons, with perhaps 40 carbons or more in their chains, make up the thick, sticky asphalt compounds.

The hydrocarbons that are important in terms of motor fuels and lubricants tend to come from the middle of the thermal maturity range. Diesel, kerosene, and jet fuels tend to come from the C9 to C16 range, with longer carbon chains making up the heavy bunker oil used to fuel marine engines. On the shorter end, the C5 to C8 range hydrocarbons make up the bulk of gasoline, which is a complex blend of many different hydrocarbons, including straight-chain alkanes like hexane and octane, cycloalkanes, and any number of additives like ethers and alcohols, including ethanol.

It’s important to note that any crude oil deposit is going to contain a mix of hydrocarbons. Some will be richer in hydrocarbon chains of one length than another, but in general, each deposit is going to have at least some of every fraction, from methane to bitumen. What’s in there depends on the conditions the kerogen that formed the crude oil experienced, and how hydrocarbons from different sources mixed underground over time. 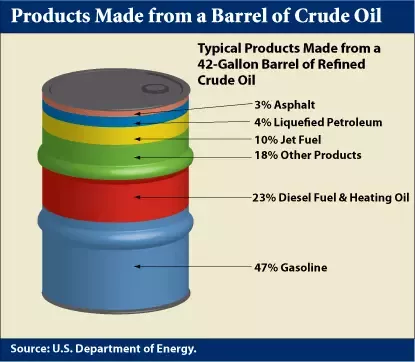 And that leads to the essential problem of petroleum extraction. While fuels like diesel and gasoline are highly engineered chemicals, they are not created from crude oil. Rather, they are refined from it. That might seem self-obvious, but it’s an important point. A typical barrel of crude oil contains about 40-50% gasoline (or more precisely, the C5 to C8 fractions that are blended into gasoline), and fully 84% of each barrel contains fuel-grade fractions, when you throw in diesel, kerosene, and bunker oil.

This is the root of the gasoline problem. Right now, electric vehicles make up a tiny fraction of the total fleet — perhaps 3% worldwide. But at some point, through a combination of better engineering, political pressure, improved battery technology, and climate awareness, demand for electric vehicles is going to take off in a serious way. Some estimates peg the percentage of EVs on the road in 2040 at 58%, at least for passenger vehicles. That’s a huge number of vehicles that won’t be stopping by the local gas station to fill up every couple of days, meaning demand for gasoline will necessarily plummet.

But, as we’ve seen, about half of every barrel of crude oil is gasoline. If we suddenly don’t need as much gasoline, the only way we can deal with the decreased demand is to not refine it from crude oil in the first place. That poses a problem if we still need any of the other fractions, which we likely will. Take diesel as an example. A 2019 report estimates that the medium and heavy truck fleet will only be about 4% electric by 2025, and that most of that will be trucks working local and regional delivery routes, mainly because of limitations in battery life. Long-haul trucks, though, will probably not be electrified for quite a while, meaning that crude oil will still have to be distilled to produce diesel to run them.

The same problem applies to airplanes — unless battery technology improves drastically, we’ll still need to get to the kerosene that’s in crude oil. Add in the asphalt needed for road building, the heavy bunker fuel needed to keep cargo ships running, the lubricants needed to run pretty much anything mechanical, and the petroleum distillates that go into fertilizers, pharmaceuticals, and plastics, and you’ve got a situation where everything in a barrel of oil is both useful and needed — except for gasoline, which happens to be the bulk of what’s in there.

And so that’s the problem: roughly half of every barrel of crude oil that we pump out of the ground is made of something that’s destined to be useless, at least in a world dominated by electric vehicles. And that wouldn’t be so bad if the other 50% of each barrel didn’t contain stuff that’s so darn useful; otherwise, we could just leave the oil in the ground and call the problem solved. That may be the eventual solution, once everything that currently burns fuel is converted to some other power source, but in the meantime, we’ll either have to figure out what to do with the waste gasoline, or find a way to get the hydrocarbons we need some other way.

Stick around for part two of this series, where we’ll dig into synthetic fuels, synthetic oils, and how perhaps we can engineer our way around the gasoline problem.

115 thoughts on “Electric Vehicles, The Gasoline Problem, And Synthetic Fuels”