You never know what kind of wonders you’ll find on eBay, especially when you have a bunch of alerts configured to go off when weird electronic devices pop up. You may even find yourself bidding on something despite not being entirely sure what it is. Perhaps you’re a collector of unusual gadgets, or maybe it’s because you’ve committed to doing monthly teardowns for the hacker blog you work for. In any event, you sometimes find yourself in possession of an oddball device that requires closer inspection.

Case in point, this “Magnetic Wave Tester” from everyone’s favorite purveyor of high-end electronics, Nihon Kenko Zoushin Kenkyukai Corporation. The eBay listing said the device came from an estate sale and the seller didn’t know much about it, but with just a visual inspection we can make some educated guesses. When a strong enough magnetic field is present, the top section on the device will presumably blink or light up. As it has no obvious method of sensitivity adjustment or even a display to show specific values, it appears the unit must operate like an electromagnetic canary in a coal mine: if it goes off, assume the worst.

If you’re wondering what the possible use for such a gadget is, you’re not the only one. I wasn’t able to find much information about this device online, but the few mentions I found didn’t exactly fill me with confidence. It seems two groups of people are interested in this type of “Magnetic Wave Tester”: people who believe strong magnetic fields have some homeopathic properties, or those who think it will allow them to converse with ghosts. In both cases, these aren’t the kind of users who want to see a microtesla readout; they want a bright blinking light to show their friends.

So without further ado, let’s align our chakras, consult with the spirits, and see what your money gets you when you purchase a pocket-sized hokum detector. 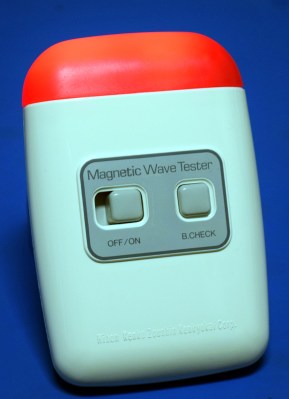 I’ll say this much, the thing feels absolutely fantastic. The enclosure is thick and substantial, and the buttons have a very satisfying response. It even has a nice heft to it with the 9 V battery installed. Aesthetically it reminds me of a ladies shaver from the 1980’s, but if the goal was to make it look non-threatening and vaguely medical, I suppose they hit the target. The red LED diffuser at the top is particularly nice, though I was somewhat disappointed to find the device didn’t make any frantic beeping sounds when triggered.

Overall, it reminds me of the Scientology “E-Meter” we saw taken apart last year. These devices are designed to impress the user, to make them think they’re operating a high-tech instrument. It’s all part of the experience, and I would love to know what the original retail price would have been for this particular gadget.

Of course, beauty is only skin deep. The real question is, does it work? To that end, I have to say the performance is about what I expected. I was only able to get it to fire off twice: when sitting on top of the microwave, and when a few inches away from a fan. As theorized, this gadget only indicates the presence of a relatively high levels of electromagnetic radiation.

To that end, one could say that the concept is not entirely unlike the old Civil Defense survey meters. The sensitivity was so low on those meters that any motion of the needle effectively meant the area was unsafe for human occupancy. The idea was that in the event of a nuclear weapon being detonated, all the user really needed was a way to see if it was safe to come out of their shelter. In the same way, the “Magnetic Wave Tester” seems to only respond to EMF that’s high enough to be a concern. In other words, if you saw this thing lighting up when you waved it over your bed, you should probably stay at a hotel.

So it looks nice and even lights up if you try to put it in the microwave, but what we really want to see is how it works. With the battery door removed, there’s just a single screw that stands between us and the wonders within.

Just to get it right out of the way, yes, that is a reed switch on the back of the PCB. Further, placing a magnet behind the meter does cause it to light up. That being said, the reed switch is clearly not the primary sensor in this device and must exist as some secondary function. Honestly, the only thing I can think of is that they wanted to make sure that any user who “tested” the device by holding it up to a magnet wouldn’t be disappointed that it didn’t go off.

Not that the primary functionality is much more advanced. From a cursory look at the board, it appeared that the coil in the center was being used as a sensor. A nearby magnetic field would induce a slight voltage in the coil, and once it hits a certain threshold the LEDs come on and alert the user. Testing the theory is simple enough: with the oscilloscope put across the coil and the volts per division turned down low, a sine wave was observed when the device was moved close to an AC fan in operation.

It’s not a terribly accurate method of measuring an electromagnetic field, but of course that was never the goal. If all you want your gadget to do is light up when something nearby is pumping out a decent amount of electromagnetic energy, this is a cheap and easy way of doing it.

Many of the people reading this teardown probably guessed early on that the internals of the “Magnetic Wave Tester” would leave something to be desired. With the operator presumably uninterested in nuances such as field intensity, there’s no advantage to making a device capable of quantifying what it’s detecting. A magnetic field detector which returns a Boolean response must rank up there with divining rods and gemstones in terms of scientific application.

Still, if we don’t test these assumptions and simply take our preconceived notions as truth, we’d be in the same boat as the folks for which this gadget was designed. We can now rest easy with the knowledge that our theories were validated, which is perhaps more than could be said for anyone who hoped this blinking toy would allow them to contact the spirit realm.