Well, that certainly didn’t take long. It’s been just about a month since the Raspberry Pi Zero 2 hit the market, and we’re already seeing folks revisit old projects to reap the benefits of the drop-in upgrade that provides five times the computational power in the same form factor.

Take for example the PiGlass v2 that [Matt] has been working on. He originally put the Pi Zero wearable together back in 2018, and while it featured plenty of bells and whistles like a VuFine+ display, 5 MP camera, and bone conduction audio, the rather anemic hardware of the original Zero kept it from reaching its true potential. 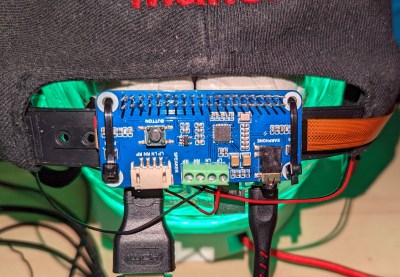 But thanks to the newly released Pi Zero 2, slapping quad-core power onto the existing rig was as easy as unplugging a couple cables and swapping out the board. With the increased performance of the new Pi, he’s able to play multimedia content through Kodi, emulate classic games with RetroPie, and even stream live video to YouTube. Using the custom menu seen in the video below, a small off-the-shelf Bluetooth controller from 8BitDo is all he needs to control the wearable’s various functions without getting bogged down with a full keyboard and mouse.

Although it might not have the punch of its larger siblings, the new Pi Zero 2 is definitely a very exciting platform. The highly efficient board delivers performance on par with the old Pi 3, while still being well positioned for battery powered projects like this one. We’re eager to see what develops as the new SBC finds its way into the hands of more hackers and makers in the coming months.