There’s an unknown piece of military electronic gear being investigated over on [Usagi Electric]’s YouTube channel (see video below the break). The few markings and labels on the box aren’t terribly helpful, but along with the construction and parts, seem to identify it as relating to the US Navy from the WWII era. Its central feature is a seeing-eye tube and an adjustment knob. [David] does a bit of reverse engineering on the circuit, and is able to fire it up and get it working, magic eye squinting and all.

But there’s still the unanswered question, what was this thing supposed to do? Besides power, it only has one input signal. There are no outputs, except the “data” presented visually by the magic eye tube. Commenters have suggested it was used with sonar equipment, calibration tool, RTTY tuning aid, light exposure meter, etc. But if you dust off your copy of Navships 900,017 “Radar Systems Fundamentals” from 1944 and turn to page 249, there’s a section entitled Tuning Indicator that describes this circuit, almost. 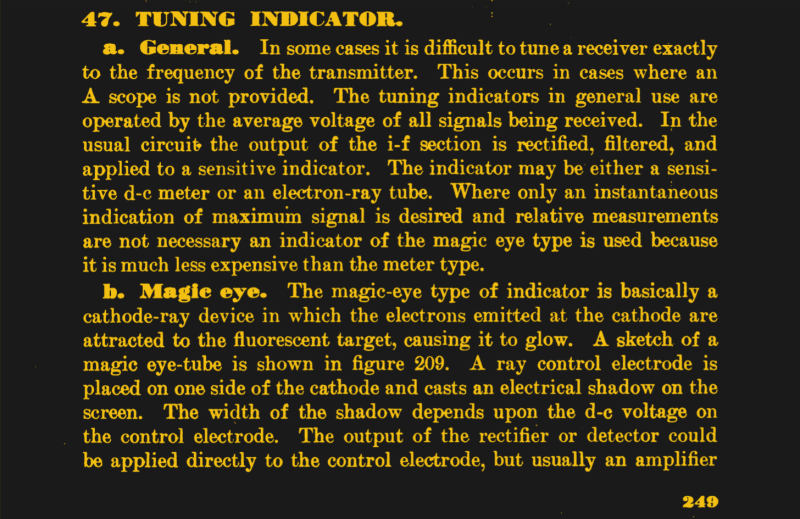 This suggests these magic eyes were simply being used as a sensitive voltmeter since they were much less expensive than a mechanical meter. Even if this is the function of the box, there is still the mystery of what it was tuning. Share your thoughts on this in the comments below, especially if you have seen one in the wild.