[Kevin Lynagh] is interested in tiny PCB stepper motors, and after reviewing the various projects and patents to-date, decided to give it a try himself. These are basically a stepper motor that’s been unrolled and made flat — traces on the PCB act as the coils and tiny magnetic “robots” act as the rotor. 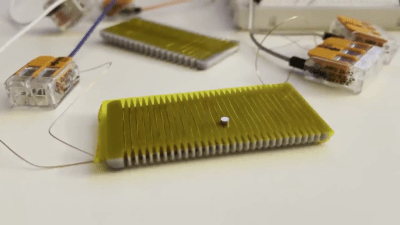 If you want to try this concept yourself, [Kevin]’s post contains an excellent survey of prior art and projects, as well as exploring the theory behind how these things work. He has taken a deep dive in to the theory, deep enough to grasp what’s going on and to build some preliminary prototypes with a bit of confidence. First off was just a hand-wound flat coil as a proof-of-concept. Next was a PCB version that worked almost exactly as planned, although he confesses to burning out a motor driver circuit before stepping back and making some calculations.

We covered one such project back in 2014 and wrote about a Hackaday.io magnetic robot project from reader [bobricius] in 2018. Have you ever used this technology for anything besides a demonstration? Let us know in the comments below.

Thanks to [Adrian] for sending us the tip.