The classic iPod was the MP3 player to beat back in the day, loaded with storage and with its characteristic click-wheel interface. [Ellie] had an iPod Video laying around, one of the more capable models that came out near the end of the product’s run, and set out upgrading it for duty in the pandemic-wracked badlands of 2022. 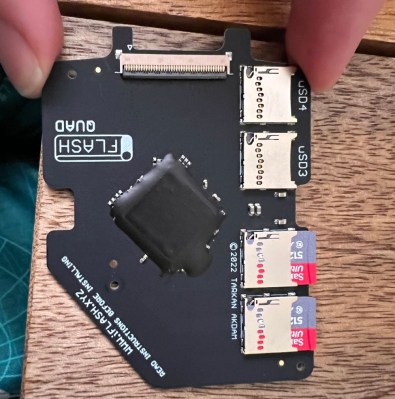 The iPod in question was a 5.5th generation model, prized for being the last to feature the Wolfson DAC with its good audio quality. [Ellie] used the ever-helpful iFixit guide to learn how to disassemble the device safely. Careful hands and a spudger are key to avoid marring the pressed-together metal case.

Once opened, an iFlash Quad board was installed inside that lets the iPod use up to four micro SD cards for storage instead of the original hard disk drive. With two 512 GB cards installed, [Ellie] won’t be short of storage. A new battery was then subbed in, along with a fancy clear front casing for the aesthetic charm of it all.

After the hardware modifications were complete, the iPod needed to be restored with iTunes to start working again. She then installed the open source Rockbox firmware, which opens up the capabilities of the hardware immensely. Perhaps best of all, it can play DOOM! Alternatively, you can use the clickwheel to control the volume on your MacBook if you so desire.

[Ellie’s] project goes to show that modifying an iPod these days can be a fun weekend build thanks to the great software and hardware now available. It’s wonderful to see that the platform still has such great support years after it has been discontinued. If you really want to look back though, take a gander at the early prototype of Apple’s breakout MP3 player.

23 thoughts on “Classic IPods Are Super Upgradeable In 2022”