The US Senate has approved the “Sunshine Protection Act”, a bill to make Daylight Saving time the default time and do away with the annual time changes. While I can get behind the latter half of this motion, redefining Daylight Saving time as Standard time is, in my opinion, nonsense.

It’s particularly funny timing, coming right around the Vernal Equinox, when the sun stands at its highest right at Noon Standard Time, to be debating calling this time “one PM” forevermore.

Let’s do a quick overview of the good idea here — doing away with time changes. These are known to cause sleep disturbances and this leads not just to sleepy heads on Monday morning, but to an increased risk of heart attack and accidents in general. When researchers look into the data, it’s the “springing forward” that causes trouble. People who’ve slept one extra hour don’t seem to suffer as much as people who’ve lost one. Go figure.

So maybe it makes sense to stop changing times. If we’re going to settle on one standard time, do we pick Standard time or Daylight Saving time? Admittedly, this is a totally unfair way to pose the question, but there are a number of good reasons to prefer all-year Standard time. The biggest one is winter. Basically, it’s already tough enough to get up on a cold January morning when the sun is not due to rise for another hour or two. Add another hour of darkness on top, and you know why the two previous attempts to run all-year Daylight Saving were short-lived. And why the Swedes drink so much coffee.

There’s also the fundamental logic behind our measurement of time that’s stood for centuries, and is embedded in most of our cultural references to time. Ante Meridian and Post Meridian. High Noon, when the hour hand on the clock points straight up, represents the sun itself. But even before clocks, the sun’s halfway point along its daily journey marked the halfway point of the day. That’s not only why we eat lunch when we do, it’s the origin of man’s time-telling itself.

If we change the definition of noon permanently, we’ve decoupled time from the sun. How will we explain time to future children? I’ll accept Daylight Saving time when we start reprinting analog watches with 1 o’clock at the top and start referring to 12 AM as the one that’s just before the sun reaches its peak. As soon as “one noon” replaces “twelve noon”, I’ll get on board. Midnight, when the clock strikes one, just doesn’t send the same shiver down my spine. Sorry, Dracula.

If culture and physics point to Standard Time, why would you want Daylight Saving to be the new normal? When people think of Daylight Saving, they naturally think of those nice long summer days that stretch out into the night. My personal bet is that many folks are confounding summertime with Summer Time. Heck, even the name of the bill proposes to protect sunshine itself, rather than just move the hands of the clock around. These are not good reasons.

The good reason behind the Daylight Saving time proposal — indeed, the original reason — is to save energy. And this probably made intuitive sense in the 1950s, when a significant amount of energy was spent on lighting. But nowadays, when non-sleeping people are running the air conditioning even if their lights are still off, it’s not so clear. For the longest time, there were no empirical economic studies of Daylight Saving, until 2008, when there were, and when the situation remained not entirely clear.

In 2007, the Energy Policy Act of 2005 came into effect, and America’s Daylight Saving time was extended by a couple weeks on one side, and a couple days on the other. And while it was a mild inconvenience for normal folks to remember the new dates, this sort of change in a system is an economist’s dream. In a field where running country-scale experiments is forbidden, these sort of external changes offer the next best opportunity to figure out how things work. Something changed in the system, what are the results?

The US Department of Energy (DOE) put out a report to Congress in 2008 (PDF) analyzing the national effect of the change. They note a savings at night that slightly outweighs an increase in energy demand in the mornings, in summer. They also note that there are increased savings in March compared to November. Their conclusion was that there was a 0.5% daily energy savings attributable to Daylight Saving. All in all, the new policy saved the US 0.03% of annual energy demand. Not exactly overwhelming, but not nothing. 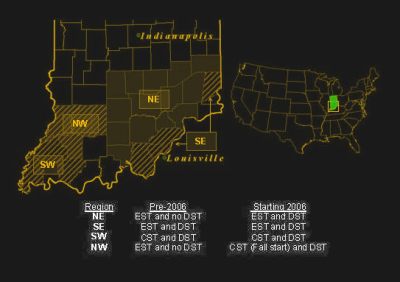 Another empirical economic study of Daylight Saving time came out in 2008. This paper was based on household-level evidence from Indiana, which had the peculiarity that Daylight Saving was implemented on a per-county basis both before and after the 2007 national change. Some counties switched to DST, some switched from DST, and some didn’t switch at all. This let the researchers do a much more direct comparison of “treatment” and “control” groups across counties; they chose Indiana because it was the perfect natural experiment. Their fine-grained dataset also allowed them to break down the overall energy consumption into a few categories. They found a 1% daily increase in energy use. As you’d expect electricity for lighting dropped, but was more than compensated for by heating and cooling.

Both of these studies agree that Daylight Saving time actually increases energy consumption starting some time in the early fall. And while neither of these studies were aimed at answering the right question — if we extended DST through the winter, what would happen? — they both suggest that it would be the opposite of saving. Making Daylight Saving time permanent won’t save energy. And depending on which of the two studies you believe, getting rid of it entirely might.

So if you asked Aristotle, he’d side with me. Noon is when the sun is at its highest, and the planets orbit in perfect circles. (OK, scratch that.) If medicine points toward running only one time standard, then astronomy as well as linguistic, horological, and cultural tradition all point toward Standard time as the right choice. The economic effects are probably not all that significant one way or the other, and will probably depend on future relative efficiency gains in lighting versus air conditioning. (Good luck predicting that.) All I know is that Daylight Saving messes up my sundial right now.

But how am I going to sell undoing Daylight Saving time to people who think they’re literally “Saving Daylight” or “Protecting Sunshine”? To people who’ve heard that DST saves energy their whole life, whether it’s demonstrably true or not? To people who confuse longer days in the summer with lies about the funny numbers on a clock? Fool’s errand.