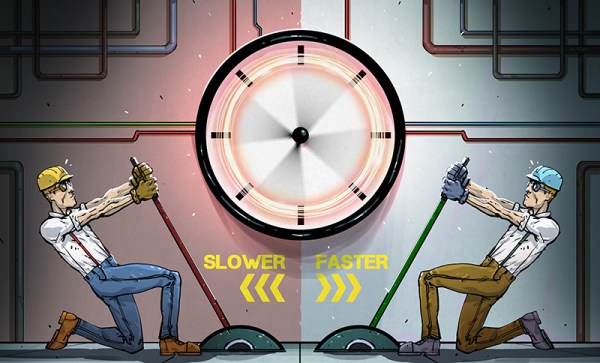 The US Senate has approved the “Sunshine Protection Act”, a bill to make Daylight Saving time the default time and do away with the annual time changes. While I can get behind the latter half of this motion, redefining Daylight Saving time as Standard time is, in my opinion, nonsense.

It’s particularly funny timing, coming right around the Vernal Equinox, when the sun stands at its highest right at Noon Standard Time, to be debating calling this time “one PM” forevermore.

Let’s do a quick overview of the good idea here — doing away with time changes. These are known to cause sleep disturbances and this leads not just to sleepy heads on Monday morning, but to an increased risk of heart attack and accidents in general. When researchers look into the data, it’s the “springing forward” that causes trouble. People who’ve slept one extra hour don’t seem to suffer as much as people who’ve lost one. Go figure.

So maybe it makes sense to stop changing times. If we’re going to settle on one standard time, do we pick Standard time or Daylight Saving time? Admittedly, this is a totally unfair way to pose the question, but there are a number of good reasons to prefer all-year Standard time. The biggest one is winter. Basically, it’s already tough enough to get up on a cold January morning when the sun is not due to rise for another hour or two. Add another hour of darkness on top, and you know why the two previous attempts to run all-year Daylight Saving were short-lived. And why the Swedes drink so much coffee.

There’s also the fundamental logic behind our measurement of time that’s stood for centuries, and is embedded in most of our cultural references to time. Ante Meridian and Post Meridian. High Noon, when the hour hand on the clock points straight up, represents the sun itself. But even before clocks, the sun’s halfway point along its daily journey marked the halfway point of the day. That’s not only why we eat lunch when we do, it’s the origin of man’s time-telling itself.

If we change the definition of noon permanently, we’ve decoupled time from the sun. How will we explain time to future children? I’ll accept Daylight Saving time when we start reprinting analog watches with 1 o’clock at the top and start referring to 12 AM as the one that’s just before the sun reaches its peak. As soon as “one noon” replaces “twelve noon”, I’ll get on board. Midnight, when the clock strikes one, just doesn’t send the same shiver down my spine. Sorry, Dracula.

If culture and physics point to Standard Time, why would you want Daylight Saving to be the new normal? When people think of Daylight Saving, they naturally think of those nice long summer days that stretch out into the night. My personal bet is that many folks are confounding summertime with Summer Time. Heck, even the name of the bill proposes to protect sunshine itself, rather than just move the hands of the clock around. These are not good reasons.

END_OF_DOCUMENT_TOKEN_TO_BE_REPLACED 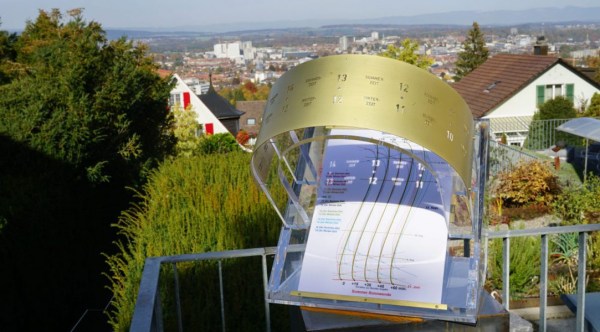 We’re always a fan of an interesting or unique clock build around here, which often use intricate pieces of technology to keep time such as weights and gears, crystal oscillators, or even a global network of satellites in the case of GPS. While these are all interesting methods of timekeeping, the original method of tracking the sun is often forgotten. With this clock, the sun is the main method of keeping track of time, but unlike traditional sundials it has a number of advancements that let it keep surprisingly accurate time. (Google Translate from German)

While most sundials can only show hours, this one from [leon andré], a retired physicist, has a method for displaying minutes as well. It uses pinholes instead of shadows to keep track of the position of the sun, with the pinhole casting a bright spot of sunlight onto a diagram below. The diagram keeps track of the minutes, and consists of curved lines which help account for the sun’s changing path throughout a typical year. The dial keeps track of local solar time, as any sundial would, but by rotating it along its vertical axis it can be calibrated for the timezone that it’s in regardless of its position.

As far as clock builds go, one that is completely passive like this semi-digital sundial is fairly unique, especially for its accuracy. And, when set to local solar time, it will be the most reliable method of keeping time long-term than possibly any other clock we’ve seen before, as long as it’s not too cloudy outside. On the other hand, it is possible to augment a sundial with some modern technology as well.

Sundials, one of humanity’s oldest ways of telling time, are typically permanent installations. The very good reason for this is that telling time by the sun with any degree of accuracy requires two-dimensional calibration — once for cardinal direction, and the other for local latitude.

[poblocki1982] is an amateur astronomer and semi-professional sundial enthusiast who took the time to make a self-calibrating equatorial ‘dial that can be used anywhere the sun shines. All this solar beauty needs is a level surface and a few seconds to find its bearings.

Switch it on, set it down, and the sundial spins around on a continuous-rotation servo until the HMC5883L compass module finds the north-south orientation. Then the GPS module determines the latitude, and a 180° servo pans the plate until it finds the ideal position. Everything is controlled with an Arduino Nano and runs on a 9V battery, although we’d love to see it run on solar power someday. Or would that be flying too close to the sun? Check out how fast this thing calibrates itself in the short demo after the break.

Not quite portable enough for you? Here’s a reverse sundial you wear on your wrist. 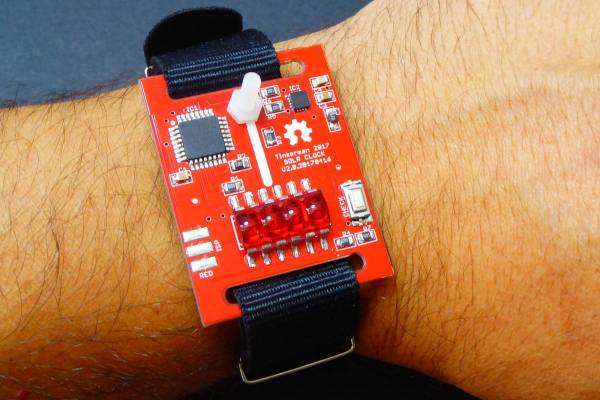 [Xose Pérez] set out to make a sundial wristwatch by combining a magnetometer a small nylon bolt for the gnomon, but it doesn’t work like you’d think. Instead of using the magnetometer to point the sundial north, you angle the watch until the bolt’s shadow matches the white line on the PCB, and the ATmega328P computes the azimuth of the sun and determines the time thereby. To display the time he used one of those QDSP-6064 bubble displays, because sundials are retro.

His description of the project build includes a lot of fun anecdotes, like him attempting to solder the LCC connections of the HMC5883 magnetometer before giving up and making use of Seeedstudio’s PCBA service. He got 10 boards back with the ATmega and magnetometer populated while leaving the rest for [Xose] to fill in.

One fun detail of the project? You can’t tell what time it is without the sun, but you can’t read the bubble display in bright sunlight.

If you’re looking for more watch projects we’ve published, check out this wrist-controlled watch, the Chronio DIY watch, and this cool nixie-tube watch.

You don’t get much more old school than a sundial, and more new school than 3D printing. So, it is nice to see these two combined in this impressive project: the 3D printed digital sundial. We have seen a few sundial projects before, ranging from LED variants to 3D printed ones, but this one from [Julldozer] takes it to a new level.

In the video, he carefully explains how he designed the sundial. Rather than simply create it as a static 3D model, he used OpenSCAD to build it algorithmically, using the program to create the matrix for each of the numbers he wanted the sundial to show, then to combine these at the appropriate angle into a single, 3D printable model. He has open-sourced the project, releasing the OpenSCAD script for anyone who wants to tinker or build their own. It is an extremely impressive project, and there is more to come: this is the first in a new podcast series called Mojoptix from [Julldozer] that will cover similar projects. We will definitely be keeping an eye on this series.

END_OF_DOCUMENT_TOKEN_TO_BE_REPLACED 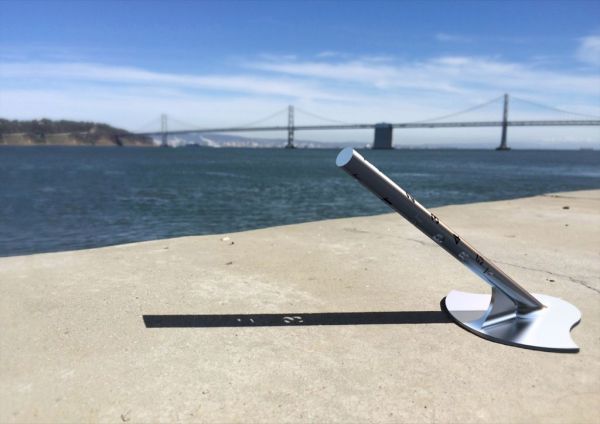 It seems that the longer a technology has been around, the more likely it is that all of the ideas and uses for that technology will be fleshed out. For something that’s been around for around 5500 years it must be especially rare to teach an old dog new tricks, but [Sebastian] has built a sundial that’s different from any we’ve ever seen.

Once done with all of the math for the sundial to compute its angles and true north based on his latitude and longitude, [Sebastian] used Autodesk Inventor to create a model. From there it was 3D printed, but the interesting part here is that the 3D printer allowed for him to leave recesses for numbers in the sundial. The numbers are arranged at such angles inside the sundial so that when it’s a particular hour, the number of the hour shines through the shadow of the sundial which creates a very unique effect. This would be pretty difficult to do with any machine tools but is easily accomplished via 3D printing.

[Sebastian] wanted a way to appreciate the beauty of time, and he’s certainly accomplished that with this new take on  the sundial! He also wonders what it would be like if there was a giant one in a park. This may also be the first actual sundial build we’ve featured. What does that mean? Check out this non-pv, sun-powered clock that isn’t a sundial.

Thanks to [Todd] for the tip! 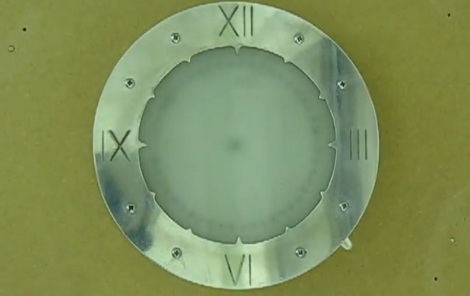 Hack A Day’s own [Jack Buffington] finally finished the solar clock he built for the buildlounge.com laser cutter giveaway.

[Jack] has been putting up the build log on his blog, and now the project is finally complete. The clock operates entirely on solar power. Instead of fancy-smanchy electronics, this clock puts a new spin on the very old school sundial. A box outside [Jack]’s house captures sunlight and focuses it onto an array of optical fibers. These fibers transmit the sunlight though the wall and to the face of the clock. Only a portion of the fibers are lit at any one time, and these correspond to the time of day. With a lot of confusing fiber routing, the clock can indicate the time of day by lighting up the clock face.

We covered the nascent beginnings of this project when it was still a glimmer in [Jack]’s eye, and we’ve got to hand it to him. This is a really creative project, and the addition of the ‘daylight savings time lever’ is the icing on the cake. Check out the video after the break for a great explanation of how the clock actually works, and be sure to check out the project on BuildLounge.