A funny thing happened on the way to the delta. The one on Jezero crater on Mars, that is, as the Perseverance rover may have captured a glimpse of the parachute that helped deliver it to the Red Planet a little over a year ago. Getting the rover safely onto the Martian surface was an incredibly complex undertaking, made all the more impressive by the fact that it was completely autonomous. The parachute, which slowed the descent vehicle holding the rover, was jettisoned well before the “Sky Crane” deployed to lower the rover to the surface. The parachute wafted to the surface a bit over a kilometer from the landing zone. NASA hasn’t confirmed that what’s seen in the raw images is the chute; in fact, they haven’t even acknowledged the big white thing that’s obviously not a rock in the picture at all. Perhaps they’re reserving final judgment until they get an overflight by the Ingenuity helicopter, which is currently landed not too far from where the descent stage crashed. We’d love to see pictures of that wreckage.

We recently had a Hack Chat on 3D printing metal where Agustin Cruz came on to talk about his attempt to build an affordable electron beam sintering printer. The chat was great, and now Agustin has made a bunch of progress that’s worth a look. The idea behind electron beam sintering is simple — it’s basically a souped-up version of the electron gun and deflection coils in the back of a CRT, which blasts away at a bed of fine metal powder to sinter it together, layer by layer. The details, though, like working in a vacuum, precisely depositing a fresh layer of powder, and precisely controlling beam power and position, are non-trivial. Check out Agustin’s progress on his Hackaday.io project.

Do you think of yourself as a boring person? Chances are you don’t — it seems like being a bore is like having bad breath, in that it’s hard to tell if you’ve got it. But according to a new study, boring people are not only quantifiable, but the stereotypes about them are all pretty much true — or at least consistent. The methodology seems a little subjective, though — participants were asked to provide a brief description of a boring person, which hilariously included former US Vice President Al Gore for his “really monotone speech” and “no emotion.” They then imagined personality characteristics, hobbies, and occupations for these stereotypical bores, coming up with things like long-winded stories, geocaching, and accounting. Feeling personally attacked by this point, we read no further, but the take-home message seems to be that while everyone is boring to someone, you really have to work at it to be boring to everyone.

If you listen to the Hackaday Podcast, which of course immediately disqualifies you from the boring people cohort, you’ll know about the “What’s That Sound?” segment, where a short clip of some tech-relevant sound is played, and if you can identify it, riches and fame await. Well, if you can’t get enough of that stuff, head over to the Museum of Endangered Sounds, which seeks to preserve our auditory heritage before it slips away. The site has a mere smattering of sounds so far, including the AIM message alert, the old Nokia ringtone, Windows 95 startup, a floppy drive seeking tracks, and the sound of a cartridge being inserted into a Nintendo NES, complete with the obligatory blowing on the connector. We can think of literally thousands of more sounds worth preserving, and while we don’t see a way to contribute sounds, it might be worth pinging the proprietor if you can think of anything.

And finally, I share with you the following photo, sent by my son, currently studying at the University of Idaho, snapped moments before his attempted abduction: 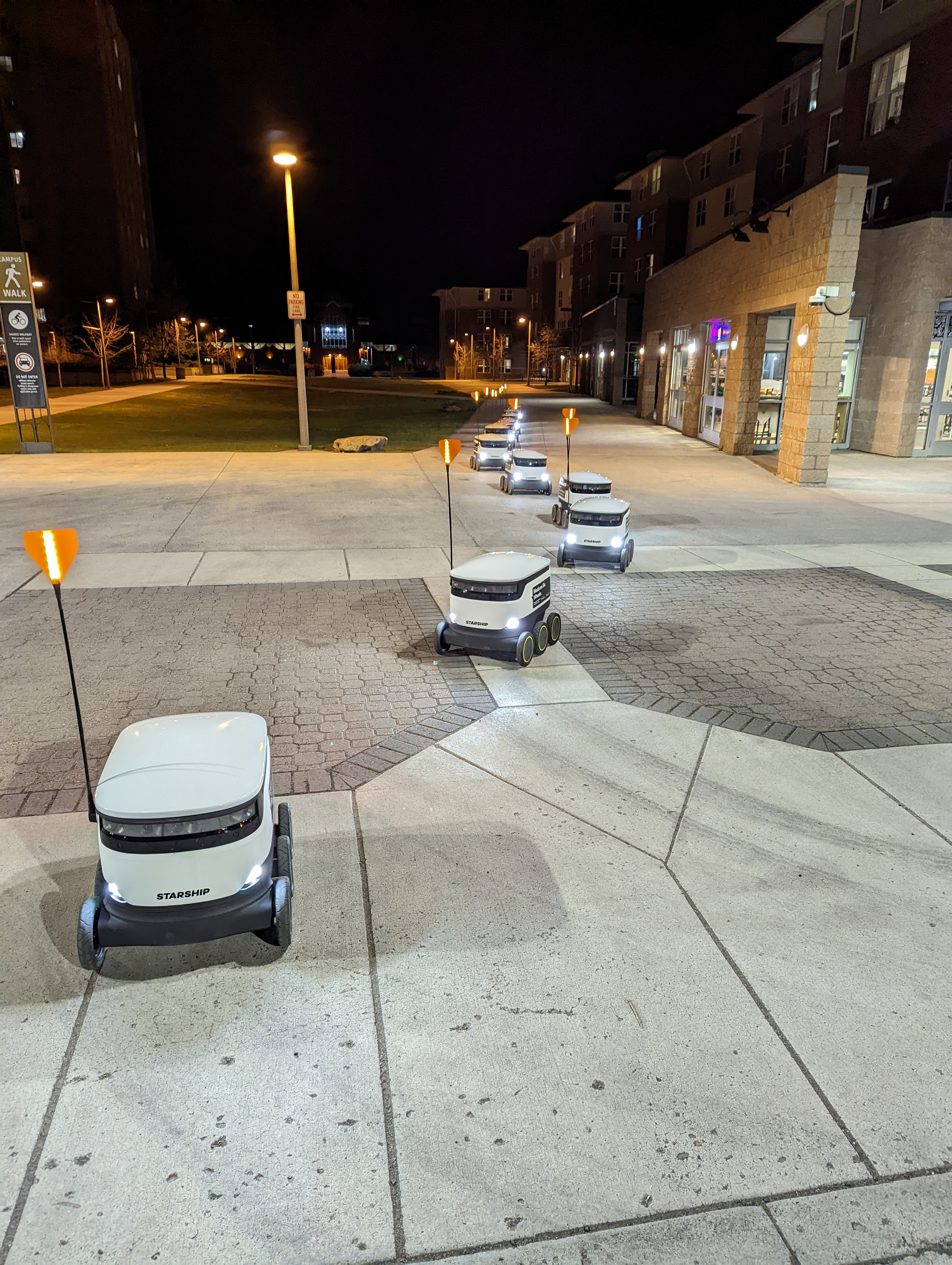 Thankfully, he managed to sidestep the slow-moving swarm and make good his escape. I count thirteen of these Starship delivery bots in the picture, doing who the hell knows what. Are they heading back to base for the night? Off to an all-hands meeting? Or perhaps they’re on strike and working the picket line? Hard to say, but it’s interesting behavior for these things.