There are some projects which once might have been entirely appropriate, but which now seem sacrilegious. [Dave Luna]’s PC docking station in a Commodore Pet 64 case might at first sight seem to be one of them, but there’s a little more to it than gutting a cherished retrocomputer. 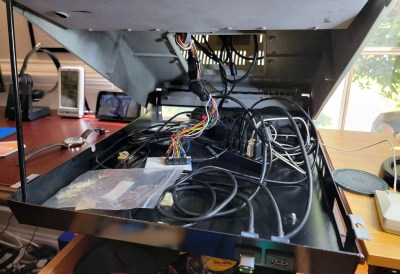 A much younger [Dave] had a dead Pet 64, and because over two decades ago such a thing was considered junk, set about converting it to a PC case. In the way of all ambitious projects it stalled, so here in 2022 he was starting with the metal case and keyboard of a Pet 64 rather than the full computer.

Into the case went a small color TFT monitor, a USB3 hub, a DisplayLink adapter, and and an Arduino Micro doing the job of USB-ifying the Commodore keyboard. The result is a pretty cool docking station, but one which he admits isn’t as nice to use as he’d like. Viewed through rose tinted glasses any PET was an amazing machine in its day, but a slightly lackluster keyboard and a tiny screen don’t quite have the same allure in a world of 4K monitors. Still, we’d have one on our desk.

The Pet appears in quite a few projects that have made it to these pages, for example showing YouTube videos.