[Glen Akins] had a WW2-era aircraft engine cowl flap indicator lying around (as you do) and thought it would make a jolly fine USB-attached indicator. The model in question is a General Electric model 8DJ4PBV DC Selsyn, which was intended for four-engined aircraft. For those not familiar with the purpose [Glen] explains in his detailed writeup, that piston-engine aircraft of that era were air-cooled, and during conditions of maximum engine power — such as during take-off — flaps on the side of the engine cowling could be opened to admit additional cooling airflow. These indicator dials were connected to a sender unit on each of the flap actuators, providing the pilots an indication of the flaps’ positions.

The mode of operation in the DC power environment of WW2-era aircraft utilised the concept of variable magnetic field orientation. The sender is a potentiometer, sending a voltage down the wire between 24V and ground. The indicator unit has a pair of coils set at 120 degrees around a ring, with the coils wired in series, and 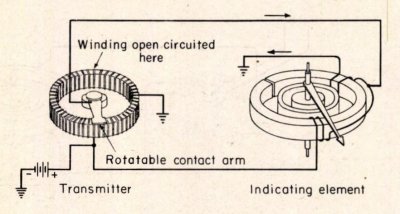 the center tap connected to the sender signal. The other ends of each coil connect to the DC power bus so that as the signal voltage varies, the coils produce a varying magnetic field. Lower voltages bias the field towards the coil connected to 24V, and higher voltages the other way. A permanent magnet in the center is attached to the indicator dial, with a small spring to bias it to the center. A very simple but effective arrangement, giving analog feedback of the actual flap position.

To interface this thing to modern technology, a custom PCB was constructed leveraging the USB functionality of the PIC16F1459 microcontroller, that [Glen] was already familiar with. Four Microchip MCP31HV41-502 digital potentiometers were pressed into service directly driving the coils of the indicator units. That might seem like an odd if not viable way to drive such a thing, but [Glen] goes into some extensive theory and some modeling to determine which devices would have sufficient margin, which is worth a read for the unfamiliar. After bit-banging the SPI connection to the digipots (even though the PIC has hardware SPI) [Glen] goes on to describe how the USB endpoints work, finishing off with a .NET application to drive it all.

We’ve seen plenty of hacks bringing retro hardware back to life, connecting to modern computing. Here’s a project that goes the other way, building custom aircraft instrumentation from modern parts.