Regular Hackaday readers may recall the Inkplate family of devices: open source all-in-one development boards that combine the power and versatility of the ESP32 with electronic paper displays salvaged from commercial e-readers. By taking the sharp, high-speed, displays intended for readers such as Amazon’s Kindle and bundling it together with all the hardware and software you need to make it work, the Inkplate provided a turn-key platform for anyone looking to get serious with e-paper.

Given the fact that their screens were pulled from recycled readers, it’s no surprise the previous Inkplate entries came in familiar 6 and 10 inch variants. There was even an upgraded 6 inch model that benefited from newer reader technology by adopting a touch-sensitive backlit panel, which we took a close look at last year. Their large displays make them excellent for wall mounted applications, such as a household notification center or constantly-changing art display. Plus, as you might expect, the Inkplate is an ideal choice for anyone looking to roll their own custom e-reader.

But of course, not every application needs so much screen real estate. In fact, for some tasks, such a large display could be considered a liability. Seeing a void in their existing product lineup, the folks at Soldered Electronics (previously e-radionica) have recently unveiled the diminutive Inkplate 2. This new miniature Inkplate uses the same software library as its larger predecessors, but thanks to its 2.13 inch three-color display, lends itself to a wider array of potential projects. Plus it’s considerably cheaper than the larger Inkplate models, at just $35 USD.

Considering the crowd sourced funding campaign for the Inkplate 2 blew past its goal in just 72 hours, it seems clear there’s plenty of interest in this new smaller model. But if you’re still not sure if it’s the e-paper solution you’ve been waiting for, maybe we can help — the folks at Soldered sent along a pre-production version of the Inkplate 2 for us to play around with, so let’s take it for a test drive and see what all the fuss is about.

Thanks to their far larger screens, earlier Inkplate models had plenty of free space on the PCB for extra hardware such as a real-time clock, temperature sensor, and MCP23017 I/O expander chip. But Soldered had to forgo such luxuries on the Inkplate 2, as the smaller PCB is already packed tight with just the ESP32 WROVER-E, CH340C UART chip, MCP73831 charge controller, and the various passives required to keep everyone happy. 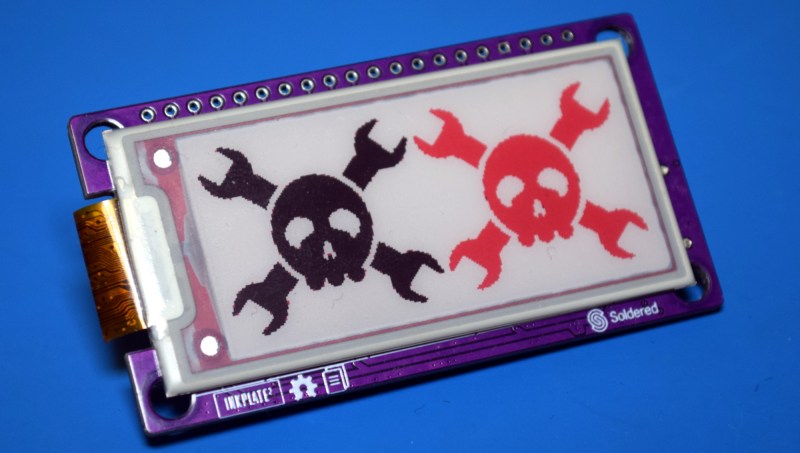 But even without the IO expansion hardware of the previous models, the Inkplate 2 still has a fair number of GPIO pins available which are broken out along the top side of the board, and there’s a Qwiic-compatible easyC connector on the back. You’ll be able to connect up to external sensors over I2C, and of course if you really needed more pins, adding your own I/O expander chip is always an option.

That said, I do miss the interactivity offered on the previous Inkplate models. The 6 and 10 inch featured touch-sensitive pads on the front of the PCB, and the 6PLUS had the luxury of a complete touch screen. While the board is admittedly tight, I still think they could have tucked in a side-mounted SMD momentary button. As it stands, you’ll need to take up a GPIO pin by wiring in your own button if you need a way to interact with your running program. 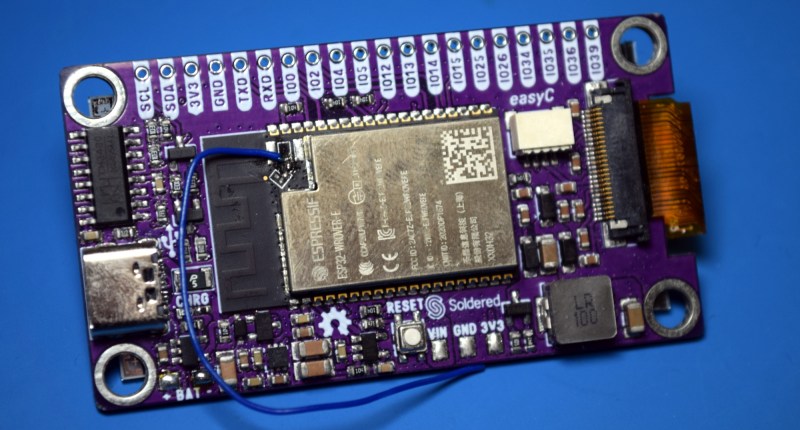 Another causality of the limited PCB space is the ESP32’s onboard antenna — best practice is to hang it off the edge of the PCB, or route out a notch behind it. Unfortunately neither option would have really worked in this case, meaning a likely reduction in the MCU’s radio reception. This may or may not have been a huge deal for many applications, but even so, Soldered added a provision for an external antenna on the Inkplate 2. While the prototype pictured here just has a bit of wire soldered on, the final production hardware has a proper IPX connector onboard.

Color, At a Cost

Since there aren’t any old two inch e-readers from which to salvage the displays, Soldered can’t boast that they’re keeping hardware out of landfills with each unit sold this time. But while the newly manufactured electronic-paper used in the Inkplate 2 might not be as green as the ones used in the Inkplate 6 and Inkplate 10, it is capable of doing a very nice red.

The 2.13″ panel has a resolution of 212 x 104, which gives it a PPI of 111. Combined with the wide viewing angles, and fantastic daylight readability, it looks great in person. Refresh rate is respectable in the B&W mode, but it should be noted that engaging the third color does significantly delay the process — expect to wait 20 to 30 seconds before the screen fully settles down after showing a three-color image.

But in practice, this isn’t really much of a concern. As Soldered shows in the demos on the campaign page, and as you quickly learn while playing with the hardware in person, the Inkplate 2 works best as secondary display that shows slowly changing data. Throw the day’s weather forecast on it, or your schedule for the next couple of hours. As long as you don’t require the information to be updated more than every 15 minutes or so, it would probably be a good fit for the Inkplate 2.

While the hardware is solid enough, the real star of the show is the phenomenal software, documentation, and experience that’s part of the Inkplate line of devices. For the higher-end models, which could set you back as much as $169 USD in the case of the Inkplate 10, this level of support was something of a given. After all, if you’re paying a premium price you’d expect a premium experience. But the fact that the $35 sticker price of the Inkplate 2 grants you access to this complete ecosystem is a pleasant surprise, and is perhaps one of the most exciting things about the product.

Like the previous models, the Inkplate 2 can be programmed either with the Arduino IDE or MicroPython, and also features the unique “Peripheral Mode” where the device can be controlled directly via commands sent over UART. Soldered also offers an online image converter (which has already been updated for three-color displays), as well as a GUI creator, though it’s not immediately clear if the latter will be updated for the Inkplate 2 given its lack of touch screen.

Getting up and running with the Inkplate 2 is incredibly easy. It took just minutes to add the board definitions and library to the Arduino IDE and edit the HTTP example to point to my server. From there, the device would periodically update its display with whatever image I provided it. Combined with some Python on the computer side, it made for a quick desktop display that will show whatever I throw at it.

Bang For Your Buck 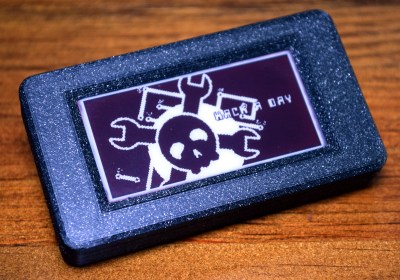 Now let’s get real for a minute here. If you’re reading Hackaday, you’re more than capable of hooking up an ESP32 to a small e-paper display without somebody holding your hand. You probably also know that the going rate of those two devices on eBay is less than the $35 Soldered is asking for the Inkplate 2. Sure they won’t be on a handy little PCB, and you won’t get the unifying power of USB-C, but those are hardly show stoppers.

That being said, I still think the documentation, tools, libraries, and end-user experience offered by the Inkplate 2 is more than worth the extra cost of this unified solution. It’s arguably the most straight-forward and painless way of getting info on a small e-paper display, which frees you up to tackle more important (and honestly, more interesting) tasks such as figuring out how to generate the data you want to push out to it.