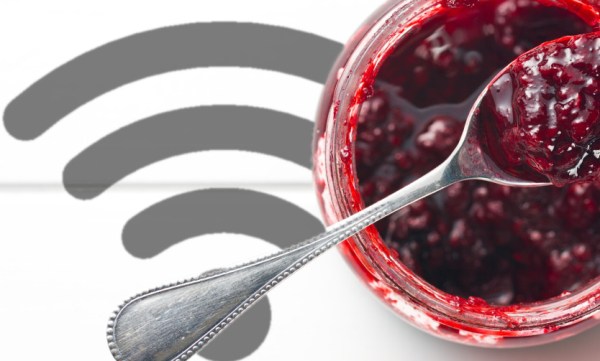 As we fill our airwaves with more and more wirelessly connected devices the question of what could disrupt this systems becomes more and more important. Here’s a particularly interesting example because the proof of concept shows that you don’t need specialized hardware to pull it off. [Bastian Bloessl] found an interesting tweak to previous research that allows an Atheros WiFi card to jam WiFi by obscuring ACK frames.

The WiFi protocol specifies an Acknowledgement Frame (ACK) which is sent by the receiving device after error correction has been performed. It basically says: “yep, I got that data frame and it checks out”. This error correcting process turns out to be the key to [Bastian’s] technique as it provides time for the attack hardware to decide if it’s going to jam the ACK or not.

The jamming technique presented by [Mathy Vanhoef] at the end 2014 outlined both constant and selective jamming. The selective part involved listening for data packets and analyzing them to determine if they are headed to a MAC the attacker wishes to jam. The problem is that by the time your commodity hardware has decoded that address it’s too late to jam the packet. [Bastian] isn’t trying to jam the data frame, he’s jamming the ACK that the receiver sends back. Without that acknowledgement, the sender will not transmit any new data frames as it assumes there is a problem on the receiving end.