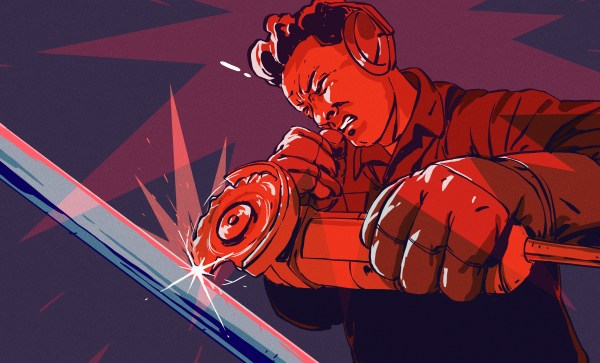 How cool would it be if there was a material that couldn’t be cut or drilled into? You could make the baddest bike lock, the toughest-toed work boots, or the most secure door. Really, the list of possibilities just goes on and on.

Researchers from the UK and Germany claim that they’ve created such a magical material. It can destroy angle grinder discs, resist drill bits, and widen the streams of water jet cutters.

The material is made of aluminium foam that’s embedded with a bunch of small ceramic spheres. It works by inducing retaliatory vibrations into the cutting tools, which turns the tools’ force back on themselves and quickly dulls their edges.

The creators have named the material Proteus after the elusive and shape-shifting prophet of Greek mythology who would only share his visions of the future with those who could get their arms around him and keep him still. It sounds like this material could give Proteus a run for his money.

The ceramic spheres themselves aren’t indestructible, but they’re not supposed to be. Abrading the spheres only makes Proteus stronger. As the cutting tool contacts them, they’re crushed into dust that fills the voids in the aluminium foam, strengthening the material’s destructive vibratory effect. The physical inspiration for Proteus comes from protective hierarchical structures in nature, like the impact-resistant rind of grapefruit and the tendency of abalone shells to resist fracture under the impact of shark teeth.

At this point, Proteus is a proof of concept. Adjustments would likely have to be made before it can be produced at any type of scale. Even so, the recipe seems pretty straightforward. First, an aluminium alloy powder is mixed with a foaming agent. Then the mixture is cold compacted in a compressor and extruded in dense rods. The rods are cut down to size and then arranged along with the ceramic spheres in a layered grid, like a metallurgical lasagna.

The grid is spot-welded into a steel box and then put into a furnace for 15-20 minutes. Inside the furnace, the foaming agent releases hydrogen gas, which introduces voids into the aluminium foam and gives it a cellular structure.

According to their paper, the researchers tried to penetrate the material with an angle grinder, a water jet cutter, and a drill. Of these, the drill has the best chance of getting through because the small point of contact can find gaps more easily, so it’s less likely to hit a ceramic sphere. The researchers also made cylindrical samples without steel cladding which they used to test the compressive strength and prove Proteus’ utility as a structural material for beams and columns. It didn’t fare well initially, but became less compressible as the foam matrix collapsed.

The creation process lends some leeway for customization, because the porosity of the aluminium foam can be varied by changing the bake time. As for the drill bit problem, tightening up security is as easy as adjusting the size and/or density of the ceramic spheres.

In the video after the break, you can watch a chunk of Proteus eat up an angle grinder disc in under a minute. Some may argue about the tool wielder’s technique, but we think there’s something to be said for any material that can destroy a cutting disc that fast. They don’t claim that Proteus is completely impenetrable, but it does look impressive. We wish they would have tried more cutting tools like a gas torch, or experimented with other destructive techniques, like plastic explosives, but we suppose that research budgets only go so far.