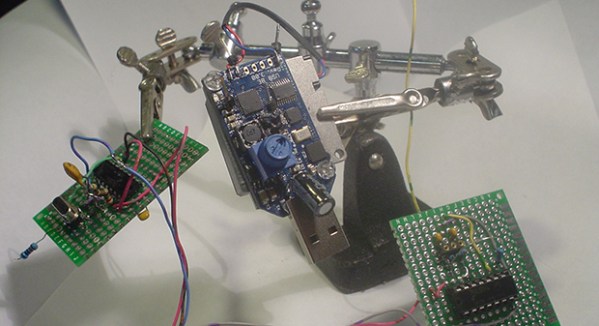 The name of the game in mining Bitcoins isn’t CPUs, GPUs, or even FPGAs. Now, hardcore miners are moving on to custom ASIC chips like the Block Erupter, For around $100 USD, you too can mine Bitcoins at 300 MH/s with 2.5 Watts of power and a single USB port. This speed isn’t enough for some people, like [Jeremy] who overclocked his Block Erupter to nearly twice the speed.

[Jeremy] begins his tutorial with a teardown of the Block Erupter hardware. Inside, he found a custom ASIC chip, an ATTIny2313, a USB UART converter, and a voltage regulator for the ASIC. By changing out the 12 MHz crystal connected to the ASIC and fiddling with the voltage with a trim pot, [Jeremy] was able to overclock the ASIC core from 336 MHz to 560 MHz. Effectively, he’s running two Block Eruptors for the price of one with the potential to actually make back the purchase price of his hardware.

It must be noted the 560 MHz figure comes from replacing the 12 MHz crystal with a 20 MHz one, and this mod only lasted about 20 minutes on [Jeremy]’s bench until the magic blue smoke was released. He recommends a 14 or 16 MHz crystal, netting a new speed of either 392 MHz or 448 MHz for a stable mod.