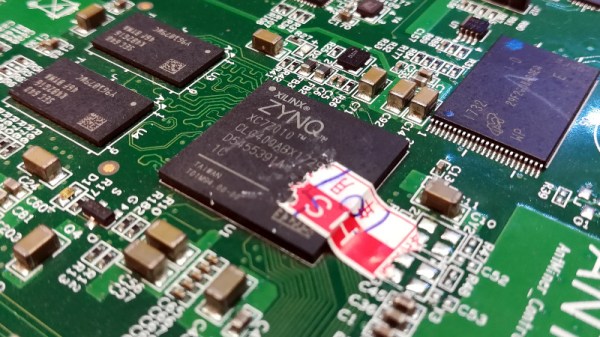 One of the exciting trends in hardware availability is the inexorable move of FPGA boards and modules towards affordability. What was once an eye-watering price is now merely an expensive one, and no doubt in years to come will become a commodity. There’s still an affordability gap at the bottom of the market though, so spotting sub-$20 Xilinx Zynq boards on AliExpress that combine a Linux-capable ARM core and an FPGA on the same silicon is definitely something of great interest. A hackerspace community friend of mine ordered one, and yesterday it arrived in the usual anonymous package from China.

There’s a Catch, But It’s Only A Small One

There are two boards to be found for sale, one featuring the Zynq 7000 and the other the 7010, which the Xilinx product selector tells us both have the same ARM Cortex A9 cores and Artix-7 FPGA tech on board. The 7000 includes a single core with 23k logic cells, and there’s a dual-core with 28k on the 7010. It was the latter that my friend had ordered.

So there’s the good news, but there has to be a catch, right? True, but it’s not an insurmountable one. These aren’t new products, instead they’re the controller boards for an older generation of AntMiner cryptocurrency mining rigs. The components have 2017 date codes, so they’ve spent the last three years hooked up to a brace of ASIC or GPU boards in a mining data centre somewhere. The ever-changing pace of cryptocurrency tech means that they’re now redundant, and we’re the lucky beneficiaries via the surplus market.

END_OF_DOCUMENT_TOKEN_TO_BE_REPLACED 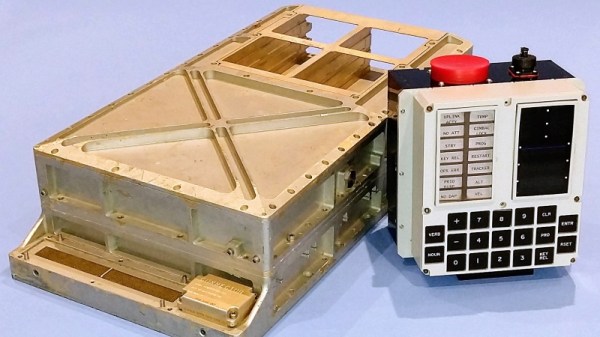 Imagine you’ve got an Apollo Guidance Computer, the machine that took men to the Moon 50 years ago. You’ve spent ages restoring it, and now it’s the only working AGC on the planet. It’s not as though you’re going to fly to the Moon with it, so what do you do with it? Easy – turn it into a perfectly awful Bitcoin mining rig.

The AGC that [Ken Shirriff] and others have been restoring barely resembles a modern computer. The AGC could only do about 40,000 operations per second, but raw speed was far less important than overall reliability and the abundant IO needed to run a crewed spacecraft. It was a spectacular success on the Apollo missions, but [Ken] wanted to know if turning it into a Bitcoin mining rig was possible.

[Ken] gives a great overview of how Bitcoin mining works, with one of the best explanations of the hashing algorithm we’ve seen. Getting that to run on the AGC was no mean feat, especially with limits imposed by the memory addressing scheme and the lack of machine instructions for manipulating words. He eventually got it working, though, clocking in at a screaming 10.3 seconds per Bitcoin hash. [Ken] estimates that the first coin will be successfully mined in a mere 400 zettaseconds, which is about a billion times older than the universe. With about 13 quadrillion years to the first ka-ching, you have plenty of time to watch a block mined in the video below; alas, it was an old block, so no coins were awarded to compensate the team for their efforts.

This isn’t the first time [Ken] has implemented a useless Bitcoin mine. The Xerox Alto mine was actually fast compared to the AGC, but it sure beats the IBM mainframe and punchcards.

END_OF_DOCUMENT_TOKEN_TO_BE_REPLACED

The public has latched onto the recent market events with an intense curiosity brought about by a greed for instant riches. In the last year alone, the value of Bitcoin has risen by 1,731%. We’re talking gold rush V2.0, baby. Money talks, and with a resounding $615 billion held up in cryptocurrencies, it is clear why this is assuredly not the first cryptocurrency article you have read — maybe even today. An unfortunate side effect of mass interest in a subject is the wildfire-like spread of misinformation. So, what exactly is a blockchain, and what can you still do now that everyone has finally jumped on the cryptocurrency bandwagon?

END_OF_DOCUMENT_TOKEN_TO_BE_REPLACED

With all the hype surrounding cryptocurrencies and the current not quite so high but still pretty eye-watering price of Bitcoin, there are some things which might once have been pure folly that could now be deemed worthy of pursuit. There is an excavation mission being considered to unearth a hard drive containing an early Bitcoin wallet in a Welsh landfill, for instance. But a more approachable task for you may be the possibility of mining using minimal hardware.

Take [Merlot Machina]’s project for example, implementing a Bitcoin miner on an ESP8266. Part of this is the timeless pursuit of answering the joke question: “Will it mine Bitcoin”, and the other part is looking at this like a lottery ticket. Is it a worthwhile punt at a prize for a minimal investment?

He gives us a rundown of some of the statistics involved, and comes away with the conclusion that it is something like a not-very-good lottery ticket. The ESP performs 1200 hashes per second while the entire Bitcoin community manages about 1.2 exahashes per second. This he calculates gives him a 1 in 1016 chance of mining a block every ten minutes, which for the tiny cost of an ESP and its relatively frugal power budget is a chance he sees as worth taking.

So far he has implemented the hashing algorithm and verified it against a known hash on an already-mined block. At this point though he’s hit a roadblock in the need to run Bitcoin core on a server to keep the ESP supplied with new block headers, so the ESP miner remains a proof of concept. The write-up is still an interesting read though, and given that many readers will have a few spare ESP boards it’s possible that one of you may take it to the next level and Win It Big. If that’s you, you’ll be able to sit on your private island sipping a cool drink, and laugh at the commenters who said it would never happen. Meanwhile here at Hackaday we’ll stick to tried-and-trusted revenue generation strategies, such as bringing you the latest hardware hacks.

This might seem a peculiarly slow miner, but it’s not the slowest we’ve seen by any means. The ever-prolific [Ken Shirriff] has tried it on an IBM 1401 mainframe and a Xerox Alto, and you can of course do it the old-fashioned way. 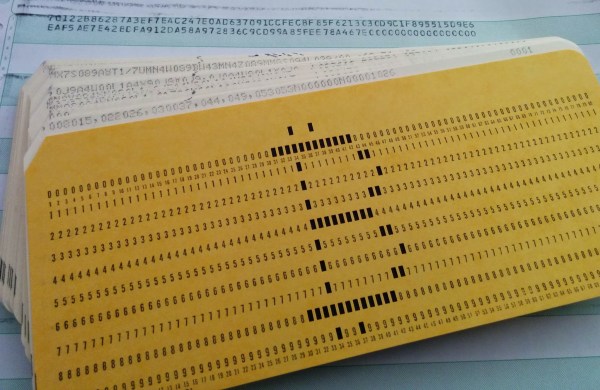 In days of yore, one could mine Bitcoin without much more than an AMD graphics card. Now, without specialized hardware it’s unlikely that you’ll make any appreciable headway in the bitcoin world. This latest project, however, goes completely in the other direction: [Ken] programmed a 55-year-old IBM mainframe to mine Bitcoin. Note that this is technically the most powerful rig ever made… if you consider the power usage per hash.

Engineering wordplay aside, the project is really quite fascinating. [Ken] goes into great detail about how Bitcoin mining actually works, how to program an assembly program for an IBM 1401 via punch cards, and even a section about networking a computer from this era. (Bonus points if he can get retro.hackaday.com to load!) The IBM boasts some impressive stats for the era as well: It can store up to 16,000 characters in memory and uses binary-coded decimal. All great things if you are running financial software in the early ’60s or demonstrating Bitcoin in the mid-2010s!

If it wasn’t immediately obvious, this rig will probably never mine a block. At 80 seconds per hash, it would take longer than the lifetime of the universe to do, but it is quite a feat of computer science to demonstrate that it is technically possible. This isn’t the first time we’ve seen one of [Ken]’s mainframe projects, and hopefully there are more gems to come!

The DEFCON badge this year was an impressive piece of hardware, complete with mind-bending puzzles, cap sense buttons, LEDs, and of course a Parallax Propeller. [mike] thought a chip as cool as the Propeller should be put to better use than just sitting around until next year so he turned it into a Bitcoin miner, netting him an astonishing 40 hashes per second.

Mining Bitcoins on hardware that doesn’t have much processing power to begin with (at least compared to the FPGAs and ASIC miners commonly used) meant [mike] would have to find some interesting ways to compute the SHA256 hashes that mining requires. He turned to RetroMiner, the Bitcoin miner made for an original Nintendo. Like the NES miner, [mike] is offloading the communication with the Bitcoin network to a host computer, but all of the actual math is handled by a single core on the Propeller.

Saving one core for communication with the host computer, a DEFCON badge could conceivably manage 280 hashes/second, meaning the processing power of all the badges made for DEFCON is about equal to a seven-year-old graphics card.