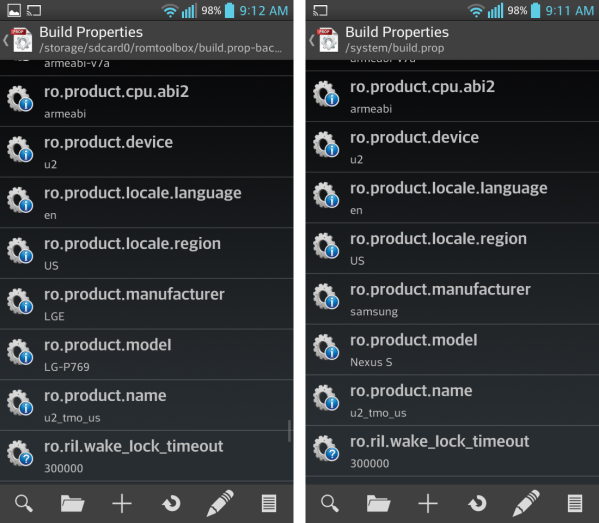 We finally got our hands on a Chromecast over the weekend and we love it! But it wasn’t without a bit of a speed bump. Including a quick initial setup, we had a YouTube video playing in our living room about three minutes after the package hit our mailbox. But we spent the next twenty minutes feeling like a moron because we couldn’t get the Netflix app on an Android phone to cast the video. Turns out there is a bug in the Netflix app that doesn’t add the Chromecast icon for all devices.

The issue is that the newest version of the Netflix app isn’t pushed to all devices. A fix is on the way, but we’re not good at waiting. We used this technique to trick Netflix into thinking we have different hardware. Notice from the screenshots above that one lists our device as an LG-P769 manufactured by LGE. That’s how our /system/build.prop file originally looked. By using the BuildProp Editor app we changed those settings to Nexus S by samsung. After rebooting several of our apps were missing from the app drawer, including Netflix. But they all still worked hitting the Play Store for reinstallation and we now have no problem casting Netflix.