There’s almost nothing you can’t build with the right set of Lego parts. [Rigjob] built up a Lego-based wireless remote follow-focus system that’ll give professional systems a run for their money.

Now [Rigjob] self-identifies as a hillbilly, but he’s not just a redneck with a camera. He’s set up the Lego controller to remember minimum and maximum focus positions as well as mark points along the way. The controller simply won’t turn the lens outside of the focus range, and an interactive graph shows you where you are within the range. For a focus wheel, he uses (drum-roll please!) a Lego off-road wheel. It looks really comfortable, usable, and actually quite professional.

There’s a lot of tech in the Lego controller and motors that make this “simple” hack simple. Under the hood, there’s a Bluetooth connection, a geared stepper motor with a position sensor, a communication protocol, and a whole ton of programming in the Lego controller that makes it all drag-and-drop programmable. But to a long-bearded hillbilly cameraman, it all looks like child’s play. And that’s the hallmark of good design. Kudos, Lego.

If you can’t get enough Lego camera tech, check out this DIY slit-scan stargate rig, or (what else?) a Lego 3D chocolate printer.

END_OF_DOCUMENT_TOKEN_TO_BE_REPLACED 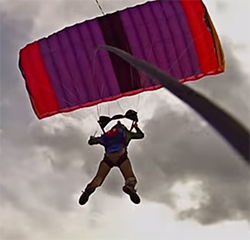 GoPros were invented for a few reasons, and skydiving is right at the top of that list. You’ll be hard pressed to find a regular skydiver that doesn’t own at least one of the little cameras, and there are a few examples of helmets with three or four GoPros tacked on.

This is an entirely new application. Yes, you can now film yourself skydiving with a third person view.

[Jason] hacked together this camera rig in an hour by strapping a GoPro on a Nerf Vortex football, tying a length of paracord to the camera mount, and connecting the other end to a hip ring on the parachute harness. It took three flights to get the canopy in the camera’s field of view, but the results are spectacular. It’s a tad bit unstable when turning, but the fins on the Nerf football make for a very, very stable shot.

[Jason] isn’t jumping out of a plane with this contraption already dangling underneath him; the football, camera, and paracord rig isn’t launched until the canopy fully deploys. It’s perfectly safe, but we’ll expect someone to get the idea of strapping a keychain camera to their pilot chute soon.