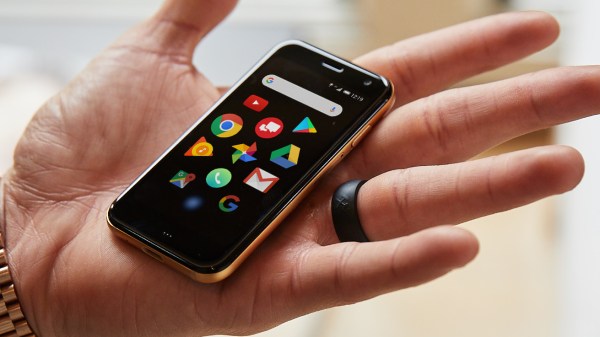 The mini-mobile phone [Jim Yang] got his hands on deserves a bit of background. Palm had the concept of a companion mobile phone, and this manifested itself in late 2018 as a cute palm-sized smartphone that one could carry around when one didn’t wish to haul along their “real” phone. This smaller and simpler phone was originally intended to share the same mobile number as one’s primary phone (though it has since been made able to work as a standalone device.)

[Jim] got his hands on a refurbished Palm PVG100, rooted it, and shared some pictures of the internal components. The phone was not carrier-locked, but getting it up and running was still a bit more complex than plugging in a SIM card. For example, voice calls worked fine but to gain access to mobile data on the Three UK mobile network required updating the Access Point Name (APN) settings. [Jim] also rooted the Android-based phone and describes how he removed Verizon bloatware.

Palm’s companion phone idea hasn’t really caught on in a commercial sense, but in a way, [Jim] is validating the concept. After getting it up and running, he attached it to his bike with a custom mount to enjoy the benefits of having a mobile phone along without actually risking his primary device.

In case you’re wondering, this Palm is indeed the same Palm that launched the PalmPilot in 1996, whose distinctive folding keyboard accessory has shown up in past hacks.