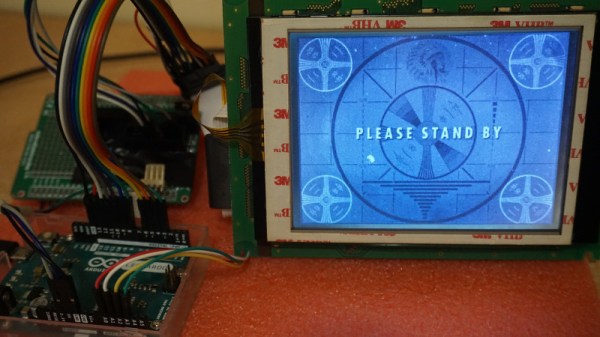 These days, you could be forgiven for thinking driving an LCD from a microcontroller is easy. Cheap displays have proliferated, ready to go on breakout boards with controllers already baked in. Load up the right libraries and you’re up and running in a matter of minutes. However, turn your attention to trying to drive a random LCD you’ve yanked out of a piece of old equipment, and suddenly things get harder. [Ivan Kostoski] was in just such a position and decided to get down to work.

[Ivan]’s LCD was a 320×240 STN device salvaged from an old tape library. The display featured no onboard controller, and the original driver wasn’t easily repurposed. Instead, [Ivan] decided to drive it directly from an Arduino Uno.

This is easier said than done. There are stringent timing requirements that push the limits of the 8-bit platform, let alone the need for a negative voltage to drive the screen and further hardware to drive the backlight. These are all tackled in turn, with [Ivan] sharing his tips to get the most flexibility out of the display. Graphics and text modes are discussed, along with optimizations that could be possible through the varied use of available RAM and flash.

The code is available on Github. If you need inspiration for your own controllerless LCD driver. [Ben Heck] has done similar work too, using FPGA grunt to get the job done. 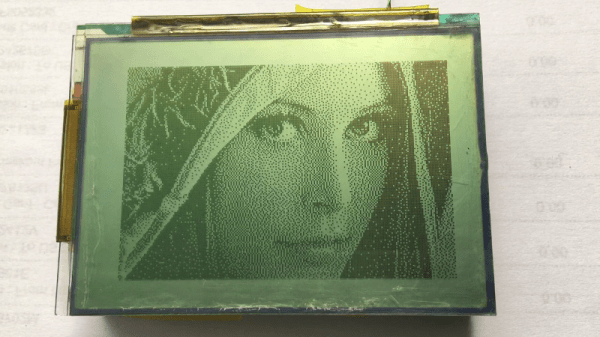 It’s possible to find surplus LCDs in all kinds of old hardware. Photocopiers, printers – you name it, there’s old junk out there with displays going to waste. Unfortunately, unlike the displays on sale at your favourite maker website, these often lack a controller and can be quite difficult to drive. [pataga] took on the challenge to drive a LCD of unknown provenance, using the power of the ESP32.

The LCD in question is a 240×160 monochrome device, that was initially being driven successfully with a Microchip PIC24 with a dedicated LCD driver peripheral. This allowed [pataga] to study the display interface under working conditions with the help of an oscilloscope. Inspiration was then taken from a project by [Sprite_tm], which used the I2S peripheral to drive a small LED display without placing load on the CPU.

Using the ESP32’s I2S peripheral in parallel mode makes it possible to shift data out in the correct format to drive the LCD without bit-banging IO pins and using up precious CPU time. This leaves processor cycles free to do interesting things, like generating 3D images using [cnlohr]’s routines from the Channel 3 project. There’s a little extra work to be done, with the frame signal being generated by an external flip flop and some fudging with the arrangement of various registers, but it’s a remarkably tidy repurposing of the I2S hardware, which seems to be the gift that keeps on giving. (Here it is spitting out VGA video through a resistor DAC.)

Code is available on Github for those looking to get at the nuts and bolts of the hack. It’s another build that goes to show, it’s not the parts in your junk box that count, but how you use them.