If you’ve used Spotify, you might have noticed a handy little code that it can generate that looks like a series of bars of different heights. If you’re like [Peter Boone], such an encoding will pique your curiosity, and you might set out to figure out how they work.

Spotify offers a little picture that, when scanned, opens almost anything searchable with Spotify. Several lines are centered on the Spotify logo with eight different heights, storing information in octal. Many visual encoding schemes encode some URI (Uniform Resource Identifier) that provides a unique identifier for that specific song, album, or artist when decoded. Since many URIs on Spotify are pretty long (one example being spotify :show:3NRV0mhZa8xeRT0EyLPaIp which clocks in at 218 bits), some mechanism is needed to compress the URIs down to something more manageable. Enter the media reference, a short sequence encoding a specific URI, generally under 40 bits. The reference is just a lookup in a database that Spotify maintains, so it requires a network connection to resolve. The actual encoding scheme from media reference to the values in the bars is quite complex involving CRC, convolution, and puncturing. The CRC allows the program to check for correct decoding, and the convolution enables the program to have a small number of read errors while still having an accurate result. Puncturing is just removing bits to reduce the numbers encoded, relying on convolution to fill in the holes.

[Peter] explains it all in his write-up helpfully and understandably. The creator of the Spotify codes stopped by in the comments to offer some valuable pointers, including pointing out there is a second mode where the lines aren’t centered, allowing it to store double the bits. [Peter] has a python package on Github with all the needed code for you to start decoding. Maybe you can incorporate a Spotify code scanner into your custom Spotify playing mini computer. 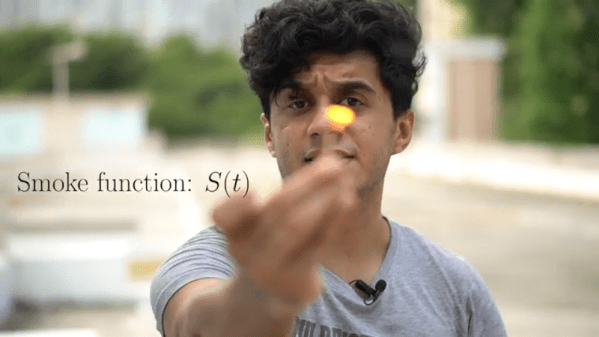 Signals and systems theory is a tough topic. Terms like convolution and impulse response can be hard to understand on a visceral level and most books that talk about these things emphasize math over intuition. [Discretised] has a YouTube channel that already has several videos that promise to tackle these topics with “minimum maths, maximum intuition.” We particularly noticed the talks on convolution and impulse response.

We think that often math and intuition don’t always come together. It is one thing, for example, to know that E=I times R, and power is I times E, but it is another to realize that a half-watt transmitter delivers 5V into a 50Ω load and that one watt will take just over 7V into that same load.

The example used is computing how much smoke you can expect to create by setting off fireworks. We presume the math models are notional since we imagine a real model would be pretty complex and involve things like wind data. But it still makes a nice example.

If you don’t know anything about the topic, these might not be the right ones to try to learn the basics. But we do applaud people sharing their intuition on these complex subjects.

END_OF_DOCUMENT_TOKEN_TO_BE_REPLACED

One of the things hard about engineering — electrical engineering, in particular — is that you can’t really visualize what’s important. Sure, you can see a resistor and an LED in your hands, but the real stuff that we care about — electron flow, space charge, and all that — is totally abstract. If you just tinker, you might avoid a lot of the inherent math (or maths for our UK friends), but if you decide to get serious, you’ll quickly find yourself in a numerical quicksand. The problem is, there’s mechanically understanding math, and intuitively understanding math. We recently came across a simple site that tries to help with the latter that deserves a look.

If you don’t know what we mean by that, consider a simple example. You can teach a kid that 5×3 is 15. But, hopefully, a teacher at some point in your academic career pointed out to you what the meaning of it was. That if you had five packages of three items, you have 15 items total. Or that if you have a room that is five feet on one side and three feet on the other, the square footage is 15 square feet.