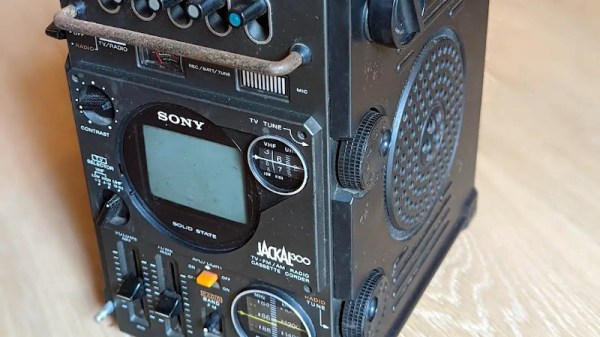 As consumer electronics companies chase profits on tighter and tighter margins, it seems like quality is continually harder to find for most average consumer-grade products. Luckily, we don’t have to hunt through product reviews to find well-built merchandise since we have the benefit of survivorship bias to help us identify quality products from the past that have already withstood the test of time. [Tom] has forever been fond of this particular Sony TV/radio combo from the ’70s so he finally found one and set about modernizing it in a few key ways.

Among the modifications to this 1978 Sony FX-300 include the addition of a modern color display, Bluetooth, an upgraded FM radio, and a microphone. At the center of all of this new hardware is a Teensy 4 which [Tom] has found to be quite powerful and has enough capabilities to process the audio that’s being played in order to make visual representations of the sound on the screen. He also implemented a bitcrusher filter and integrated it into the controls on the original hardware. He’s using an optimized version of this library to cram all of that processing ability into such a small chip, and the integration of all this new hardware is so polished that it looks like it could be an original Sony stereo from the modern era.

While some may complain about restomod-type builds like this, we don’t really see any need to be arbitrarily or absolutely faithful to bygone eras even if the original hardware was working properly in the first place. What works is taking the proven technology of the past and augmenting it with modern features to enjoy the best of both worlds. Much like this hi-fi stereo which blends the styles and technology of the 90s with that of the 60s in an equally impressive way. 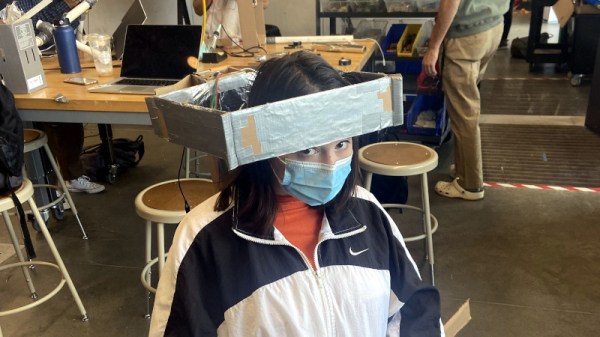 Assistive technologies have a pretty big presence here on Hackaday, and this hack is nothing short of interesting. [kerchoo_22] is working on a hands-free video game controller as a final project for her engineering class and we think it’s worth sharing.

The Arduino Leonardo, having a native USB port, is able to directly emulate a keyboard. Each conductive pad is mapped to a different key press corresponding to different functions within the game. Left, right, shoot, etc. And there you have it, gameplay without using hands or a controller!

Now, it seems as though [kerchoo_22] put an appropriate amount of cushion on the head pads, so there probably isn’t much danger of a concussion. Either way, you can never be too careful. 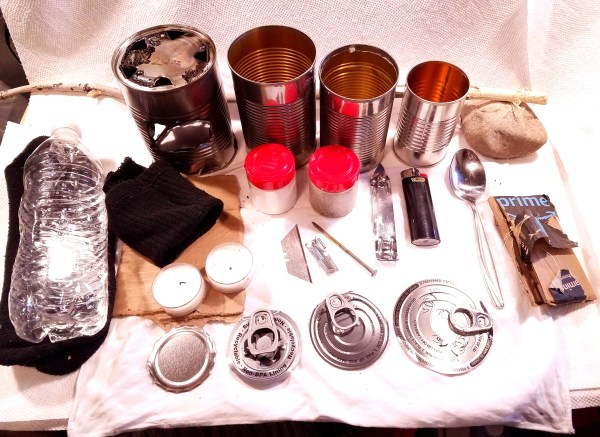 Let’s face it, times are hard, and winter is imminent in the northern hemisphere. No matter how much you have to your name, there’s nothing like a cup of hot tea or a warm meal on a cold day. So if you need a snow day activity, consider preparing for whatever may come to pass by building yourself a complete hobo stove system out of empty cans.

[ElectroIntellect]’s stove consists of a 20oz can turned upside down with several holes made in the bottom for heat to rise. The smaller cans are used for cooking pots, and the smallest as a cup. The stove itself is meant to run on flaming twigs stuffed into the base, or a couple of tealight candles if you can only find green wood around.

This comprehensive guide covers everything from building the system to packing it up safely and taking it out to cook in the concrete wilderness. As a special bonus, [ElectroIntellect] brews up some hobo coffee on the stove using an old (clean) sock, and prepares a can of chili in under an hour with candle power.

Too much hardware for you? You can make a disposable rocket stove out of wood. 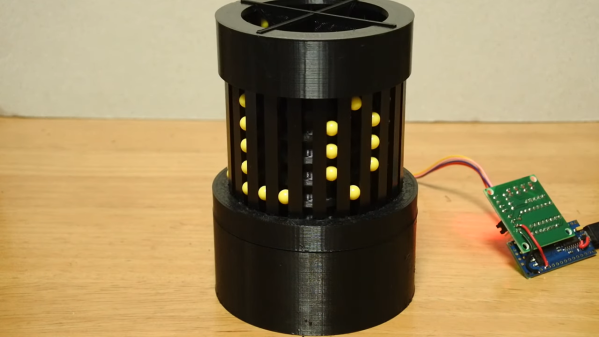 Don’t get us wrong — we love unique displays as much as anyone. But sometimes we stumble across one that’s so unique that we lack the basic vocabulary to describe it. Such is the case with this marble-raising dot-matrix alphanumeric display. But it’s pretty cool, so we’ll give it a shot.

The core — literally — of [Shinsaku Hiura]’s design is a 3D-printed cylinder with a spiral groove in its outside circumference. The cylinder rotates inside a cage with vertical bars; the bars and the grooves are sized to trap 6-mm AirSoft BBs, which are fed into the groove by a port in the stationary base of the display. BBs are fed into the groove at the right position to form characters, which move upwards as the cylinder rotates. Just watch the video below — it explains it far better than words can.

The clever bit is how the BBs are fed into the groove. Rather than have a separate mechanism to gate the feed port, there’s a backlash mechanism that opens the port when the motor powering the drum runs in reverse for a bit. It’s a clever use of cams to get the job done without adding an extra servo, which sort of reminds us of the design parsimony exhibited in his one-servo seven-segment display.

It’s not clear that this would be a very practical display, but that doesn’t stop it from being cool. Although, [Shinsaku Hiura] just released a follow-up video showing a bigger version of this used to display upcoming events from Google Calendar, so perhaps we’re wrong. END_OF_DOCUMENT_TOKEN_TO_BE_REPLACED 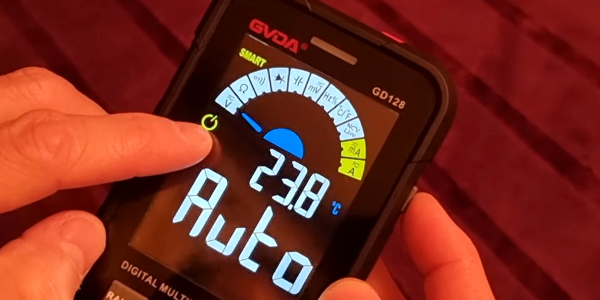 We’ve noticed lately that some cheap meters have gone to having big colorful screens. The screens aren’t dot matrix, but still have lots of graphics that could be useful or could be distracting eye candy, depending. The really cheap ones seem more like a gimmick, but [OM0ET] took a look at one that looked like a fair midrange instrument with some useful display features, the GVDA GD128.

A lot of the display shows the current function of the meter. No need for an expensive multiposition switch or rows of interlocking pushbuttons. Many of these new meters also have non-contact voltage sensors, which is handy. Otherwise, it looks like a pretty conventional cheap meter. END_OF_DOCUMENT_TOKEN_TO_BE_REPLACED

Let’s launch into a round-up of stories that are out of this world, as we take a look at what’s happening in the realm of space exploration.

Ten Billion Dollars For A Telescope? Don’t Drop It!

Perhaps the most highly anticipated space mission of the moment is the James Webb Space Telescope, an infra-red telescope that will be placed in an orbit around the Earth-Sun L2 Lagrange point from which it will serve as the successor to the now long-in-the-tooth Hubble telescope. After many years of development the craft has been assembled and shipped to French Guiana for a scheduled Ariane 5 launch on the 22nd of December. We can only imagine what must have gone through the minds of the engineers and technicians working on the telescope when an unplanned release of a clamp band securing it to the launch vehicle adapter sent a vibration throughout the craft. Given the fragility of some of its components this could have jeopardised the mission, however after inspection it was found that no damage had occurred and that space-watchers and astronomers alike can breathe easy.

END_OF_DOCUMENT_TOKEN_TO_BE_REPLACED 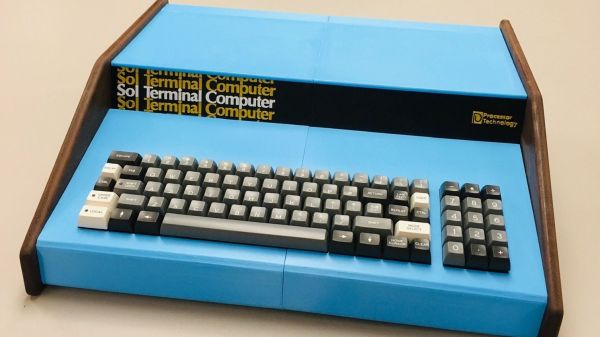 In the early years of the computer revolution, a machine like the Sol-20 really stood out. Where most hobbyist machines had front panels that bristled with toggle switches and LEDs, the Sol-20 was a sleek, all-in-one that looked like an electric typewriter in a walnut-trimmed box. Unfortunately, it was also quite expensive, so not that many were sold. This makes them hard enough to find 40 years later that building his own reproduction Sol-20 is about the only way for [Michael Gardi] to have one of his own.

In a lot of ways, the Sol-20 anticipated many of the design elements that would come into play later. Like the Apple and Commodore machines that were coming down the pike, the Sol-20 was intended to be plug and play. [Mike] celebrates that design with a full-size reproduction of the original, concentrating on its unique aesthetic aspects. The reproduction mimics the striking blue case, with its acrylic front panel and walnut sides. The keyboard is also an exact match for the original, in looks if not in function — the capacitive mechanism proved too difficult to replicate, so he opted for a kit using Cherry switches and custom keycaps. [Mike] also used his proven technique for 3D-printing the memorable Sol-20 logo for the front panel, in the correct font and color.

Under the hood, a Raspberry Pi runs an 8080 emulator, which supports a range of virtual devices, including a cassette tape drive and the video output. For fun, [Mike] also imagined what a CRT display for the Sol-20 would have looked like, and added that to his build. It’s a great-looking machine that never was, and we appreciate the attention to detail. We’ve seen that before — his 2/3-scale VT-100 terminal comes to mind, as does his reproduction of a 1960s computer trainer.