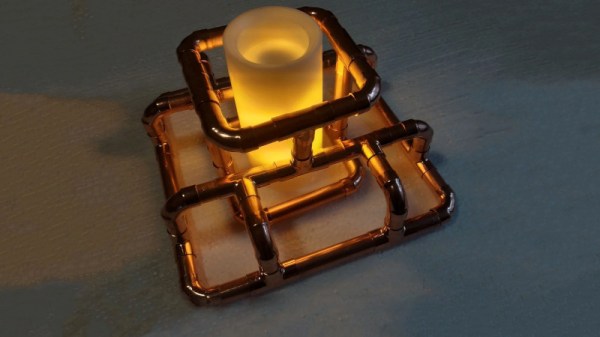 Copper is a material with many applications; typically, it’s used for electrical wiring or in applications where good heat conductivity is a requirement. However, it can also make for an attractive material in furnishings, which [Andrei Erdei] decided to explore.

[Andrei]’s work began in OpenSCAD, where he wrote scripts to enable the quick and easy assembly of various designs. The modular nature of commercially-available copper pipe and fittings allows complex structures to be assembled, particularly if you’re a fan of 90-degree bends. The final renders of some of these designs are impressive, with the coffee table design a particular highlight. Staying conceptual wasn’t enough, however, so [Andrei] set out to build one of his designs. Constructing a table lamp shroud out of copper parts was successful, though the real components have flanges and other features that aren’t represented in the rendering.

It’s a project that shows the value of tools such as OpenSCAD to aid the design process before committing to cutting real-world materials. While the designs on screen aren’t perfect representations of what’s possible in reality, it still proves to be a useful guide.

We’re a fan of the aesthetic, and would love to see more done with copper pipe as a construction kit. Global ore prices may limit experimentation, however. Alternatively, you can always harvest the metal from scrap! 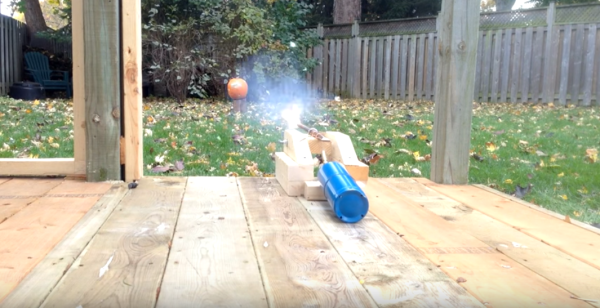 If your local surplus store is fresh out of supercapacitors but you’re just really in the mood to fire stuff at other stuff, check out [austiwawa]’s step-by-step guide to building a thermal cannon. It shoots whatever will fit into a 1/2″ copper pipe, propelled by cut-up matchheads and lit by a propane torch. [austiwawa] demonstrates it by firing an AA battery at an unsuspecting pumpkin. For what it’s worth, we don’t necessarily condone applying this much heat to alkaline cells.

[austiwawa] used a copper pipe for the barrel because it provides the fastest heat transfer. One end of it is flattened and folded over to form the propellant chamber. A couple of packs worth of match heads are tamped down into the folded end with a paper towel serving as wadding. [austiwawa] tosses in his battery, lights the torch, and then runs away.

This whole dangerous contraption is secured to a wooden base with a u-bolt and a couple of pipe straps, and suspended between more pieces of wood with a length of threaded rod for stability and aiming.

We’ll let the safety-conscious readers do our work for us in the comments, but in the meantime, note that this thing is not safe. As [austiwawa] demonstrates, the copper gets brittle and will split open along the folded edge.

But kudos anyway to [austiwawa] for showing shot after shot of the cannon in action at the end of his video. You know where to find it.

If it’s a stronger, more beautiful barrel you’re after, just machine one by hand.

END_OF_DOCUMENT_TOKEN_TO_BE_REPLACED 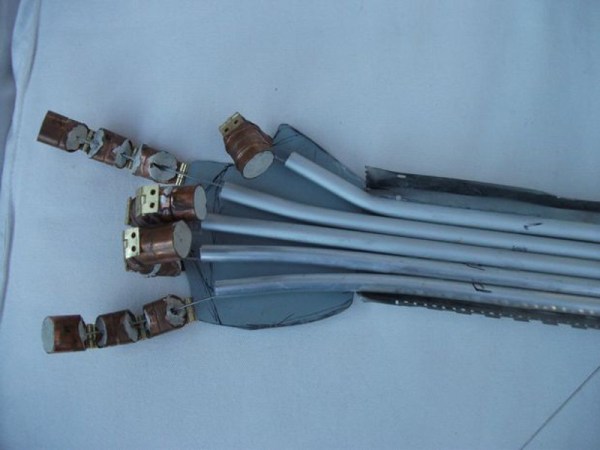 According to his Instructables profile, [bwebby] wants to make cool stuff in the special effects industry. We think he has a pretty good chance at it based on the animatronic hand he built.

The finger segments are made from copper pipe. They are connected to each other and to the sheet metal palm with tiny hinges and superglue. That stuff inside the finger segments is epoxy putty. It keeps the ends of the tendons made from bicycle gearing cable firmly attached to the fingertip segments, and provides a channel through the rest of the fingers. These cables run through 50mm aluminium tubes that are set in a sheet metal forearm, and they connect to high-torque servos mounted on a piece of MDF. [bwebby] used a Pololu Mini Maestro to control the servos using the board’s native USB interface and control software.

Watch [bwebby] run through some movements and try out the grip after the break. If you want to make an animatronic hand but aren’t ready for this type of undertaking, you could start with an approach closer to puppetry.

END_OF_DOCUMENT_TOKEN_TO_BE_REPLACED

While being caught out in the rain skiing, [Andrew] was left with a pair of soaking wet gloves. Leaving them to air dry did little good, as after 3 days they were still wet, and blowing a fan at them did little to nothing to help the situation. Luckily [Andrew] had been thinking about ways to make a forced air glove drier for some time now using standard plumbing fittings.

A prototype was made similar to consumer models where the glove is fit over the end of a pipe, and while this worked great to dry the palms, it did not help the wet finger situation at all. In order to solve this issue a new design was whipped up featuring 4 fixed fingers and a movable thumb made out of copper pipe. A little drilling, and soldering was performed then the metal hand was then duct taped to the end of a hair drier, turning soaked gloves into perfectly dry ones in about three hours.