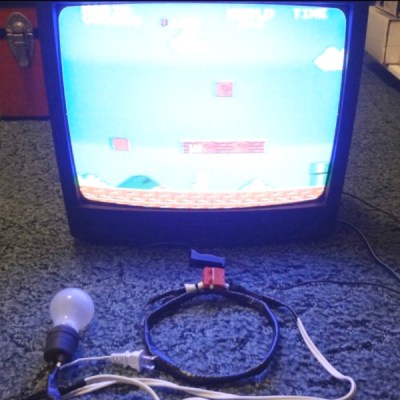 END_OF_DOCUMENT_TOKEN_TO_BE_REPLACED

The modern office has become a sea of LCD monitors. It’s hard to believe that only a few years ago we were sitting behind Cathode Ray Tubes (CRTs). People have already forgotten the heat, the dust, and the lovely high frequency squeal from their flyback transformers.

There was one feature of those old monitors which seems to be poorly understood. The lowly degauss button. On some monitors it was a physical button. On others, it was a magnet icon on the On Screen Display (OSD). Pressing it rewarded the user with around 5 seconds of a wavy display accompanied by a loud hum.

But what exactly did this button do? It seems that many never knew the purpose of that silly little button, beyond the light-and-sound show. The truth is that degaussing is rather important. Not only to CRTs, but in many other electronic and industrial applications.

Of Shadow Masks and Aperture Grilles

A CRT has quite a few components. There are three electron guns as well as steering and convergence coils at the rear (yoke) of the tube. The front of the tube has a phosphor-coated glass plate which forms the screen. Just behind that glass is a metal grid called the shadow mask. If you had enough money for a Sony screen, the shadow mask was replaced by the famous Trinitron aperture grille, a fine mesh of wires which performed a similar function. The shadow mask or aperture grille’s  job is to ensure that the right beams of electrons hit the red, green, or blue phosphor coatings on the front of the screen.

This all required a very precise alignment. Any stray magnetic fields imprinted on the mask would cause the electron beams to bend as they flew through the tube. Too strong a magnetic field, and your TV or monitor would start showing rainbows like something out of a 1960’s acid trip movie. Even the Earth’s own magnetic field could become imprinted on the shadow mask. Simply turning a TV from North to East could cause problems. The official term for it was “Color Purity”. 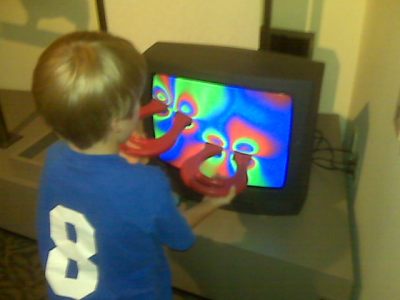 These issues were well known from the early days of color TV sets. To combat this, manufacturers added a degaussing coil to their sets. A coil of wire wrapped around the front of the tube, just behind the bezel of the set. When the set was powered on, the coil would be fed with mains voltage. This is the well-known ‘fwoomp and buzz’ those old TV sets and monitors would make when you first turned them on. The 50 Hz or 60 Hz AC would create a strong moving magnetic field. This field would effectively erase the imprinted magnetic fields on the shadow mask or aperture grille.

Running high current through the thin degaussing coil would quickly lead to a fire. Sets avoided this by using a Positive Temperature Coefficient (PTC) thermistor in-line with the coil. The current itself (or a small heating coil) would heat up the PTC, causing resistance to increase, and current through the coil to drop. After about 5 seconds, the coil was completely shut down, and the screen was (hopefully) degaussed.

As time went on monitors became embedded systems. The PTC devices were replaced by transistors controlled by the monitor’s main microcontroller. Monitor manufacturers knew that their sets were higher resolution than the average TV set, and thus even more sensitive to magnetic fields. Users are also more likely to move a monitor while using it. This lead the manufacturers to add a degauss button to the front of their sets. A push of the button would energize the coil for a few seconds under software control. Some monitors would also limit the number of times a user could push the button, ensuring the coil didn’t get too hot.

Holding a magnet near the front of a black and white (or a monochrome ‘green screen’) CRT created visible distortion, but no lasting damage. Mid-century hackers who tried the same trick with their first color TV quickly learned that the rainbow effect stayed long after the magnet was moved away. In extreme cases like these, the internal degaussing coil wouldn’t be strong enough to clear the shadow mask.

When all else failed, a handheld degaussing coil or wand could be used. Literally waving the magic wand in front of the screen would usually clear things up. It was of course possible to permanently damage the shadow mask. Back in 2007, I was working for a radar company which had been slow to switch to LCD monitors. Being a radar shop, we had a few strong magnetron magnets lying around. One of these magnets was passed around among the engineers. Leaving the magnet under your monitor overnight would guarantee rainbows in the morning, and a shiny new LCD within a few days.

CRTs aren’t the only devices which use degaussing coils. The term was originally coined in 1945 by Charles F. Goodeve of the Royal Canadian Naval Volunteer Reserve (RCNVR). German mines were capable of detecting the magnetic fields in a naval ship’s steel hull. Coils were used to mask this field. The Queen Mary is one of the more famous ships fitted with a degaussing coil to avoid the deadly mines.

Even mechanical wristwatches can benefit from a bit of degaussing. A watch which has been magnetized will typically run fast. Typically this is due to the steel balance spring becoming a weak magnet. The coils of the spring stick together as the balance wheel winds and unwinds each second. A degaussing coil (or in this case, more properly a demagnetizer) can quickly eliminate the problem.

So there you have it. The magic degaussing button demystified!

[Ed] was tasked with adding push-button degaussing to an arcade cabinet’s CRT console. The display can be rotated to portrait mode for games that require it, but each time this is done, the magnetic fields get out of whack.

Fortunately, the schematics arrived with the display. [Ed] found that the degauss coil is connected in series with a PTC fuse in an odd arrangement that he didn’t agree with. He decided to use an SSR to switch the coil, and after making lots of transistor-based designs on paper, grabbed a nearby Arduino.

[Ed] took off the PTC and soldered in two wires to its pads for the SSR. He added a wire to the power supply decoupling cap to power the new deguassing circuit and connected the SSR to the Arduino as an open collector input. There was just enough space available to mount the relay to the frame’s base and the Arduino on the side. [Ed] wrote a short method to trigger the SSR and reconnected the PTC fuse. Now it degausses at power up as well as on demand.