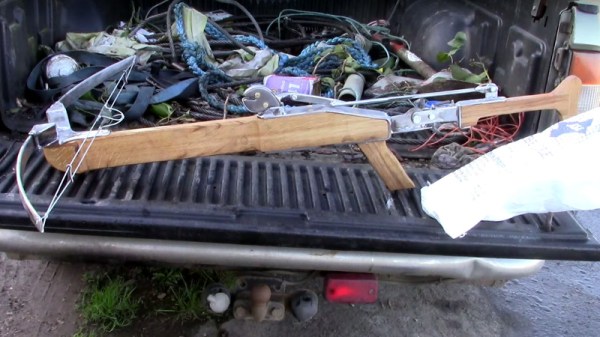 The would-be invader of a mediaeval kingdom could expect to face some stern opposition from a variety of formidable weaponry. Making modern versions of these deadly curiosities seems to be a popular pursuit, and the bug has bitten [Turbo Conquering Mega Eagle], who’s created what he calls a “Stonebow”, a crossbow on steroids that fires stones or large ball bearings with considerable force.

It uses a couple of leaves from automotive springs, mounted in a welded steel riser with two strings and a pouch for the projectile. The barrel is an oak fencing post, and at its other end is a cocking lever which also forms a stock, and a cleverly designed trigger mechanism. The projectile is loaded, the bow is cocked, and it is fired at a scrap Land Rover radiator in which it places a satisfying impact mark.

Despite two successful firings it’s evident that so much force isn’t easy to contain. The crimps that secure the strings aren’t up to the job, and neither is the oak fence post, which has cracked at the end. We trust that our Essex hacker friend will return having fixed these flaws, and more defenceless scrap car parts will be sacrificed for our entertainment.

We’ve featured [Turbo Conquering Mega Eagle] before, most recently building a mini-bike for his youngsters. Meanwhile, enjoy the Stonebow in the video below the break.

END_OF_DOCUMENT_TOKEN_TO_BE_REPLACED 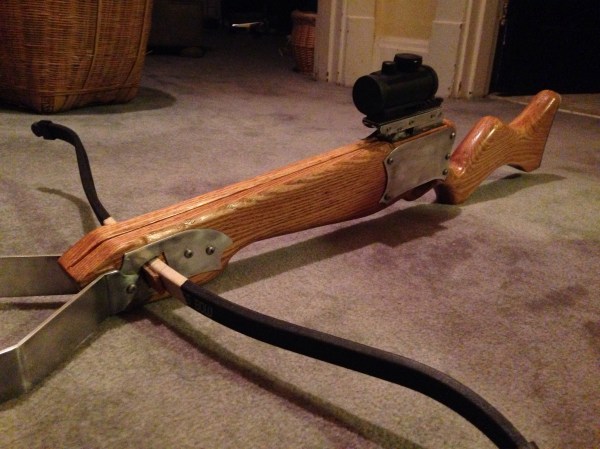 Curious if he could, [Gignathiosis] decided he wanted to try building his own crossbow. So he did.

He built the entire weapon using hand-tools, minus a drill for the holes, though he could have gotten a brace for that bit. The most impressive part is that he used a hacksaw to carve up a block of aluminum into the trigger release — a job normally done by a mill. The only modern components on the bow is the limb (which he ordered off Amazon) and a bit of tactical rail for his scope. The end result is a gorgeous hand-made cross-bow.

There’s just something so satisfying about manufacturing old technology using hand tools. It probably has something to do with the thought that, if you ended up back in time somehow, you could use your 21st century knowledge as a hacker to change the world… and maybe become a ruler — or a magician — as long as you don’t do something that results in your entire existence vanishing.

Though if you really wanted to mess up history — take back a fully-automatic crossbow with you instead.