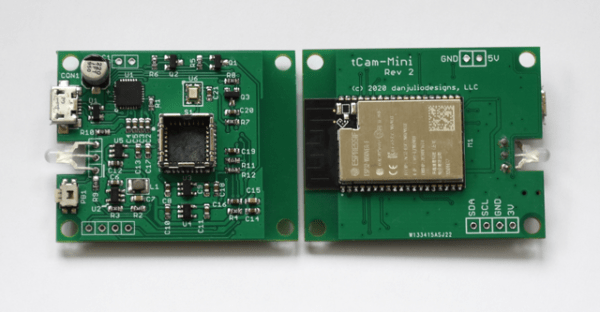 With how expensive thermal cameras are, why not build your own? This is the goal with which [Dan Julio] set out a while ago, covering the project in great detail. While the ultimate goal is to create a stand-alone solution, with its own screen, storage and processing, the TCam-Mini is an interesting platform. Using the 160×120 pixel FLIR Lepton 3.5 thermal sensor, and combining it with a custom PCB and ESP32 module for wireless, he created a wireless thermal camera called the TCam-Mini along with accompanying software that can display the radiometric data. 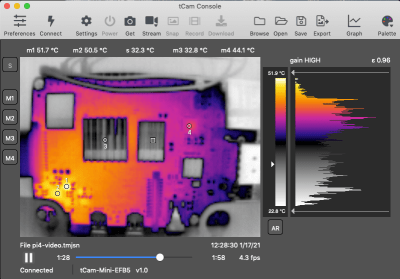 The project is available on GitHub, as well as as a GroupGets crowd-funding campaign, where $50 gets one a TCam-Mini board, minus the $199 Lepton 3.5 sensor. Not cheap, but quite a steal relative to e.g. the FLIR One Pro camera add-on module. Compared to the aforementioned FLIR One Pro, there’s a definite benefit in having a more portable unit that is not reliant on a smartphone and accompanying FLIR app. Being able to load the radiometric data directly into a desktop application for processing makes it a closer match to the professional thermal cameras which [Dan] states that he’d like to get as close to in terms of features as possible.

Recently [Dan] has also begun to further characterize these Lepton sensors, in order to see whether their accuracy can be improved from the rated +/- 5-10 °C. For this he repurposed an old in-ear thermometer calibration device. Along with tweaking the ESP32 firmware, there is still a lot that can be done with the TCam-Mini, but it sure looks like a fun project to tinker with if one is into Leptons. 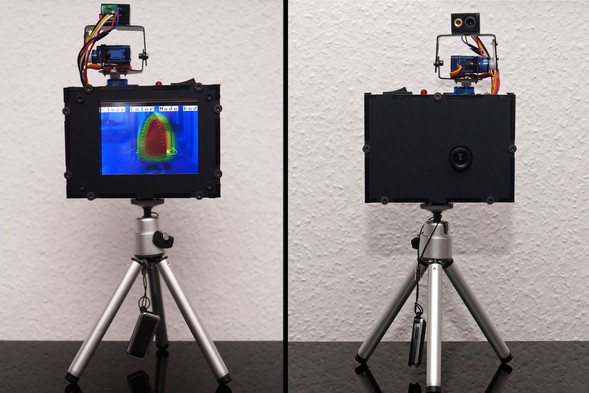 [Max Ritter] is a 21 year old student of information technology at the University of Applied Science at Weingarten, Germany. Three years ago he brought us the DIY Cheap-Thermocam, a tool for thermal imaging that cost <$100. Since then he’s made a few upgrades.

The original Cheap-Thermocam made use of an Arduino, the sensor from a thermometer gun and a few XY servos. In about 2 minutes the XY servos can scan and measure 1344 points using the thermometer’s sensor, creating a heat-vision map of 42 x 32 pixels — not amazing, but it worked — and it was cheap!

The new version (V3) has its own ARM Cortex M3 processor, it measures 3072 points in 2 minutes from -70°C to 380°C with an accuracy of 0.5°C, and it exports its images at a resolution of 640 x 480 –close to commercial offerings! It’s not capable of real-time scanning, but for the majority of purposes you need one of these for — it’s really not that necessary.