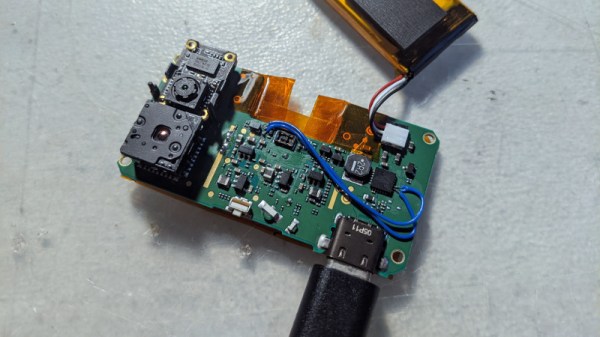 The Flir One Pro is a thermal camera that attaches to a mobile phone with a USB-C plug. [Gigawatts] has one, and unfortunately managed to drop it, breaking the USB-C plug and rendering the device useless. The plug is separate from the main PCB, an assembly of its own with a flexible cable, but FLIR are not interested in supplying spares. What was the answer? Wire data lines into the device’s charging port, of course!

The One Pro has its own battery, and to avoid draining the phone it is charged through another USB connection, this time a socket. The data lines aren’t connected, which necessitated some very careful soldering of wire-wrap wire to an SMD package to fix. When completed and secured with glue the resulting camera works with a USB-C cable, and there are plans to mount a tripod thread receptacle in the space left by the USB-C plug.

It’s disappointing that Flir choose not to supply replacements for the USB-C plug assembly, seemingly they see the device as a throwaway piece of consumer electronics rather than the expensive instrument that it is. This modification should at lease allow some unfortunate One Pro owners to revive their dead cameras.

If you’re curious about the Flir One series of cameras, perhaps you’d like to read our review. 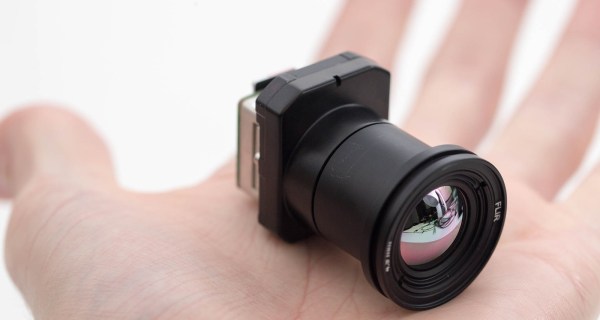 FLIR are making some really great miniature thermal cameras these days, designed for applications such as self-driving cars, and tools that help keep firefighters safe. That’s great and all, but these thermal cameras are so cool, you really just want to play with one. That’s what [greg] was thinking when he designed a PCB backpack that captures thermal images from a FLIR Boson and stores it on an SD card. It’s a thermal action cam, and an impressive bit of FPGA development, too.

The FLIR product in question is a Boson 640, an impressive little camera that records in 640×512 resolution, with a 60 Hz update rate. This one’s got the 95° field of view, giving it a very good specification in a very small footprint. This is a huge improvement over FLIR’s Tau camera, for which [greg] built a breakout board with Ethernet and DDR memory a few years ago. Once he found out about the Boson, he figured a backpack PCB for this camera would be possible and a great excuse to teach himself FPGAs with a hands-on project.

With an impressive ability to find the perfect part, [greg] sourced a Lattice iCE40 FPGA in an 8×8 mm package along with an 8 Mbit HyperRAM in a 6×8 package. This combination allows for all the chips to fit behind the Boson camera. Add in an microSD card slot and a few connectors and this breakout board is very close to being a commercial product, for whatever forward looking infrared needs you might have.

Here’s a challenge for all you hardware hackers out there. Peter Jansen has opened up the Hot Camera Contest on Hackaday.io to use a thermal imaging camera in a battery-powered project.

The challenge here is simple. Use a Flir Lepton thermal imaging camera module in a battery-powered configuration. There’s a catch, though: this is a project to use the Lepton in radiometric mode, where the camera spits out an actual temperature value for each pixel. Yes, this is a documented feature in the Flir Lepton module, but so far very few people are using it, and no one has done it with a small, battery-powered device.

The rules for this challenge are to use the Flir Lepton 2.5 in radiometric mode using either the Raspberry Pi Zero W or ESP32. Any software in this challenge must spit out absolute temperature values in a text format, and there must be a demonstration of putting the Flir Lepton into low-power mode. There are two challenges here, one for the Raspi and one for the ESP32; and winner will be named for each.

Getting More from a Fascinating Sensor 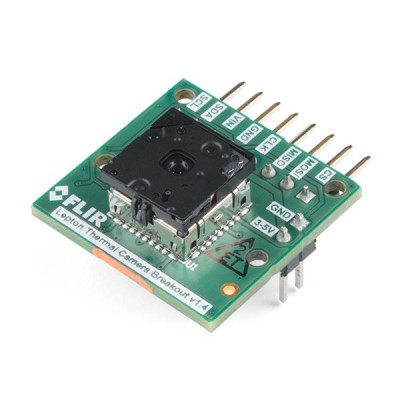 The Flir Lepton is a tiny little thermal camera that’s been available to the Maker community for some time now, first through GroupGets and now through Sparkfun. For a pair of Benjamins, the specs are very impressive: the Lepton has a resolution of 60×80 pixels and everything is can be read over an SPI port. The Lepton gives any project thermal imaging, and the PureThermal board turns the Lepton into a USB device.

Peter Jansen is the creator of the Open Source Science Tricorder (yes, it’s a tricorder) which took Fourth Prize in the 2014 Hackaday Prize. You can understand how he became interested in portable, and we’re sure whatever project he has in mind for this battery-powered Flir will be awesome.

This really is a great example of what the Hackaday.io community is capable of. The goal here is to create useful Open Source drivers for some very interesting hardware, and there’s some prizes to sweeten the pot. Peter has a $125 Sparkfun gift card on offer for each of the two winners. And the challenge of solving a tricky problem and making designs easier for others is a powerful motivator. Who doesn’t like a challenge? 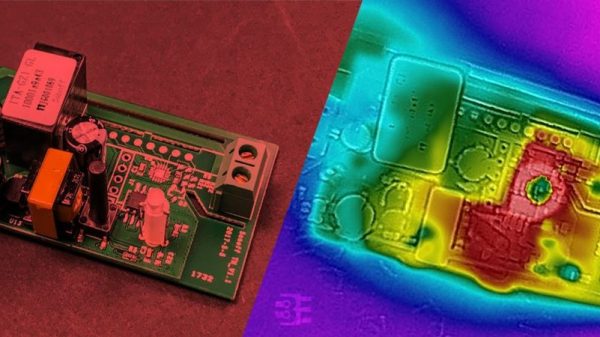 No matter what your experience level with troubleshooting, there’s always at least a little apprehension when you have to start poking through a mains powered device. A little fear is a good thing; it keeps you focused. For some, though, the aversion to playing with high voltage is too much, which can cause problems when something fails. So what do you do when you’re reluctant to even open the case? Easy — diagnose the problem with an infrared camera.

[Bald Engineer]’s electrophobia started early, with some ill-advised experiments in transcutaneous conduction. So when his new Sonoff WiFi switch failed soon after deploying it to control a lamp in his studio, popping the top while it was powered up was out of the question. The piquant aroma of hot plastic was his first clue to the problem, so he whipped out his Flir One Thermal Camera and watched the device as it powered up. The GIF nearby shows that there was clearly a problem, with a bloom of heat quickly spreading out from the center of the unit. A few IR images of the top and bottom gave him some clues as to the culprits, but probing the board in those areas once power was removed revealed no obviously damaged components.

[Bald Engineer] hasn’t yet gotten to the bottom of this, but his current thinking is that the NCP1117 regulator might be bad, since it rapidly spikes to 115°C. Still, we think this is a nifty diagnostic technique to add to our toolkit, and a great excuse to buy an IR camera. Or, we could go with an open-source thermal camera instead.

END_OF_DOCUMENT_TOKEN_TO_BE_REPLACED

One of the entries in the Hackaday Prize Best Product competition is [x-labz]’s pocket thermal imager. It’s more than a prototype, it’s a design conceived to get out into the world and be used by many. Best Product entries are open until July 24th, and with a $30,000 cash prize on the line let’s take a look at some of the things that elevate a project to product status. 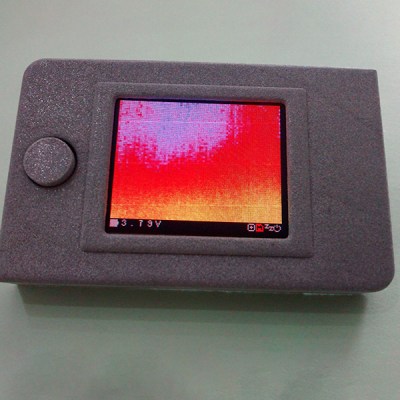 Thanks to recent advances in the state of thermal image sensors, a tool that gives you Predator vision is almost a necessity on the modern workbench. The pocket thermal imager will find drafts in your house during winter, will tell you how to cook a steak, figure out what part is shorting out in your latest electronics project, and will tell you how terrible the heated bed is on your 3D printer.

[x-labz]’s thermal camera is based around the FLIR Lepton image sensor, an 80×60 pixel thermal imaging sensor that’s good enough for most uses. This camera is soldered onto a PCB sandwich containing an Atmel SAMD21 microcontroller, full-color OLED display, SD card, and a battery management system.

What we’ve mentioned so far isn’t out of the ordinary for any other entry in the Hackaday Prize. Building something for the Best Product competition is different, though: a lot of thought has to go into the manufacturability and the fit and finish of this device. So far, everything’s looking great for [x-labz]’s camera. There’s a 3D printed case that looks like it could be easily translated into an injection-moldable shell and at least some of the parts of the user interface are unbelievably satisfying. We’re looking forward to seeing the full Bill of Materials and a business plan (a new requirement this year). That’s an area where many hardware designers lack experience; being able to study the examples from Best Product entries will be a welcomed resource.

There’s a world of difference between building a project and building a product, and the entire goal of the Best Product portion of the Hackaday Prize is to reward those people who go the extra mile as aspiring entrepreneurs and show us how that’s done. $50k in cash prizes are set aside for Best Product; $30,000 for the winner as we mentioned before, but there is also $1000 for each of the twenty entries that make it to the finals in this category in addition to some much deserved notoriety from Hackaday’s community of hardware aficionados and early adopters.

A few years ago, FLIR unleashed a new line of handheld thermal imagers upon the world. In a manufacturing triumph, the cheapest of these thermal imaging cameras contained the same circuitry as the one that cost six times as much. Much hacking ensued. Once FLIR figured out the people who would be most likely to own a thermal imaging camera can figure out how to upload firmware, the party was over. That doesn’t mean we’re stuck with crippled thermal imaging cameras, though: we can build our own, with better specs than what the big boys are selling.

[Max] has been working on his DIY thermal imager for a while now. We first saw it about a year ago, and the results were impressive. This thermal camera is built around the FLIR Lepton sensor, providing thermal images with a resolution of 60 by 80 pixels. These thermal images were combined with a VGA resolution camera to produce the very cool enhanced imagery the commercial unit will get you. There’s also a 1/4-20 threaded insert on the bottom of [Max]’s version, making it far more useful in any experimental setup.

Now [Max] has unleashed his DIY Thermocam on the world of Open Hardware, and anyone can build their own for about €400 (about $425). The components required for this build include a FLIR Lepton sensor easily sourced from the Digikey or GroupGets, an Arducam Mini, a Teensy 3.6, and a mishmash of components that are probably kicking around your parts drawers.

If you want an overview of this project before digging in, [Max] has a project overview (PDF warning) going over the build. This is one of the better DIY projects we’ve seen recently, and the documentation is fantastic. If you’re thinking about buying one of those fancy thermal imaging cameras, here you go — this one is just as good and half off.