[Marco Reps] found an HT02 thermal imaging camera in his mailbox. He found the resolution was fine for looking at big objects but worthless for examining circuit boards. So he decided to just tear it into pieces — an urge we totally understand.

Inside was a thermopile sensor that was easy to reverse engineer. So [Marco] decided to rework a Raspberry Pi robot to use the camera and turn it into a heat seeker.

END_OF_DOCUMENT_TOKEN_TO_BE_REPLACED 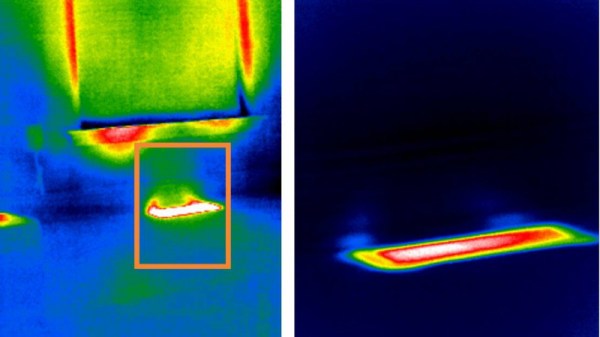 [David Prutchi] writes in to tell us about his recent experiments with building lenses for thermal imaging cameras, which to his knowledge is a first (at least as far as DIY hardware is concerned). With his custom designed and built optics, he’s demonstrated the ability to not only zoom in on distant targets, but get up close and personal with small objects. He’s working with the Seek RevealPro, but the concept should work on hardware from other manufacturers as well.

In his detailed whitepaper, [David] starts by describing the types of lenses that are appropriate for thermal imaging. Glass doesn’t transmit the wavelengths that thermal camera is looking for, so the lenses need to be made of either germanium or zinc selenide. These aren’t exactly the kind of thing you can pick up at the local camera shop, and even small lenses made of these materials can cost hundreds of dollars. He suggests keeping an eye out on eBay for surplus optics you could pull them out of to keep costs down.

Creating the macro adapter is easy enough, you simply put a convex lens in front of the thermal camera. But telephoto is a bit more involved, and the rest of the whitepaper details the math and construction techniques used to assemble it the optics. [David] gives a complete bill of materials and cost breakdown for his telephoto converter, but prepare for a bout of sticker shock: the total cost with all new hardware is nearly $500 USD. The majority of that is for the special lenses though, so if you can score some on the second-hand market it can drop the cost significantly.

We’ve seen an impressive array of thermal camera hacks and projects recently, no doubt due to the falling prices of consumer-level imaging hardware. Given their utility as a diagnostic tool, a thermal camera might be something worth adding to your bag of tricks.

A few years ago, FLIR unleashed a new line of handheld thermal imagers upon the world. In a manufacturing triumph, the cheapest of these thermal imaging cameras contained the same circuitry as the one that cost six times as much. Much hacking ensued. Once FLIR figured out the people who would be most likely to own a thermal imaging camera can figure out how to upload firmware, the party was over. That doesn’t mean we’re stuck with crippled thermal imaging cameras, though: we can build our own, with better specs than what the big boys are selling.

[Max] has been working on his DIY thermal imager for a while now. We first saw it about a year ago, and the results were impressive. This thermal camera is built around the FLIR Lepton sensor, providing thermal images with a resolution of 60 by 80 pixels. These thermal images were combined with a VGA resolution camera to produce the very cool enhanced imagery the commercial unit will get you. There’s also a 1/4-20 threaded insert on the bottom of [Max]’s version, making it far more useful in any experimental setup.

Now [Max] has unleashed his DIY Thermocam on the world of Open Hardware, and anyone can build their own for about €400 (about $425). The components required for this build include a FLIR Lepton sensor easily sourced from the Digikey or GroupGets, an Arducam Mini, a Teensy 3.6, and a mishmash of components that are probably kicking around your parts drawers.

If you want an overview of this project before digging in, [Max] has a project overview (PDF warning) going over the build. This is one of the better DIY projects we’ve seen recently, and the documentation is fantastic. If you’re thinking about buying one of those fancy thermal imaging cameras, here you go — this one is just as good and half off. 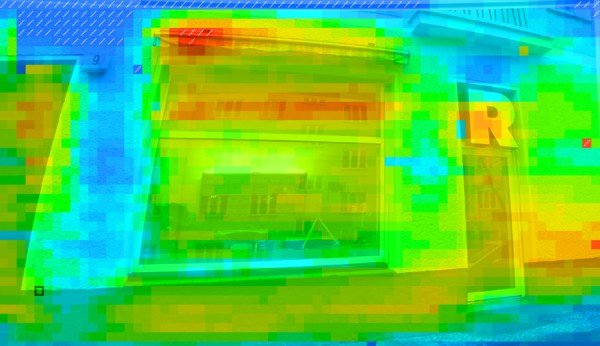 [Niklas Roy] has always wanted to try out thermal imaging and saw his opportunity when he received one of those handheld IR thermometers as a gift. But not content with just pointing it at different spots and looking at the temperatures on the LCD display, he decided to use it as the basis for a scanning, thermal imaging system that would display a heat map of a chosen location on his laptop.

He still wanted to to be able to use the IR thermometer as normal at a later date so cutting it open was not an option. Instead he firmly mounted a webcam to it pointing at the LCD display. He then wrote software on his laptop to process the resulting image and figure out what temperature was being displayed.

Once he got that working, he next put the thermometer on a platform with servos connected to an Arduino for slowly rotating it in the horizontal and vertical directions, also under control of the software on his laptop. Each time the thermometer measures the temperature of a spot, the software decodes the temperature on the LCD display and then tells the Arduino to use the servos to point the thermometer at the next spot to be measured. Each measurement takes a little time, so scanning an entire location as 70×44 spots takes around a half hour. But the end result is a heat map drawn on the laptop, done by a device that is low-tech. [Editor’s Snark: Because attaching a webcam and processing the images is “low-tech” these days.] He can overlay the heat map on a normal photo to see at a glance where the hot spots are.

The software he wrote is available on GitHub and the video below shows it in action. We’ve got to admit, it’s pretty awesome to watch. You can even see the heat map being filled in one measurement at a time.

END_OF_DOCUMENT_TOKEN_TO_BE_REPLACED

High up on the list of desirable technologies that are edging into the realm of the affordable for the experimenter is the thermal camera. Once the exclusive preserve of those with huge budgets, over the last few years we’ve seen the emergence of cameras that are more affordable, and most recently a selection of thermal camera modules that are definitely within the experimenter’s range. They may not yet have high resolution, but they are a huge improvement on nothing, and they are starting to appear in projects featured on sites like this one.

One such device is the Melexis MLX90621, a 16×4 pixel thermal sensor array in a TO39 can with an I2C interface. It’s hardly an impulse purchase in single quantities and nor is it necessarily the cheapest module available, but its price is low enough for [Alpha Charlie] to experiment with interfacing it to a Raspberry Pi for adding a thermal camera overlay to the pictures from its visible light camera.

The wiring for the module is simplicity itself, and he’s created a couple of pieces of software for it that are available on his GitHub repository. mlxd is a driver daemon for the module, and mixview.py is a Python graphical overlay script that places the thermal array output over the camera output. A run-through of the device and its results can be seen in the video below the break.

END_OF_DOCUMENT_TOKEN_TO_BE_REPLACED

We wish we had [Karri Palovuori] for a professor! As an exciting project to get incoming freshmen stoked on electrical engineering, he designed a DIY thermal-imaging smartphone that they can build themselves. It’s all built to fit into a sleek wooden case that gives the project its name: KAPULA is Finnish for “a block of wood”.

It’s just incredible how far one can push easily-available modules these days. [Karri] mounts a FLIR Lepton thermal camera, an LPC1768 Cortex M3 ARM micro, a GSM phone module, and a whole bunch of other cool stuff on a DIY-friendly two-sided board. The design uses 10 mil (0.25mm) trace and space, which is totally achievable with home etching methods. Copper wire bits fill up the vias. Did we mention he’s making the students do all this themselves? How awesome is that?

[Karri] expects that the students will tweak the software side of things. With additional onboard goodies like an accelerometer, microphone, speaker, SIM card, and USB, it’s not likely that they’ll get bored with the platform. He has a stretch hope that someone will take the hardware and modify it. That’s ambitious for sure, but it’s so cool that someone could.

We’ve seen some sophisticated DIY cellphones before, but this one rises above by being easily DIYable and including awesome extra features. Order parts now, and start etching. You could be sending thermal-photo tweets inside of just a few days.