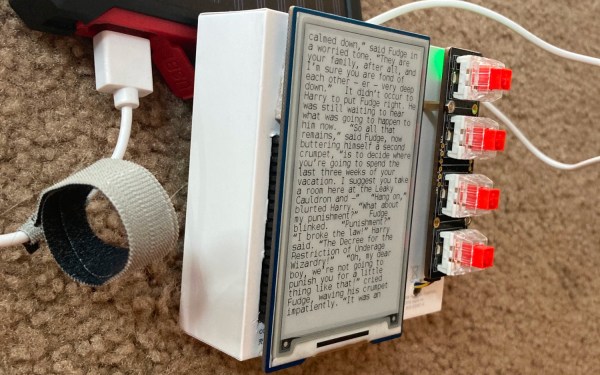 In the early days of e-readers, most devices had physical buttons to turn pages and otherwise navigate the device. [bwkrayb] longed for these halcyon days before touchscreen e-readers and improved on the concept by adding mechanical keyswitches.

By using an Adafruit NeoKey 1×4 as the keyboard interface, the e-reader has four hot-swappable keyboard sockets with built-in LEDs. [bwkrayb] is hoping to use these LEDs to implement a front lighting system in a future revision of the hardware.

The 3.7″ screen displays pages after running an EPUB through ebooklib and Beautiful Soup to generate files that can be used by the Waveshare drivers. Refresh time is reportedly slow, although [bwkrayb] suspects this  might be due more to the limited power of the Raspberry Pi Zero 2 more than the display itself.

If you want to see some other open e-reader projects we’ve covered, check out the EPub-Inkplate or the Open Book Project. 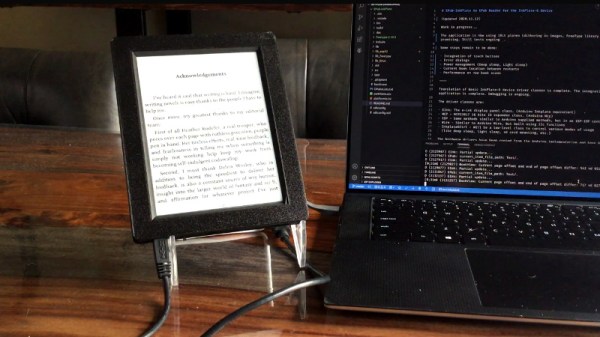 Regular readers will likely remember the Inkplate, an open hardware electronic paper development board that combines an ESP32 with a recycled Kindle screen. With meticulous documentation and full-featured support libraries for both the Arduino IDE and MicroPython, the Inkplate makes it exceptionally easy for hackers and makers to write their own code for the high-quality epaper display.

Now, thanks to the efforts of [Guy Turcotte], the Inkplate family of devices can now boast a feature-rich and fully open source ereader firmware. The project started in October of last year, and since then, the codebase has been steadily updated and refined. Nearing its 1.3 release, EPub-InkPlate has most of the functions you’d expect from a modern ereader, and several that might take you by surprise.

For one thing, [Guy] has taken full advantage of the ESP32 microcontroller at the heart of the Inkplate and implemented a web server that lets you manage the reader’s library from your browser. This allows books in EPUB v2 and v3 formats to be uploaded and saved on the Inkplate’s SD card without any special software. There’s currently support for JPG, PNG, BMP, and GIF images, as well as embedded TTF and OTF fonts.

As of this writing EPub-InkPlate supports both the six and ten inch Inkplate variants, and uses the touch pads on the side of the screen for navigation. While it’s on the wishlist for the final 1.3 release, the project currently doesn’t support the Inkplate 6PLUS; which uses the backlit and touch compatible displays pulled from Kindle Paperwhites. With shipments the new 6PLUS model reportedly going out in November, hopefully it won’t be long before its enhanced features are supported.

With the rising popularity of ebooks, it’s more important than ever that we have open hardware and software readers that work on our terms. While they may never compete with the Kindle in terms of units sold, we’re eager to see projects like EPub-InkPlate and the Open Book from [Joey Castillo] mature to the point that they’re a valid option for mainstream users who don’t want to live under Amazon’s thumb.