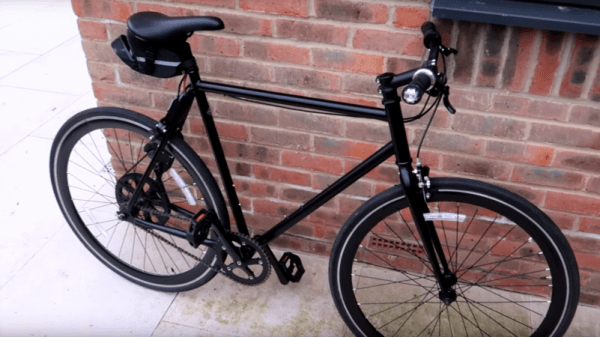 Challenge: Perform an electric conversion on a bicycle. Problem: No significant metal working skills or equipment. Solution: 3D print everything needed to electrify the bike.

At least that’s the approach that [Tom Stanton] took to his electric bike build. Having caught the electric locomotion bug on a recent longboard build, [Tom] undertook the upgrade of a cheap “fixie,” or fixed-gear bike. His delta printer was big enough for the motor mount and weather-resistant ESC enclosure, but he needed to print the drive pulley in four quadrants that were later glued together. We can’t say we hold much faith in the zip ties that transmit all the torque through the rear wheel’s spokes, but as a proof of concept it seems sturdy enough. With a throttle from an electric scooter and a battery in a saddle bag, the bike turns in pretty decent performance — at least after a minor gearing change. And everything blends in or accents the black frame of the bike, so it’s a good-looking build to boot.

Want to catch the cheap electric personal transportation bug too? Check out this electric longboard, or this all-terrain hoverboard.