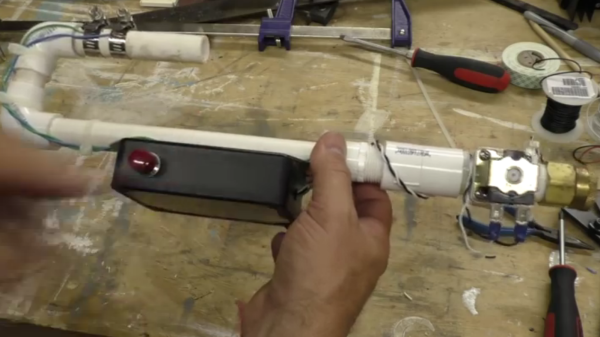 [Bob] built this simple device that can best be described as an electronic float valve. He was wasting a lot of water from overflowing water troughs and buckets around his farm. He would usually put the hose in the container, turn on the water valve and carry on with his work. By the time he remembered to come back, the area would be flooded. It’s obvious that there’s many different ways to solve a problem. For example, a simple mechanical float valve might have worked, but it’s not horse friendly and liable to get damaged soon.

The electronics is unabashedly minimal. An ATtiny85 controls a relay via a common variety NPN transistor. The relay in turn switches the solenoid valve. A push-button tells the microcontroller to start the water flowing, and when the water level gets high enough that it touches two hose clamps, the micro shuts it off again.

There’s some ghetto engineering going on here. The electronics is driven by a 9V battery, although the relay and the solenoid valve that [Bob] used are both rated for 12V. He’s not even using any sort of voltage regulation for the ATtiny, but instead dropping the voltage with a resistor divider. (We wonder about battery life in the long run.)

He built all of it on perf board and stuffed it inside a small enclosure, with two wires coming out for the level sensor and another two for the solenoid, and it seems to work. Check the video below where [Bob] walks through his build.

While some may point out the many short comings in this build, [Bob] found the one solution that works for him. Sometimes the right solution is what you’ve got on hand, and we’re glad he’s hacking away and sharing his work. And check out this wireless water level sensor that he built some time back.