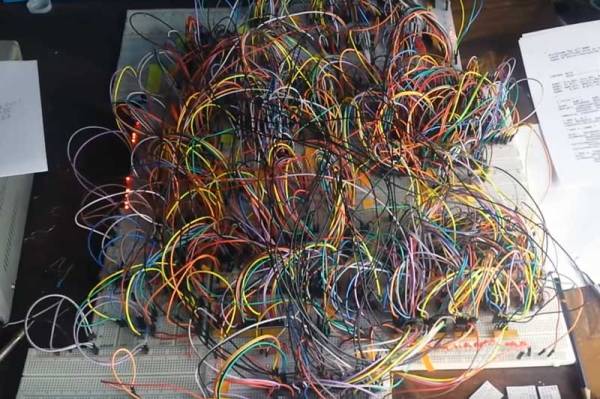 Did you ever start a project that you felt gained a life of its own? This project by [Paulo Constantino] is an entire CPU named dreamcatcher on breadboards, and is a beautiful jungle of digital. On top of that, it works to connect to an analog VGA display. How cool is that!

Designing an ALU and then a CPU is a typical exercise for students of digital design and is done using VerilogHDL or VHDL. It involves creating an ALU that can add, subtract etc while a control unit manages data moves and the like. There is also a memory fetch and instruction decode made up of de-mulitiplexers and a bunch of flip-flops that make up registers and flags. They are as complex as they sound if not more.

[Paulo Constantino] went ahead and designed the whole thing in Eagle as a schematic using 74HC logic chips. To build it though instead of a PCB he used breadboards. Everything from bus decoders to controlling an external VGA display is done using jumper wires. We did cover a video on the project a while back, but this update adds a video card interface to the build.

The CPU updates the display buffer on the VGA card, and in the video below shows the slow and steady update. The fact that the jungle of wires can drive a display is awesome. He has since started working on a 16-bit version of the processor and we’d love to see someone take it up a notch.

For those more accustomed to the PCB, the Z80 membership card project is a great build for 8-bit computer fans.

Thanks to [analog engineer] for the tip.

END_OF_DOCUMENT_TOKEN_TO_BE_REPLACED

It might look like a random pile of wires to some, but it is far from random: [Paulo Constantino] built this 8-bit CPU himself from scratch. He built his remarkable creation using wires and 74HC shift register chips, plus a selection of LEDs to show the various registers.

Running at a maximum of 5MHz, it has an 8-bit data and address bus, although the latter can be expanded to 16 bits. It’s not mining Bitcoin (yet), but it can do things like play the Mario theme. His latest addition is the addition of the ability to write data out to flash memory, and he is looking to add a keyboard to make programming easier.

At the moment, he has to program the CPU by setting DIP jumpers. It’s an impressive, if somewhat frightening build that [Paulo] says took him a couple of days to design and a week or so to build. We’ve seen a few breadboard CPU builds, (some of which were tidier) and builds with similar shift register chips, but this one scores big in the blinky light and mad genius stakes.

Thanks to [AnalogMind] for the tip!