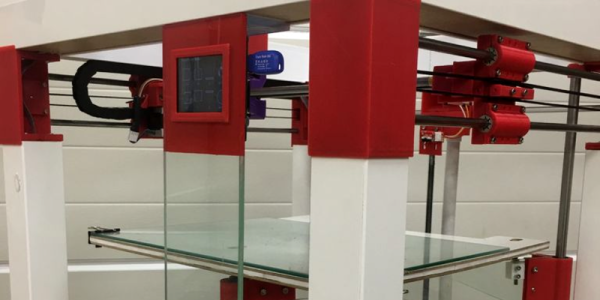 In this Instructable, [Wayne Mason-Drust] shares the step by step guide on how to make a cool, good-looking, 3D printer based on the Ikea LACK table. From an Ikea lantern weather station to a fully printed CNC based on an Ikea table, it’s almost safe to say that a 3D printer Ikea hack was overdue.

The idea to use a Ikea table as a base for a 3D printer first came to [Wayne] as he used this table to support other 3D printer he had working in his business. He realized that, even after five years of use, the table showed no signs of wear or distortion. So he decided to start to work on a 3D printer based on this precise table, the one that used to hold the printer.

[Wayne] stacked two together and named it Printtable (pun intended?). This open source, cartesian rep-rap 3D printer looks pretty slick. With a build area of 340mm X 320mm and 300mm on the Z axis and a price tag for the parts starting as low as $395, seems like a pretty decent 3D printer. With some work sourcing the parts, maybe it can be even lower.

Or we can just wait until Ikea starts selling them.

END_OF_DOCUMENT_TOKEN_TO_BE_REPLACED

Building a render cluster doesn’t mean you have to spend a lot of money, even if you’re buying brand new hardware. [Janne] built this 6 unit cluster inside of a 6 drawer IKEA Helmer cabinet. He wanted the cluster to be low power and low cost. After finding a good price on 6 65nm Intel Core 2 CPUs, he found 6 cheap Gigabyte motherboards. The memory on each board was maxed at 8GB. With 24 2.4GHz cores consuming 400W, the power consumption and cost isn’t much more than a high end PC. Each board is running Fedora 8 and mounts an NFS share. Dr Queue is used to manage the render farm’s processes. [Janne] says jobs that previously took all night now only require about 10-12 minutes. The estimated capacity is 186Gflops, but plans are already in motion for a12Tflop version.

His site also has plans for an underwater camera housing like our recent post. If you want to see more IKEA abuse, check out IKEA Hacker, even if it’s not very technical.

[UPDATE: yep, we duped ourselves]