There was a time when crowdfunding websites were full of 3D printers at impossibly low prices. You knew that it would turn out to be either blatant vaporware or its delivery date would slip into the 2020s, but still there seemed always to be an eager queue ready to sign up. Even though there were promised models for under $200, $150, and then $100, there had to be a lower limit to the prices they were prepared to claim for their products. A $10 printer on Kickstarter for example would have been just a step too far.

There is a project that’s come close to that mark though, even though the magic figure is 10 euros rather than 10 dollars, so just short of 12 dollars at today’s exchange rate. [Michele Lizzit] has built a functioning 3D printer for himself, and claims that magic 10€ build price. How on earth has he done it? The answer lies in extensive use of scrap components, in this case from broken inkjet printers and an image scanner. These provide all the mechanical parts for the printer, leaving him only having to spend his 10€ on some hot end parts and the printer’s electronics. In an unusual move, the frame of the machine appears to come from a set of cardboard biscuit boxes, a master stroke of junk box construction.

The claimed resolution is 33µm, and using the position encoders from the inkjet printers he is able to make it a closed loop device. We salute his ingenuity in building such an impressive printer from so little, and were we ever locked by the bad guys in a room full of IT junk and lacked a handy escape device, we’d wish to be incarcerated with [Michele] any day over [Angus MacGyver] or [Sgt. Bosco BA Baracus].

You can see the printer in action in the video below the break.

END_OF_DOCUMENT_TOKEN_TO_BE_REPLACED 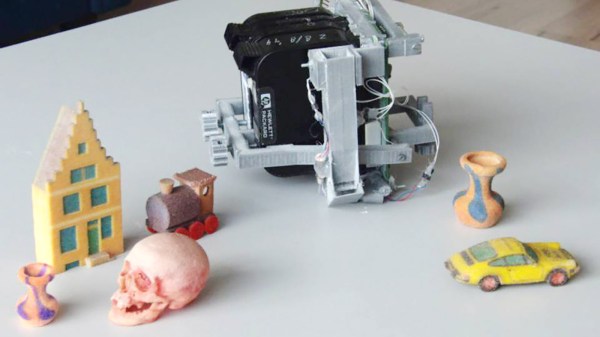 Most hobby 3D printers are based on FDM, extruding a single-color noodle of melted plastic to build up an object. Powder-based inkjet 3D printing allows you to print detailed, full-color models from a plaster-like material. The process uses ink and water droplets, dispensed from an inkjet print head to selectively fuse and color layers of a powdered binder material. When you see an offer for a 3D printed miniature version of yourself (or someone else), they are made with powder. [Aad van der Geest] wants to put this technology on your desktop with ColorPod, a kit that converts your FDM printer into a powder printer.