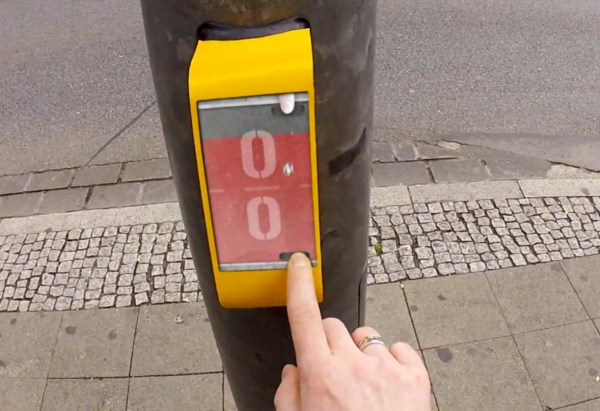 What is there to do in America while you’re waiting to cross the street at an intersection? Nothing; listen to that impatient clicking sound, and if you live in a busy city, pray you don’t get plowed into. In Germany however, pedestrians will now get to play Pong with the person on the other side.That’s right, as a means to encourage people to just hang in there and wait out the cycle instead of darting across against the light, design students [Sandro Engel] and [Holger Michel] came up with an entertaining incentive involving a potential conversation sparking duel with your impromptu counterpart across the street.

The first of these interactive cross-walk indicators was installed recently in Hildesheim, Germany, two years after the duo first designed them back in 2012. There was a little friction about installing the touch screen equipped modules initially, but after a proper redesign for functionality taking traffic science into account, the city authorities caved and allowed them to test the wings of their progressive idea on one city intersection so far. The mindset behind the invention of these indicators is part of a larger movement to make public spaces safer through means of fun and entertainment. Instead of threatening to punish those partaking in unsafe activity with fines, the notion is to positively enforce following rules by adding a level of play. While pedestrians have the right to walk, the screen shows how much time is left to make their away across, and for the duration that traffic is rolling through, the score will be kept for an individual game of pong for those on either side of the light.

Since the idea is generating some interest, the group of developers involved with the project have moved to promote their work (now branded as Actiwait) with an Indiegogo campaign. They hope to turn their invention into a full fledged product that will potentially be seen all over the world. Admittedly, it’d be charming to see this sort of technology transform our urban or residential environments with a touch of something that promotes friendly social interaction. Hopefully my faith in our worthiness to have nice things is warranted and we start seeing these here in America too. Nice work!

Check out this encounter with the street indicator here. The guy introducing the invention loses to the girl on the other side, but they share a high-five as they pass in the street:

END_OF_DOCUMENT_TOKEN_TO_BE_REPLACED

This is a fantastic high school project. [Shmendrik213] built and robot a programmed it to follow common traffic rules. The robot drives itself with a DC motor, using one servo for steering and another to pan a webcam back and forth. The netbook that comes along for the ride is running a VB.NET program that can detect an upcoming intersection, read the street sign, and react based on other cars currently at the intersection.

The hardware is running on an Altera processor using firmware programmed in VHDL. We remember building a tissue box holder for one of our high school projects. Looks like the times have changed since then.