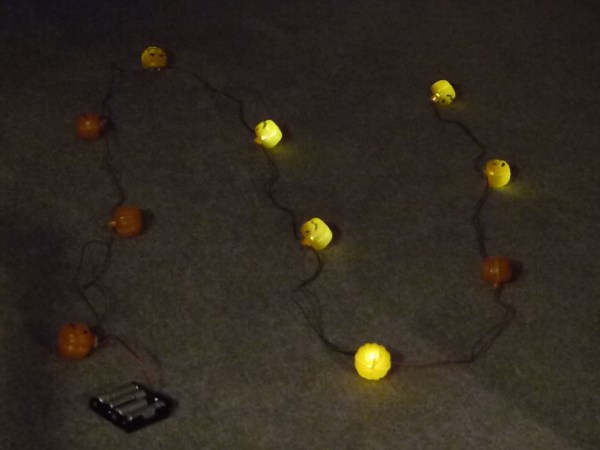 The countdown is on! There’s only a few days left until Halloween, and if you’re still looking for something to spice up the experience for the kids heading to your door, [MagicWolfi] has just what you need. He’s put together two motion-sensing projects that are sure to startle any trick-or-treater.

The first project is a chain of LED-lit pumpkins that are activated by a motion sensor. A set of inverters paired with RC delay lines light up the pumpkins sequentially. They are arranged almost like a strand of Christmas lights and are powered by AA batteries, so in theory they could be expanded to make a strand as long as needed. The project was inspired by a motion-sensing dress and works pretty well as a Halloween decoration! 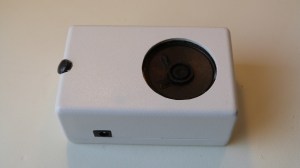 [MagicWolfi] is pairing the LED pumpkins with his second project which uses another motion sensor to play scary sound effects. Dubbed the Scare-o-Matic, this device uses a 45-millimeter speaker connected to a SparkFun microSD audio module to produce the scary sound effects. Each time it is triggered it plays a different sound from the list. There are videos and schematics for each of these projects on the project sites if you are interested in recreating any of these before Friday!

Yes, it’s a little late for Halloween, but before you throw out that rotting gourd sitting outside your front door, how about planning for next year’s festivities with a dragon-o-lantern?

The first dragon-o-lantern that made its way into our tip line is a fire breathing dragon jack ‘o lantern built by [Aaron] for a pumpkin carving contest. The idea is simple; just carve a dragon head out of a pumpkin, insert candle, and spray the open flame with a can of Aquanet. Sure, it’s crude, but with a little engineering it could turn out to be a very, very cool build.

For a slightly more complex build, [Chris] built a fire-breathing jack ‘o lantern triggered by anyone saying the words, “trick or treat.” The key part of this build is a Microsoft Kinect, used for its voice recognition capabilities instead of its capacity to form a 3D depth cloud.

The fire portion of [Chris]’ build is controlled by an Arduino triggering a solenoid to dispense a small amount of fuel into the pumpkin shell. [Chris] doesn’t go over the construction of his ‘poofer,’ but any member of your local hackerspace should be able to show you how it’s done.

Videos after the break.

END_OF_DOCUMENT_TOKEN_TO_BE_REPLACED

What do you get when you combine motion sensors , a Raspberry Pi, and a pumpkin? When it’s Haloween, a headless scarecrow with a light-up carved pumpkin in its lap! The execution of this hack is really great, and the resulting effect, as shown in the video after the break, should be extremely scary to any kids that come knocking.

One neat effect of this hack is that it uses X10 home automation modules to turn off the porch lights for an extra scary effect. After this, the jack-o-lantern lights up and says “help me!” If you’d like to duplicate, or build on this hack, instructions are provided as well as source code for everything on the page. While you’re there, be sure to poke around on [Insentricity] as there are quite a few other hacks available for your perusal! Don’t forget sure to send us any other Halloween hacks that you come up with. The Halloween parties this weekend are over, but that doesn’t mean there’s not time for a few more to finish a build before children start knocking on doors tonight. [formori] at Lakehead University wanted to do something spectacular for a pumpkin carving contest, so he and a few other EE students came up with a tiki-o’-lantern with music.

The guys at Lakehead figured a color organ flashing LEDs in the eyes and mouth of the tiki would be a very good and easy project. The circuit they used is a simple Op-amp setup like one we’ve seen earlier. The entire pumpkin is powered by a 9 V battery and the music is played with an iPod. There are two colors of LEDs – high frequencies flash a blue LED in the eyes and low frequencies flash a red LED in the mouth.

Aside from the added A/V stuff, [formori]’s pumpkin is one of the best we’ve seen on Hack a Day this year. Check out the Youtube of 1st place winner of the Lakehead pumpkin carving contest after the break.

END_OF_DOCUMENT_TOKEN_TO_BE_REPLACED

[Richard] combined creative carving with vacuum tube electronics for a unique pumpkin offering. He used the stencil-and-cut method of carving, making use of an inexpensive carving kit for great results. He salvaged an LED module from a flashlight to provide the internal illumination, but it’s the center feature that we like the best. [Richard’s] used a glow-transfer counting tube, or dekatron, which provides something like a circular cylon eye to the project. There’s a video of this after the break.

You might not have access to a wicked-looking dekatron but we’re guessing you’ve got a microcontroller and some LEDs lying around that can serve as a stand-in for one night. We’d love to do a reader jack-o-lantern roundup, so if you build something, send us a picture!