Disclosure: I currently work at Upverter

We’ve featured Upverter here in the past. At that time, the EDA tool was capable of collaborative schematic capture. Today, Upverter is launching version 2.0 of their tool which includes many new features allowing for end-to-end electronics design.

Upverter now has a PCB editor, allowing you to manufacture your designs. They are working with PCB manufacturers to make it easy to choose a fab and submit design files. Other new features include a Spice based simulation engine allowing in-browser simulation, and product lifecycle management features to help manage your project’s bill of materials.

When we last looked at Upverter, it was just a tool for creating and sharing schematics. With today’s launch, the tool can be used for designing electronics from start to finish. Since Upverter is free for open source projects, it will be interesting to see how hackers use it.

You can check out a tour of the new features. Any thoughts on using a cloud based EDA tool? Let us know in the comments.

Making your own boards at home is among the heights of achievement for home tinkerers, and one fraught with frustration. The toner transfer process requires carefully peeling away layers of photo paper, and milling your own circuit boards is an exercise in complexity. One of the best options is using photosensitive copper boards, but this requires exposing the masked-off copper to fairly intense UV light. A UV exposure box is a wonderful project, then, and something [Carlo] just about has wrapped up.

The first portion of [Carlo]’s build involved placing 135 UV LEDs on a piece of protoboard. This UV source eats up a surprising amount of power; [Carlo] is using 12V for the supply, so an old industrial power supply is more than capable of dishing out the 1.5 Amps required for the build.

Next, [Carlo] needed a timer for his exposure box. He settled on a design based on an ATMega8 turning a high voltage transistor on and off with a character LCD for the user interface. A few buttons allow [Carlo] to set the countdown timer, after which the LEDs turn on for a set period of time.

All this was packaged into a small box [Carlo] picked up from Ikea. It’s a very useful build, and judging from the video after the break, extremely easy to use.

END_OF_DOCUMENT_TOKEN_TO_BE_REPLACED

Classic computers are just up [Jeff]’s alley, so when he looked for a new project for his Pocket Mini Computer, he looked at one of the earliest microcomputers available: the COSMAC VIP, a 1.76 MHz beast from 1977.

The COSMAC VIP was a single-board educational computer released by RCA in 1977. Priced at just a hair under $300, the COSMAC was much more affordable than infamous $1300 ‘fruit’ computer also released that year. To get young programmers up and running quickly, the COSMAC came bundled with the CHIP-8 programming language, making it very easy to generate graphics on-screen for all the eventual PONG and Breakout clones.

Because the COSMAC’s user interface was the very, very old-school 4×4 hexadecimal keypad, [Jeff] found it necessary to emulate this retro feature by soldering his own 4×4 keypad. After soldering 16 buttons into 8 columns and rows, [Jeff] connected this keyboard to a PFC8574a I2C I/O expander and connected this chip to the I2C bus on the Pocket Mini Computer.

The result is an emulated COSMAC VIP that’s just begging for an ‘introduction to microprocessors’ class or just a round of Tetris, Tic-tac-toe, Lunar Lander, or one of the several Breakout clones available for this very cool computer. A pretty awesome build, even if it is from the dawn of the computer age.

Never one to pass up the recycle pile at work, [Scott] usually doesn’t find much. A few old hard drives, maybe a ancient laptop every once in a while, but on very rare occasions he finds something actually useful. This latest haul is a gaggle of stepper motor drivers that, with a bit of work, can be reverse engineered and turned into an Arduino.

After prying into one of the plastic-enclosed boards, [Scott] found a LED, a quartet of transistors for powering the motor, and an ATMega168 microcontroller. Interestingly, most of the pins for the 168 were already broken out on the DA15 connector on each controller. The only thing needed was to build a programmer to dump the Arduino bootloader onto these little widgets.

After much trial and error (and building a new programming interface), [Scott] now has 100 Arduinos with a single stepper motor controller built in. He’s already made a toy light cycle rotate on a small stepper (after the break) and blink a LED, but with this many widgets, we’re wondering what crazy contraption [Scott] will come up with.

END_OF_DOCUMENT_TOKEN_TO_BE_REPLACED

Yes, it’s a little late for Halloween, but before you throw out that rotting gourd sitting outside your front door, how about planning for next year’s festivities with a dragon-o-lantern?

The first dragon-o-lantern that made its way into our tip line is a fire breathing dragon jack ‘o lantern built by [Aaron] for a pumpkin carving contest. The idea is simple; just carve a dragon head out of a pumpkin, insert candle, and spray the open flame with a can of Aquanet. Sure, it’s crude, but with a little engineering it could turn out to be a very, very cool build.

For a slightly more complex build, [Chris] built a fire-breathing jack ‘o lantern triggered by anyone saying the words, “trick or treat.” The key part of this build is a Microsoft Kinect, used for its voice recognition capabilities instead of its capacity to form a 3D depth cloud.

The fire portion of [Chris]’ build is controlled by an Arduino triggering a solenoid to dispense a small amount of fuel into the pumpkin shell. [Chris] doesn’t go over the construction of his ‘poofer,’ but any member of your local hackerspace should be able to show you how it’s done.

Videos after the break.

END_OF_DOCUMENT_TOKEN_TO_BE_REPLACED 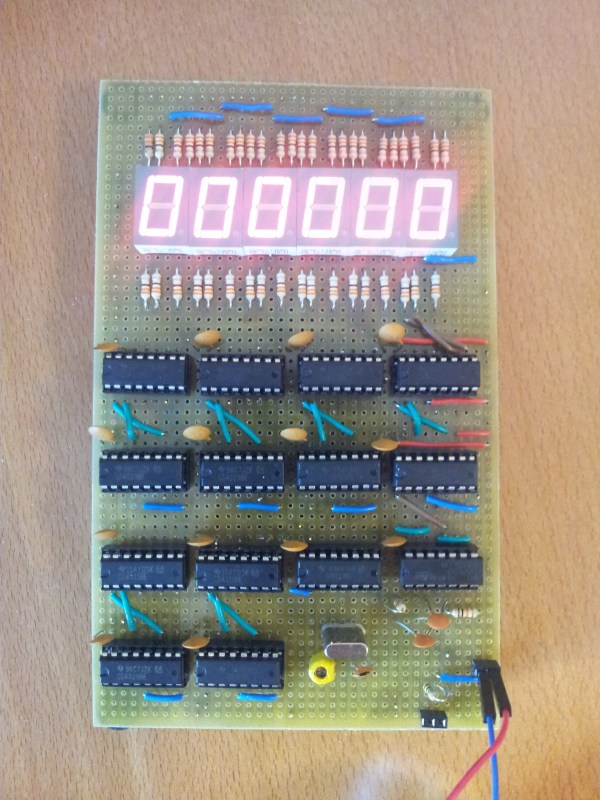 This frequency counter is [Miguel Pedroso’s] entry in the 7400 Logic contest. After looking at the design we think this is a perfect project for those who have not worked with logic ICs before. The concept is simple and [Miguel] does a great job of explaining his implementation.

At its heart the device simply counts the oscillations of an input signal for one second, then latches the total to the 7-segment displays before zeroing the counter block and starting over. Six 4029 decade counters give the device a range of 1MHz. A set of 4511 BCD to 7-segment decoders translate the count to the display. A 4521 frequency divider chip uses an on-board 4.194304 MHz crystal oscillator to time both the display latching and the counter clearing. [Miguel] mentions that tuning the load capacitors is a bit tricky. Since breadboards have their own capacitance issues it may be necessary to change the load capacitor values when moved to protoboard or the crystal won’t start oscillating. You can see those caps are not the same value, but the tests in the video after the break show that this is pretty much spot-on.

If you’d rather give this a try in HDL here’s an FPGA-based frequency counter from which you can draw some inspiration.