Is there any garment so freeing to wear as a skirt, assuming it isn’t skin tight? (Well, unless that’s your thing — we won’t judge.) Skirts and dresses are pretty darn freeing compared to pants, so it’s too bad that most of them come without pockets. And it’s really too bad that pretty much all skirts and dresses come without RGB LEDs that can react to movement. Maybe someday.

Until then, we’ll just have to design our own LED skirt like [makeTVee] and his girlfriend did, and hope that it looks half as good. This skirt has six RGB LED strips running down the front for a total of 120 LEDs. The strips are held in place with hook and loop tape and all the electronics — an Adafruit QT Py, a 6-DOF IMU, and a USB power bank — are tucked into the waistband and can be easily removed when it’s time to wash the skirt. Continuing with the practicality theme, there are no LEDs on the back, though they could easily be added in for getting down on the dance floor.

We really love the fabric choices here. The overlay fabric looks good on its own, but it also does a great job of showing and diffusing the light, while at the same time hiding the LED strips themselves. It’s clear that they took comfort and practicality into consideration and made a wearable that’s truly wearable. [makeTVee] calls this a work in progress, but has already got a few nice animations going, which you can see in the video after the break.

If you don’t care whether your wearables are practical, try this fiber optic jellyfish skirt on for size.

END_OF_DOCUMENT_TOKEN_TO_BE_REPLACED 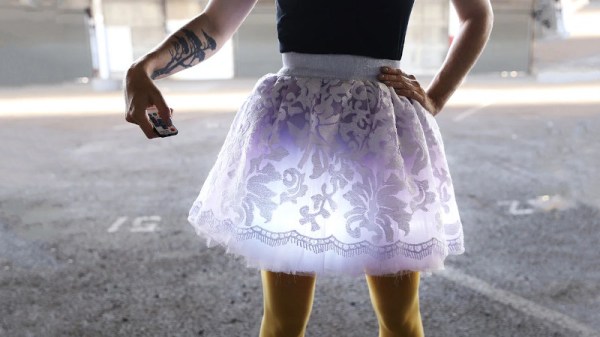 Versatility is always a boon in any outfit. [Mikaela Holmes] wanted to create a skirt that could be unassuming by day, but be the life of the party when the lights go down. Her Day-To-Night Light Skirt achieves just that!

The build is one that should be achievable by anyone with basic dressmaking skills. White and lavender tutus are combined to form the base of the skirt, with a lace outer layer sewn on to create an attractive silhouette for the lights. A USB battery pack is hidden in a pocket in the back to power the show. A WS2812B LED strip is then attached to the skirt, and hidden behind an additional layer of white faux-fur to help diffuse the light.

A pre-programmed LED controller from Cool Neon is used to run the strip, meaning no microcontroller code is required. It also allows the skirt’s lighting effects to be controlled by remote. Such controllers can make getting a glowable project up and running more quickly, particularly for those with less experience in the microcontroller space. Plus, the project can always be upgraded with a fancier controller later. For the most part, the vast majority of glowable projects use similar flashing and fading animations anyway; there’s really no need to reinvent the wheel every time.

[Mikaela] does a great job of showing the necessary steps to produce a skirt that is both attractive and functional. We’ve seen other great projects in this space before, too – like this awesome fibre optic piece. If you’re sewing up your own impressive glowable fashions, be sure to let us know! Video after the break.

END_OF_DOCUMENT_TOKEN_TO_BE_REPLACED 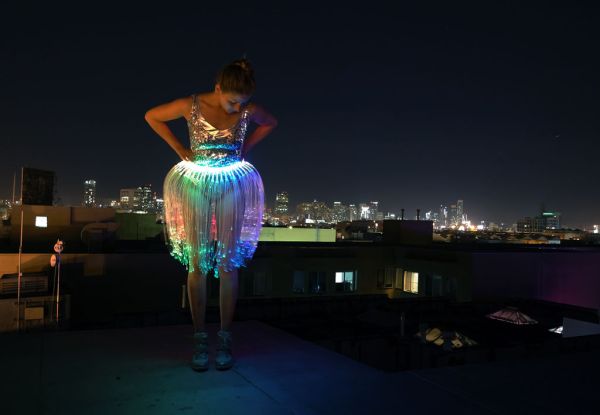 [Lumilectric] is getting ready for Burning Man and made herself this fantastic fiber optic LED skirt.

She’s always been fascinated by fiber optics and the effect they create, so she wanted to try using them in a project, and this was just the ticket. The tricky part was figuring out how best to couple cheap fiber optic strands off eBay with a strip of RGB LEDs.

In the end she figured out a way to make rudimentary fiber optic coupling joints using vinyl tubing. She managed to fit 17 strands of 0.5mm diameter fiber into a 6mm diameter vinyl tube. To improve light transfer when it’s all together, you can gently melt the ends of the fiber optics together to glaze the plastic into a single clear surface — don’t melt the vinyl though!