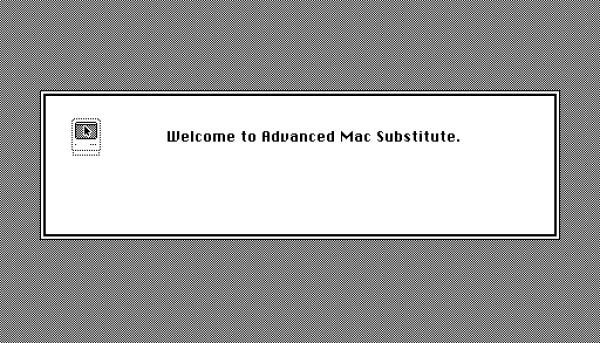 The Macintosh Classic – a small all-in-one computer with a 9″ monochrome screen –  was one of the more interesting machines ever released by Apple. It was the company’s first venture into a cost-reduced computer, and the first Macintosh to sell for less than $1000. Released in 1990, its list of features were nearly identical to the Macintosh Plus, released four years earlier. The Classic also had an interesting feature not found in any other Mac. It could boot a full OS, in this case System 6.0.3, by holding down a series of keys during boot. This made it an exceptional diskless workstation. It was cheap, and all you really needed was a word processor or spreadsheet program on a 1.44 MB floppy to do real work.

[Steve] over at Big Mess O’ Wires had the same idea as the Apple engineers back in the late 80s. Take a Macintosh Plus, give it a bit more ROM, and put an OS in there. [Steve] is going a bit farther than those Apple engineers could have dreamed. He’s built a rewritable ROM disk for the Mac Plus, turning this ancient computer into a completely configurable diskless workstation.

The build replaces the two stock ROM chips with an adapter board filled with 29F040B Flash chips. They’re exactly what you would expect – huge, old PDIPs loaded up with Flash instead of the slightly more difficult to reprogram EEPROM. Because of the additional space, two additional wires needed to connected to the CPU.  The result is a full Megabyte of Flash available to the Macintosh at boot, in a computer where the normal removable disk drive capacity was only 800kB.

The hardware adapter for stuffing these flash chips inside a Mac Plus was made by [Rob Braun], while the software part of this build came from [Rob] and [Doug Brown]. They studied how the Macintosh Classic’s ROM disk driver worked, and [Rob Braun] developed a stand-alone ROM disk driver with a new pirate-themed startup icon. [Steve] then dug in and created an old-school Mac app in Metrowerks Codewarrior to write new values to the ROM. Anything from Shufflepuck to Glider, to a copy of System 7.1  can be placed on this ROM disk.

This isn’t the first time we’ve seen ROM boot disks for old Macs. There was a lot of spare address space floating around in the old Mac II-series computers, and [Doug Brown] found a good use for it. Some of these old computers had optional ROM SIMM. You can put up to 8 Megabytes  in the address space reserved for the ROM, and using a similar ROM disk driver, [Doug] can put an entire system in ROM, or make the startup chime exceptionally long.