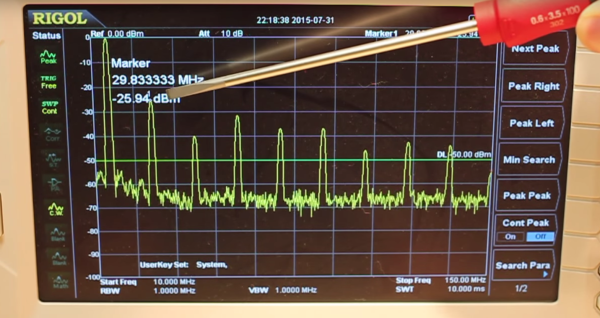 In general, you get what you pay for, and when [Craig] picked up a cheap function generator off eBay, he didn’t expect much from it. But as he shows us in his blog post and a series of videos below, while the instrument lived down to his expectations, he was able to fix it up a bit.

Having spent only $100USD for the MHS-5200A, [Craig]’s adventure is a complete teardown and analysis of the function generator. While it sort of lives up to its specs, it’s pretty clear that some design decisions resulted in suboptimal performance. At higher frequencies and higher amplitudes, the sine wave output took on a markedly non-sinusoidal character, approaching more of a triangle waveform. The spectrum analyzer told the tale of multiple harmonics across the spectrum. With a reverse-engineered schematic in hand, he traced the signal generation and conditioning circuits and finally nailed the culprit – an AD812 op-amp used as the final amplifier. An in-depth discussion of slew rate follows in part 2, and part 3 covers replacement of the dodgy chip with a better selection that improves the output signal. We’re also treated to improvements to a low-pass filter that fixed a nasty overshoot and ringing problem with the unit’s square wave function.

If hacking the MHS-5200A seems a bit familiar to you, that’s because we covered another reverse-engineering exploit of it recently. That hack of the serial protocol of the instrument was by [WD5GNR], also known as Hackaday’s own [Al Williams]. Cheers to both [Craig] and [Al] for showing us what you can do with a hundred bucks and a little know-how.

END_OF_DOCUMENT_TOKEN_TO_BE_REPLACED 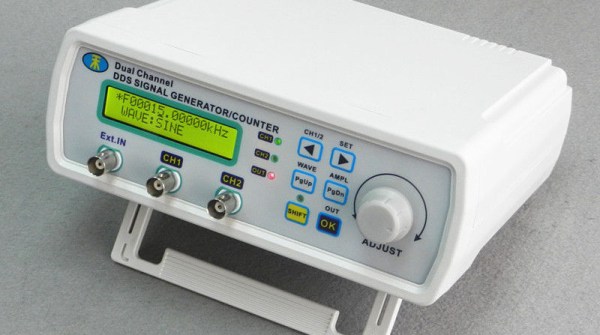 Signal generators are a useful piece of kit to have on your electronics bench. The downside is that they tend to be rather expensive. If you have $100 to drop on a new toy, the MHS-5200A is a low cost, two channel, 25 MHz generator that can be found on eBay.

The downside is the software. It’s an ugly Windows interface that’s a pain to use. The good news is that [wd5gnr] reverse engineered the protocol so you don’t have to. This means other software can be developed to control the device.

When connected to a computer, this function generator shows up as a virtual USB serial port. The documentation that [wd5gnr] assembled lists all the serial commands you can send, and what they do. If you aren’t into manually setting waveforms from a serial terminal (who is?) there’s a tool for doing that automatically on Github. This takes in a CSV file describing a waveform, and programs the generator to make it for you.

The software is also compatible with Waveform Manager Plus, a free GUI tool for defining waveforms. Putting this all together, you can have a pretty capable waveform generator for less than $100.